Transit systems, broken windows, and the burden of homelessness 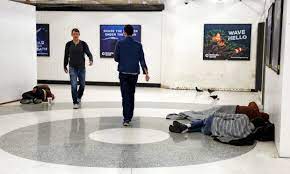 A few weeks ago, I started writing a blog entry about how BART, the Bay Area Rapid Transit system, has created a "senior manager of social service partnerships" to deal with homelessness on the system ("Meet BART’s first-ever homelessness czar," San Jose Mercury News).  From the article:

As the entire state grapples with a homelessness crisis made worse by the COVID pandemic, BART is trying a new strategy to address the hundreds of unhoused people seeking refuge on its trains and in and around its stations. The transit agency is on the front lines, grappling with everything from people suffering mental health crises on BART platforms to encampment fires encroaching on tracks and disrupting train service.

Now, BART is drafting a “Strategic Homeless Action Plan” to take a more proactive approach to the issue. The new initiative includes hiring 20 crisis intervention specialists, partnering with social service agencies to deliver resources to people in need, and improving the data BART collects on how the homelessness crisis impacts its system. ...

[From the interview]  "BART is reflective of the Bay Area, so homelessness is huge and we’re seeing hundreds and hundreds of unsheltered individuals every day. I think especially in light of the pandemic, with so many shelters closing and capacity being limited, BART has been the one constant that’s been open."

Q: BART obviously is a transportation agency, not a human services or housing organization. So why is it BART’s responsibility to tackle the homelessness crisis?

A: I think it was just too much to ignore at a certain point. The status quo wasn’t working. There are still so many pressing issues that we’re experiencing, our staff is experiencing, and our riders are experiencing. And so as more people are getting on BART every day as we sort of hopefully put COVID in the back view, it’s really important for us to have a strategic plan and actions behind that to address some of these issues. We’re not going to be the social service entity ever. But we need to know how to move to be able to guide the resources to BART and our riders.

Similarly SEPTA has announced an increase in funding for services to deal with homelessness on their transit system, including the hiring of up to 57 outreach workers focusing on connecting homeless people to services and reducing their negative impacts ("SEPTA will spend $3.6 million to bulk up social services for homeless people and drug users," Philadelphia Inquirer).

These are attempts to make the transit system safer and more congenial for riders.

At first, I thought this was pretty amazing, but the reality is that it is a necessary response to the failure of other parts of society and government to take care of this, and it puts extra burden and costs, reflected in higher fares, on transit systems.

But rampant and visible drug use at BART stations is nothing new ("BART Officials Appalled by Video of Rampant Drug Use at Civic Center," KPIX-TV/CBS) 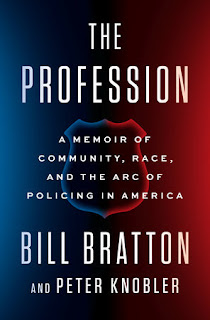 I have been reading Police Chief William Bratton's latest book, The Profession: A Memoir of Community, Race, and the Arc of Policing in America, and I am just up to the point where he is taking the job of Chief of the New York City Transit Police, in early 1990.  This was when the system was still in crisis, but with the people and finances capable of achieving a turnaround.

Transit wunderkind David Gunn was the chief of the Subway system, and during the interview process he took Bratton on a tour of trains, stations, and other infrastructure.  It was a mess of graffiti, litter and other trash, homeless, urine, crime, etc.

The point Gunn made was that they could fix the trains and get them operating on time and safely.  But if the stations and system remained disorderly and chaotic, it wouldn't matter.

Broken Windows theory of policing.  That really set the stage for Bratton and the adoption of the "Broken Windows" approach to addressing and reducing crime.  It gave me a lot of insight into his thinking.

I am a strong proponent of Broken Windows theory, which I argue hasn't really truly been adopted by police departments.

The original theory, comparable to social urbanism, calls for a co-equal focus on improvements in policing -- how police time is used, more officers if possible, and the use of data on crime and types of crime to direct resources towards reducing crime not just responding to it, as well as investments to address disorderly conditions that contribute to community degradation, in urban design interventions focused on "crime prevention through community design," etc.

Zero Tolerance Policing is not the same as the Broken Windows approach.  Instead most police departments interpreted it as "zero tolerance policing," arresting people for the smallest of infractions.

And as crime rates dropped, ZTP not only had diminishing marginal returns, but led to reduced community support in the face of practices like "stop and frisk"  ("Crime dropped under stop-and-frisk, which is worth remembering in the rush to criticize it," NBC, Stop and Frisk: The Human Impact, Center for Constitutional Rights, "Here’s what you need to know about stop and frisk — and why the courts shut it down," Washington Post).

It also made "Broken Windows" a target for community activists and academics, since the theory was associated so closely with policing in New York City.

But having lived in a pretty bad area of DC for about 15 years, from the late 1980s to the early 2000s, I became a pretty strong proponent of the concept, having the "lived experience" of serious disorder and the many negative impacts from being victim of crime as a person and as a resident of a neighborhood ("The fine line between urban/center city chaos and order," 2020).


WMATA rail last year was the cleanest I can imagine. Already slipping but so much better than before.

Going to be a very long time before "choice riders" are comfortable on a bus.

Interurbans couldn't survive the widespread adoption of the car.

Transit over long distances isn't particularly efficient for individuals when it competes with the car for privacy and "first mile and last mile" and the airplane for speed.

But when you pretty much only had railroads and interurbans for longer distance, they were awesome.

Interestingly, as I watch Japan Railway Journal, they have this issue now with local service trains, which are somewhat comparable to interurbans -- not on the set up but in the function.

So a big focus they have is adding tourism to the train service, special trains, better trains, etc. Their economics must be different too in terms of operating trains.

Where Hechinger Mall is was the big yard and station for the Washington, Baltimore and Annapolis interurban.

The South Shore Line from Indiana to Chicago is the only extant interurban in the US. I'd like to ride it. It's got street running rail in a bunch of places.

2. WRT choice riders and "the bus" is why I say we should switch to double deck buses as a repositioning measure.

But yep, only people really driven by efficiency and objective reasoning will adopt bus use -- and that's only when it works like that.

But maybe that isn't even enough.

Eg the 62 bus from Takoma to Downtown during rush periods picked up a bunch of choice riders between Petworth and Downtown.

3. Last night's JRJ was a repeat of the episode on the Gono Line. One of the things they showed was how they added digital screens which would communicate information about area sites etc. as they passed.

The buses at Colonial Williamsburg include mentioning particular sites as part of the audio on the bus stops.

Imagine if the Downtown, Georgetown, Union Station, and National Mall Circulator buses did that.

The interurban article is a very nice sum up though.