Update: Montgomery County I-270 Corridor Transit Plan | Was: Washington Post letter to the editor on repair-related closure of Rockville and Shady Grove Stations and corridor management

The original entry, published on Monday October 11th, called for "corridor management" in Western Montgomery County, centered on I-270, the western leg of the Metrorail Red Line, the MARC Brunswick Line, and related major roads there.  In part it was an update of a series of pieces from 2016.

Unbeknownst to me, I guess after the debacle in 2016, and maybe in part because of my writings, the Montgomery County Planning Department embarked on the creation of a "corridor management" plan for that area, which has just been released, and which the Washington Post reported, "I-270 corridor needs bus lanes, Metro extension to improve transit, Montgomery planners say."

Bus rapid transit.  The big things recommended and most achievable in the near term are expanded bus rapid transit including the construction of the Corridor Cities Transitway, something that's been in planning for decades.

Railroad.  The plan recommends bi-directional service on the MARC Brunswick Line with mid-day frequency of one hour, and 15-minute headways in the morning and evenings and new stations at Shady Grove and White Flint (this was mentioned in my Purple Line series).

While this was recommended in an older MARC Plan, after the 2008 recession, this initiative has fallen by the wayside.  That MoCo makes it a part of their local master plan means it becomes harder for the State of Maryland to blow it off.

Although the recommendations don't call for integration between local transit and railroad service comparable to the London Overground ("One big idea: Getting MARC and Metrorail to integrate fares, stations, and marketing systems, using London Overground as an example"). 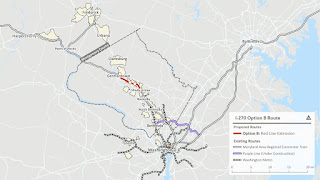 Metrorail extension to Germantown.  One thing the plan calls for that I didn't, is the extension of the Red Line to Germantown, adding two stations to Gaithersburg and a terminal station in Germantown.

The Red Line in this graphic shows the proposed extension of the western leg of the Metrorail in Montgomery County.

This is a big deal.  I didn't make such a suggestion because this series was more focused on intermediate term achievable changes, while a Red Line extension will take decades.

(FWIW, in 2006 in a presentation to the Action Committee for Transit, I suggested such an extension.)

Purple Line extension to Tysons.  It calls for more detailed study of a Purple Line extension westward from Bethesda to Tysons, which the car-focused Maryland Department of Transportation hasn't supported.  Again, by putting it the local master plan, it becomes less ignorable by the state. 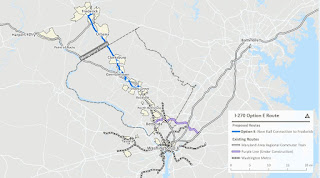 The proposed light rail connection from Frederick to Metrorail is shown as a blue line on this map.

Similarly, given the land use context which is less densely developed and populated, it doesn't make sense to extend Metrorail--heavy rail transit--from Germantown to Frederick.  Light rail could be a good compromise. 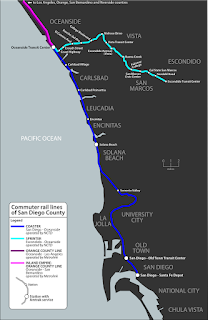 This graphic shows the multiple rail transit services in San Diego County, with Oceanside being a key hub.  Wikipedia image.

The light rail concept is not dissimilar from how North San Diego County has a rail line from the Oceanside railroad station.  Or light rail in New Jersey, in Hudson County across the river from New York City, and the River Line from Trenton to Camden, in the Philadelphia region.  But the recommended 6-minute headway is probably overkill.

Public comments and support are necessary to move these recommendations from ideas to implementation.  There will be public comment opportunities for this planning document, before it is forwarded to the Montgomery County Council for adoption.  People should review the plan and submit comments.

The Metrorail extension to Germantown, a proposed light rail link to Frederick, and extension of the Purple Line to Tysons all need a great deal of public support to move up to become actual priorities in the regional transportation capital improvements plan and budget.

Similarly, support of bi-directional service on the MARC Brunswick Line requires a great deal of public support for the State of Maryland to adopt this recommendation and add it to the regional transportation capital improvements plan also.

And making more general points about the need for corridor management involving DC and Frederick County, as well as Northern Virginia, for integration of MARC and the SmarTrip transit system, and for the consideration of cheaper pricing for MARC trips within Montgomery County

Recommendations from the Original Piece

2.  With great ride-matching/car pooling support, for both individuals and van pool programs like vRide.

5. Support long(er) distance bicycle commuting through focused initiatives, especially with e-bikes. (By this I mean maybe an e-bike means someone willing to ride 2 miles on a pedal bike would ride 5 miles with an e-bike.  Etc.)

6.  Expand MARC passenger rail service on the Brunswick Line, in both directions throughout the day.

7.  I also argue that a MARC Line could be built as part of I-270, continuing to Bethesda, Georgetown, and Arlington County, Virginia.

9.  Add an in-city station at Fort Totten as a way to provide extra-connection to the subway network outside of Union Station--Fort Totten is a transfer station for the Green and Yellow Lines, which would also provide redundancy to the network if Union Station were not operative for any reason.

11.  Develop more commuter bus solutions for the I-270 corridor.  For example, imagine if as part of the HOT Lane program ("County officials say Maryland governor made ‘empty’ threats to get toll lanes plan approved," Washington Post), an exclusive bus lane was also included. 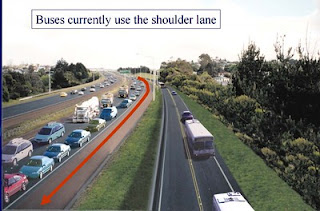 This should include cross-border services on Wisconsin and Connecticut Avenues between DC and Maryland.  Currently, Maryland DOT is resistant to funding cross-border bus services in these corridors, instead focusing on in-state exclusive services.

12. Make implementing the element of the Montgomery County bus rapid transit program targeting the I-270 corridor the top priority in the launch of the program. 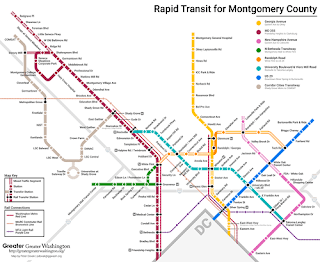 13.  Instead of calling for another freeway crossing between Maryland and Virginia (and maybe one is needed), begin planning for the extension of the Purple Line west to Tysons/Fairfax County in association with future necessary reconstruction of the American Legion Memorial Bridge. 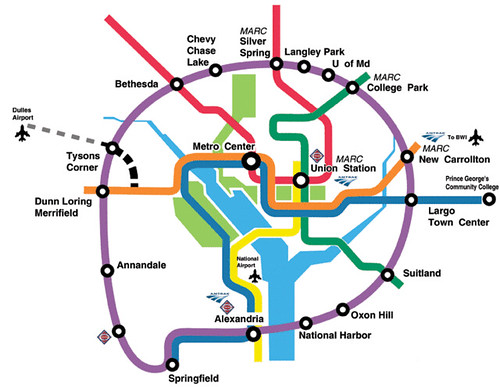 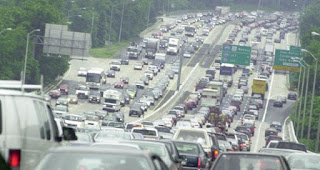 14.  Only with the commitment to planning for Purple Line extension west should the State of Maryland consider the pursuit of HOT lanes on I-270, which does improve congestion, but generates more SOV trips, not fewer.  Still, connecting such lanes to similar infrastructure in Virginia, especially the HOT lanes on I-495, makes sense.