Apparently the state of Utah is known as #1 in the nation for front yard holiday-related displays, which also extend to birthdays, school graduations, anniversaries, etc.
More Thanksgiving stuff:
1. "Franksgiving: When FDR moved Thanksgiving to boost the economy," Washington Post
Long before Black Friday shopping and Hallmark showing Christmas movies beginning in early October, stores and people didn't start promoting Christmas until after Thanksgiving.  Having Thanksgiving in early December shortened the now shopping season by one week.
2.  Apparently controversy over Thanksgiving goes back to the Civil War ("When People Thought the First Thanksgiving Was Too Woke," Politico).
Also see " 'I never taught the colonized version of Thanksgiving,' says former Utah teacher," Salt Lake Tribune.
3.  Thanksgiving is seen as a time for giving thanks ("Giving thanks for Thanksgiving itself," The Hill).  These days I am not particularly hopeful about the state of the country and its direction, especially in terms of the authoritarian bent of the Republican party.  The post-Census redistricting process will only strengthen minoritarian control of Congress and state legislatures. 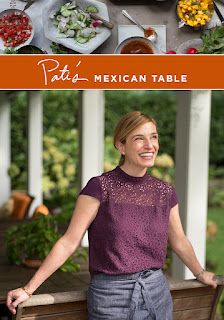 4.  Earlier this week I was watching an episode of "Pati's Mexican Table" on PBS.
She got her "food start" teaching at the Mexican Cultural Institute in DC, which led to the tv show, cookbooks, articles in the New York Times ("Forget the Wall: Pati Jinich Wants to Build a Culinary Bridge to Mexico") etc.
The episode was on thanksgiving, including her Yucatan flavored take on the Thanksgiving turkey, which looked totally awesome.  To get the smoked, grassy taste of the Yucatan, she covers it for many hours with banana leaves.  The leaves she used were in sheets.  I hope that one of the nearby Asian markets carries them, and we could try this next year?
Recently she did a two-part program, "La Frontera" on cooking and culture along the border of the US and Mexico (reiterating some of the points from this entry, "A solution to the immigration crisis on the Southern border, but it's too politically fraught"), which is still available online.  The program illustrates the interconnectedness of the "border lands," reiterating that the "walling the country off" doesn't work.

Back atcha. Hope all is well!


Thank you again for all your hard work and writings.

Once again I learn from you. All the more reason to try Pati Jinich's version it seems. (Besides Suzanne's smoked turkey on the grill last year, the best turkey I had was by the brother of our El Salvadoran next door neighbor. Although at one point, they were exiles in Mexico.)

Have missed your comments, which always extend my thinking!

Best to you and your family.

A Thanksgiving History Lesson in a Handful of Corn https://nyti.ms/3xdGtkK