State bicycle trail networks as an element of bicycle planning

For a long time, I've argued that bike-related tourism needs to be covered in bicycle master plans, at the city, county, and state scales.  Quebec's Route Verte is one of the models, a route system designed to promote bike-related tourism across the province, supported by a companion tourism development initiative. 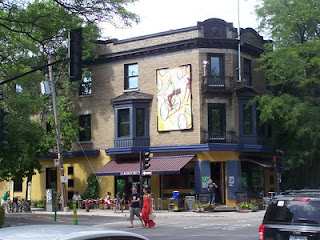 It's over 3,000 miles long and the VeloQuebec, the provincial bike advocacy organization, includes a travel agency focused on bike touring, located in its headquarters (and coffee shop) on a major Montreal separated bike path.

Amtrak now will transport bikes on the trains between DC and Pittsburgh, to accommodate trail tourists.

The New York Times recently wrote about New York's Empire State Trail  ("There’s a New 750-Mile Bicycle Route in New York. Take a Look"), which made me think about it. 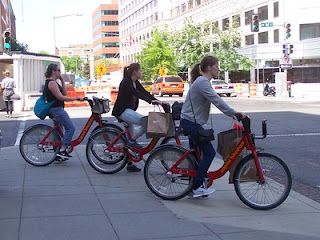 For cities, inspired by the Velo Quebec headquarters, and Arlington's "Commuter Stores" and commuter bike centers like in Santa Monica, LA's Union Station, and elsewhere ("LimeBike and "scooter lifestyle stores" as an example of forward marketing for sustainable mobility"), I've believed for a long time that cities should create mixed use "bike hubs." 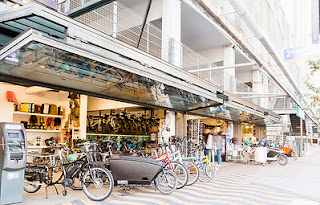 Bike Center Santa Monica is located a couple blocks from the beach and has a big bike rental business.  It operates a commuter center (parking and showers) and is located on the ground floor of a city parking structure, probably at reduced rent.  I've never seen a busier bicycle shop.

When we were bidding on bike share systems, our proposals included the suggestion that the "front end" of "back end" repair and operations center could be this kind of bike hub.  And as part of bike tourism, some towns in Iowa are creating similar kinds of bike hubs too ("Windsor Heights bike hub could have cafe, art, music," Des Moines Register).  From the article: 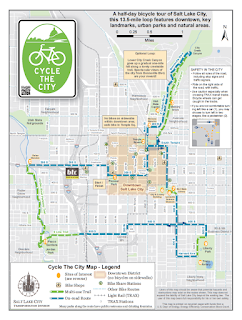 While plenty of cities publish bike maps, I haven't seen many examples of cities setting up routes for bicycle-based tourists as a way to explore a city.

Salt Lake is exceptional with its the Cycle the City route, signage, and brochure.

But it needs to make the brochure into signage too, comparable to the Alexandria Waterfront or Newcastle mobility wayfinding signage.

Ideally, state, multi-county, and county bike trails would be backbone infrastructure to which sub-county and city bicycle paths and trails would connect.

Subsidies for bike shops.  Separately but related, Will comments on the decline of bicycle shops in high cost commercial districts like Capitol Hill, DC.

On transportation demand management grounds, I've thought that bike shops ought to get a property tax break and/or rent subsidies.

Getting such subsidies, in return for support of bike commuting and bike tourism, could be a way of supporting bike shops.