At the end of the day, this is what anti-vaxxing is all about 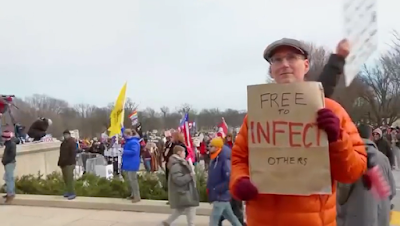 This is a screen grab from a Reuters video on Sunday's anti-vaccination protest in Washington, DC, on Sunday January 23, 2022 (video embedded within this article, "Anti-vaccine activists march in D.C. — a city that mandates coronavirus vaccination — to protest mandates," Washington Post).
I am unable to fathom how vaccination became a political issue and one of individual libertarianism.  Government's duty to protect the public health is one of the most basic functions of government.
I call the attitude of this protester "anarcholibertarianism" -- it joins anarchism, neoliberalism (pro market, anti government), and libertarianism not into a philosophy, but an attitude.
I hate to admit that recently I finally downloaded the Reddit app just so I could read r/HermanCainAward postings--people who filled their social media feeds with anti-vax, pro-conservative, anti-Democrat memes who then come down with covid and eventually die.
It's incredibly ironic to me that people believe they have "more control" from not being vaccinated, when in fact this makes them more vulnerable to sickness, health problems, and death.
For all the people who say -- "only 2% of people with covid die," what about the 25% of survivors who end up with long term medical conditions that they didn't have before, and the higher rate of death within one year of "recovery."
In "the old days" it was common for center city hospitals to have more than 1,000 patient beds.  Granted it's not in the center city, but the new PG Hospital in Largo -- the University of Maryland Medical Services Capital Region Medical Center -- has 205 beds.
No health planner would have ever believed that 30% of the population would willingly choose to not be vaccinated in the face of a major public health threat, leading to a severe capacity strain on the part of hospitals that have spent the past three decades getting smaller--downsizing--in terms of the total number of hospital beds and ICU capacity.
The only silver lining in the needless deaths are the culling effects ("U.S. Covid Deaths Get Even Redder," New York Times).
It's one of the few times when there are severe consequences for bad decision making and poor risk analysis and management.

It was a vax mandate, not anti vax. NBC4 went around chasing down attendants and the majority were vaccinated.

I've literally been in a nursing home every day for the past month. The disconnect between that and life outside is staggering.

There is a covid outbreak this week so residents are confined to rooms. The lady across the hall had a massive crying attack saying that this is worse than dying.

I'm personally not happy about getting a booster shot. Had a very negative cardiac reaction to my second shot; passed out at a bar while standing up. Turns out both my father and brother had similar reactions, which are continuing. My dad has had about 5 cardiac imagery tests to find something but nobody can pin it down.

Some places are now requiring booster shots to get in, so I understand some of the anger.

Also, remember the unvaccinated are not who you think they are. In DC it's blacks under 50, which is why Bowser dragged her feet on a vac passport rule.

In general, its the poorest and least educated segments of the population who don't have vaccines. Normally liberal/progressive people claim sympathy for those but true colors are hard to hide.

I think I mentioned that a friend in the Bush WH was the one who had to write the pandemic response book. He's now is charge of of the vaccines development at a major pharma. he was responsible for putting the NPI into government talk, which was a joke.

One major problem is the largely theatrical and ineffective NPIs from 2020 spoiled the water for the only effective solution -- vaccines. OF course the only other tool which really works is shut down all international entry was never on the table.

What people forget about the mandates is that their only value is as a "nudge"; there is minimal value in the actual mandate. In the recent Supreme Court case I think the estate was that a mandate would save 10,000 people. Easy to forgot that vaccinating people under 50 doesn't do much, and the only real target should be people over 60.

Something like 40% of all recent admissions were unvcccinated patients from 60 to 69. Next group to 70 to 79 and then finally 50 to 59. Every other group was minimal. What we need are nudges to get that group (60 to 69) vaccinated.

and this is what I meant to send:

(off topic, see comments on tent cities at the end)

Feel free to ignore my vax drivel, no need to fight on that!

I don't see how that estimate of 10,000 avoided deaths from mandate is accurate. Tens of thousands of people are dying per month, more than 90% are unvaccinated.

Yes, I understand the issue of symptoms from the shot. I've been pretty fortunate. Suzanne had issues for a few days after both the second and third shots.

and about empathy for the uneducated. But the unnecessary deaths make me a lot less empathetic. How difficult is it to weigh the decision of possible death or long term medical conditions versus way less risk of that?

I shouldn't but I've started to read r/HermanCainAward. It definitely suppresses my empathy.

2. WRT nursing homes, my heart goes out to you. When Jim had to do rehab, we did it at Stoddard in Mount Pleasant. They are great. I was impressed. But most of the people there permanently are warehoused.

If Jim were put in a home, it'd kill him. He's lost most of his congnizance, but when he was at rehab, he felt he was being abandoned. It made him agitated. He would walk around at night, etc.

Although, now in the last week, he's shifted to in-house hospice. The standard prognosis is six months, but his physical health is quite good, so I think he'll still be around for some time. It's his mind, eg he can't follow commands, and his brain doesn't tell his body what to do (like walk, swallow, hold a fork etc.).

Until the last year or two, I had no idea that drug overdose deaths are so high. Many x greater than murders.

Great piece. I'll have to track down the book.

And yes, the potential insights about encampments are really important. But how to deal with it, I don't know.

there was another point on drug legalization, I can't find the cite, but the basic message was that "addiction" was something that only happened to the socially-unmoored. Basic opiod use is very nice but if you've got a reason to get back to the real world you can do so. If the real world is not that great, you end up addicted. Can't find the link/cite but wanted to footnote it here in case I pop in with in a month.

I do think fentanyl might change that equation but suggestions, for instance, the Sackler may not be as evil as people say.

The point the recent author made is fentanyl makes you so paranoid that group shelter is not an option and you'd rather be in your own tent.

I'm sorry other hear about hospice. Again not fun stuff.