M. Nolan Gray is a writer and PhD student in planning at UCLA.  He has a piece in the Atlantic, "Noisy and Unsafe: Stop Fetishizing Old Homes," with the subhead "Whatever your aesthetic preferences, new construction is better on nearly every conceivable measure," criticizing "old housing."

It's not an anti-preservation piece per se, but he argues that new construction is better than old construction.  The impetus for the article is that his 1958 apartment building in Los Angeles is noisy.

I'd say, based on my experiences in "new" housing, that is, houses and multiunit buildings constructed  after1960, and houses built before 1930, he isn't correct.  Most older buildings were constructed to last, weren't constructed primarily out of a desire to minimize cost. 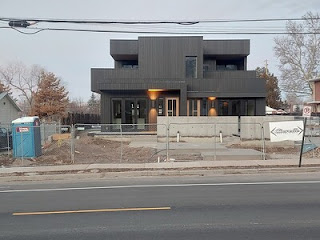 This weird looking house has been under construction for a couple years now.  It's on 2100 East in Salt Lake City.
Plus, so much of new housing, either single family housing or multiunit, is ugly.

Poor construction is a problem of the ages, today and in the past, and yes many places are inadequately insulated, which is an element of noise suppression.  But for many types of building materials, in particular wood (lumber), fixtures, and appliances, older is better--wrt appliances, analog often works better and definitely can last decades longer ("How Long Do Appliances and Parts of Your Home Last?," This Old House). 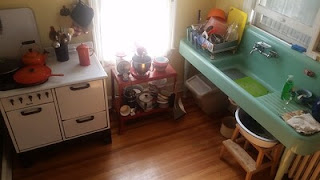 New materials aren't designed to last.  Our 1929 house still has functioning fixtures from when it was built (kitchen sink and bathtub), and windows.  The 1960s Kenmore washer and dryer were still functioning when we had to move.  (The tenants broke the washer.  Had we still lived there, it probably would still be in service.  The washer had original fill hoses for more than 50 years.)

The oven lasted about 80 years, but the hinges broke and repair was expensive (so we kept the oven to fix in the future and got a new one).

The windows that were replaced by the previous owner sometime in the last 20+ years are all failing.  The 90+ year old windows for the most part are fine (or have been fixed so they can last another 90 years). 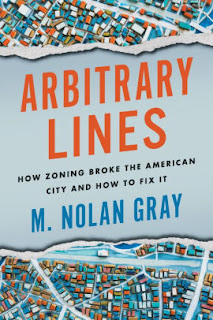 M. Nolan Gray is a "market urbanist"-- that is someone who supports cities but favors "the market" over urban or "government" planning, has authored at least one book on zoning as the scourge of the city.

Granted zoning has many problems, but people are too quick to blame "government" for the problems, when many of those problems were created by private sector influence on government policy, the reality of how "the market" works for property, especially housing, and resident opposition to change of any kind("not in my backyard" or nimbyism) .

The problems are heightened by a different kind of planning failure, but one that nimbyism refuses to acknowledge, that today's population is significantly higher than it was when most zoning codes were developed in the 1950s, and is higher than when most traditional cities were built out, so there isn't nearly enough extant housing relative to today's demand.

Those problems are accentuated by the fact that today almost 50% of US households are one person, further increasing demand relative to earlier periods.

The zoning problem is a dependent variable.  The independent variable is the failure to acknowledge and address that population increases need to be met with more housing supply, along with the simultaneous failure to adequately provide funding for housing for the segment of the housing market that can't afford market-rate housing.

-- "Understanding the DC housing market: demand for urban living, not the construction of new housing, is the driving force," 2021

I am not super "math-y," but the recent exponential frothiness in the housing market has to do with reaching a kind of tipping point in many markets, when the amount of vacant housing relative to supply is minimal, less than 5%.

Besides the fact that today's housing is built at today's costs for land, labor and materials, so additions to supply today only lead to price slackening over multi-decade periods of time, as long as demand remains greater than supply even with new additions to supply, prices won't drop.

what a great sink.

The japanese/asian example is interesting. Of course there is a cultural element; it's considered very bad form live in a house where someone died.


But his argument is disingenuous. Again going to back to that chart tokyo at a PI ratio of 13. I don't se other Japanese cities, but another site:

Gives them at around 9.

Again as much as Americans bitch about housing prices it's actually very cheap here. Imagine living in the US where the PI ration is around 9 (San Francisco or Arlington, VA).

Yes, that PI data us instructive.

I liked the oven too... but I will say the new one was much better insulated.

We lucked out in SLC. About 8 months before the market really began to skyrocket, and the house was poorly marketed, so it was bought for a reasonable price (in what turns out to be one of the wealthier--not us--city zip codes, because of the nearby really expensive homes in the foothills).