One year when I was still in Ann Arbor, I ran for City Council in a Ward that at the time was still traditionally Republican because the guy who normally ran wasn't interested in doing so that particular year and there wasn't anyone else.

When I worked at the Center for Science in the Public Interest, it turned out that the person running the Americans for Safe Food project had, years before, run for Congress in Iowa.  He lost, but made the point that his campaign helped lay the groundwork for the subsequent election of Tom Harkin.

Anyway, we were sitting at the lunch table one day, maybe in 1990, talking about DC, and with the difficulties so serious, we wondered why anyone would run to be the mayor.

And then, I didn't even know about the urban sociology theory of the Growth Machine.

New York Magazine has an article about Keisha Lance Bottoms, the black woman who until recently had been Mayor of Atlanta, with seemingly endless possibilities in state and national politics.

Instead she chose not to run for reelection as she crashed and burned over rising crime in Atlanta--to the point where the city's most exclusive area, Buckhead, a large driver of property tax revenue, is agitating to secede from Atlanta and create its own city ("Buckhead's proposed secession from Atlanta goes under the microscope," Axios), a number of police killings, covid, the George Floyd killing and how it drove local progressive politics, and the difficulty of being the Democratic mayor in the state's largest city, when state politics are dominated by Republicans.

... Her time in office seemed to have sobered her; the magical transcendence that marked her inauguration had given way to a recognition that a lot would go unfinished. “I’m not God,” she said. “In the same way the groundwork for so many things was laid by previous mayors, I’m laying the groundwork for mayors to come as well.”

Whether her successor builds on that legacy remains to be seen. But the deeper question about Bottoms’s tenure haunts other American cities, too, especially after George Floyd — whether the demands of being a Black mayor are at odds with making those cities work for all Black people. 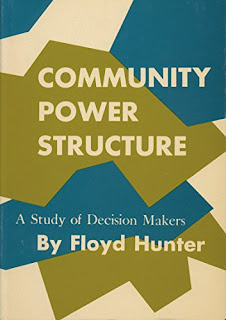 Interestingly, the political science theory of the urban regime was first explicated in an analysis of Atlanta ("Atlanta: Floyd Hunter Was Right," Who Rules America; "DC Growth Machine Update," 2010.)

From the New York Magazine article:

... “An established, as well as rising, Black middle class could only benefit from a city in which the racial priorities but not the class priorities had changed,” writes historian Ronald H. Bayor. As Andrew Young, the city’s second Black mayor, once remarked, “Politics doesn’t control the world; money does. And we ought not to be upset about that.” To this day, Atlanta’s Black working class and poor are routinely left behind — their neighborhoods bisected, left to deteriorate in the shadow of new sports stadiums; their economic needs deprioritized in new business ventures welcomed by the city government.

Black mayors are tasked with managing this order on the tacit condition they don’t change it. You get the sense that many, from Jackson to Bottoms, are driven by the apprehension that boom times are fragile — that this experiment in Black rule, for all its successes, could just as easily fall apart and vindicate the racists. Atlanta’s economic momentum is already under threat from its mostly white Northside. The local cityhood movement, in which mainly rich communities in Georgia break off to form small cities, has recently enticed Buckhead, Atlanta’s wealthiest district. The big reason its leaders have given for wanting to secede is crime. And the easiest way for mayors to perform seriousness on the matter is to throw money at cops, to greet Black suffering with nightsticks and gun barrels. 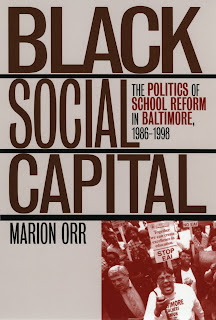 This reminds me, albeit a little differently, about a point made by Marion Orr in Black Social Capital: The Politics of School Reform in Baltimore, 1986-1999, how African Americans achieved "control" of municipal institutions in big cities but only after their heyday had passed, and in a time of reduced economic circumstances, making it almost impossible to achieve the big aspirations that seemingly having control unleashed.

In Baltimore, the city had long since been outspanned by the suburbs.  By contrast, Atlanta is growing, albeit marked by poverty with a strong Downtown core and a number of large corporations are headquartered there, with firms continuing to relocate there (for example Mercedes Benz, a large State Farm facility, etc.).

In Atlanta, the contract between the largely white economic elite and the black political elite ensured that political control remained  subservient to the interests of property and capital, that neighborhood and black economic and social improvement would always take a back seat.

But the funding is paltry, less than $35 million over 5 years, drawn from proffers from a development agreement ("Atlanta City Council authorizes agreement for mayor's One Atlanta initiative," Newsbreak).  Coordinated through a newly created Mayor’s Office of Equity, Diversity and Inclusion, the initiative aims to provide:

[and is charged with] ensuring more equitable access to economic and workforce development opportunities across the city and developing equity champions across citywide departments.

Separately, the Atlanta Beltline initiative has been underway for almost two decades.  It's a smart growth project leveraging the once extant circumferential rail line.

MARTA, the metropolitan subway system, has been developing new expansion plans and some of the previously resistant suburban counties, facing serious transportation difficulties, are more open to adding public transit to the mix.

A number of businesses have decamped for the suburbs, including the Atlanta Journal Constitution newspaper and the Atlanta Braves--counter to trends in other center cities.

I'd say that in legacy cities in the Midwest and Northeast, many corporations are relocating back to the center city from the suburbs.  But in the growing sprawling places in the South and West, there is still the strong trend of suburbanization of commerce.

--  "Could bringing premier regionally headquartered business enterprises to the Pennsylvania Avenue Corridor be key to its renewal and revitalization?," 2014
-- "A lesson that seeing is believing: Panasonic's new building in Newark, NJ as an example, positive and negative, in businesses coming back to the city center," 2015
-- "Corporate headquarters relocating to the center city: GE chooses Boston," 2016**

** Note that GE's subsequent crash and burn ended up making the relocation not particularly lucrative for the City of Boston ("GE breakup creates uncertainty around Boston HQ," Boston Business Journal).  There are only 200 employees at the Boston headquarters, while there were 800 employees at the GE campus in Stamford, Connecticut.