Planning and maintaining bicycle and pedestrian infrastructure over the long term 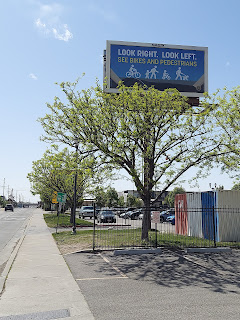 One of the things I've learned over the years is that many governments are a lot less interested in taking on new long term ownership of public assets that will result in cost increases for maintenance.

While in the "old days," long term responsibility for new ongoing expenses, or the need for significant and expensive repair as the asset's useful life declined, wasn't part of the consideration process for taking on new properties, sites, and projects.

For example, DC gave land to the National Park Service rather than create its own Georgetown Waterfront Park, and new parks in the Capital Riverfront District and in the McMillan Reservoir development are privately developed and operated.  (By contrast, cities like Philadelphia and Salt Lake prefer to build and own their parks.  But Salt Lake County is opening up a new park that is a hybrid.)

And there tends to be a failure to provide systematic reporting and addressing of maintenance problems.

In any case, I know that now serving on the board of the Sugar House Park, I do bring up the need for newly donated memorials etc. to come with a commitment for financing future maintenance. 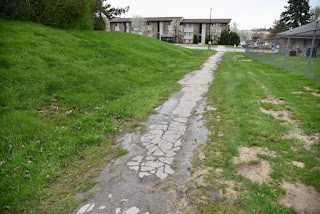 The asphalt path that runs between Runnymede and Pauline boulevards in Ann Arbor's Dicken neighborhood on May 6, 2022.  Photo: Ryan Stanton, Ann Arbor News.

1.  There was a report in the Ann Arbor News about the need to update an almost 50 year old public path provided at the initial construction of a condominium development ("This crumbling Ann Arbor path may be the worst, but who should pay to fix it?").

But the cost to rehab the facility to today's standards is estimated at $500,000.  An easement was never recorded giving the path to the city.  And the development has only 53 units, meaning each would have to come up with a special assessment of $10,000 to cover the costs.

A Councilmember proposed that the city step in, but that would absorb all the funds in this year's trail maintenance program.

2.  A trailhead in Los Angeles County was never properly conveyed to the City of Pacific Palisades or County, keeps getting sold at tax auctions, is poorly maintained or closed to the public, etc., and the original owner just got a big fine ("L.A. hikers love Temescal Canyon. A developer just got fined $6 million for blocking it," Los Angeles Times).  From the article:

According to Coastal Commission staff members, the facility’s troubled history began in the 1970s, when Headland Properties sought permission to build 2,000-plus homes in the undisturbed wilderness beside Topanga State Park.

At the time, coastal authorities required the developer to preserve thousands of acres of land for open space. They also ordered them to create and maintain a trailhead facility for public access to Temescal Canyon trails, with the requirement they would eventually transfer the facility to the city or a nonprofit approved by the coastal commission.

In 1995, the city agreed to take the parking lot and restrooms, but a smudged notary stamp got in the way. The county recorder’s office deemed it illegible and did not record the transfer. Although Headland was notified of the stamp issue, it stopped paying property taxes and handed the trailhead keys to the city, which began maintaining the facilities for public use. 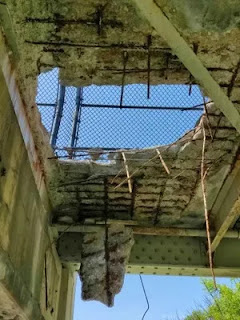 3.  Not exactly the same, but a guy fell through a pedestrian bridge over a freeway in Detroit, and the Detroit Greenways Coalition claims they reported it ("State was told of problems before man fell through Detroit bridge, nonprofit says," Detroit News, registration required).  From the article:

The Spruce Street pedestrian bridge that Detroit attorney Ely Hydes told The Detroit News he fell through toward the Lodge Freeway was the subject of at least one previous complaint about structural problems, according to the Detroit Greenways Coalition, a nonprofit that pushes for better hiking and biking pathways in the city.

Detroit attorney Ely Hydes told The Detroit News the concrete on the Spruce Street pedestrian bridge over the Lodge Freeway in Corktown collapsed under him on May 9 and he fell about 15 feet toward the Lodge Freeway, just feet from traffic.

But a spokeswoman for the Michigan Department of Transportation, which is responsible for the state's freeway pedestrian bridges, said Monday she wasn't aware of any previous issues with the span in Detroit.

Todd Scott, director of the Detroit Greenways Coalition, said his group has filed multiple complaints with MDOT about the condition of Detroit's pedestrian bridges, including the Spruce Street bridge. "We've been complaining about that bridge and other pedestrian bridges in Detroit for a long time," Scott said.

Other examples.  I wrote about a similar situation in Seattle, where a guy died because there was inadequate signage about the trail ending in a stairway ("City warned of stair hazard before bicyclist died," Seattle Post-Intelligencer).  It was reported, but to an individual's voice mail, and it's not clear the recipient ever heard the message.

A similar accident happened in Chicago, although the woman didn't die, but is paralyzed ("Woman sues over accident on bike path that left her paralyzed," Chicago Tribune).  Although she lost her lawsuit.

And analogously about a deadly fire in DC ("Unresolved versus Closed as a determination in handing City inspection/service matters," 2019) which resulted from problems in how DC reports and resolves code issues.  DC can close a code enforcement issue without resolving it. 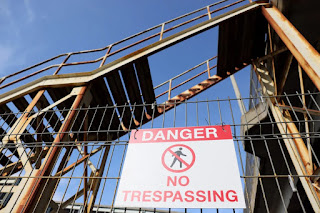 A gap where steps are missing is seen on a staircse leading to the JFK/UMass T station where a man fell to his death. Photo: Jessica Rinaldi/Globe Staff

Boston had a problem too with the failure of a stairway at a train station, leading to a death ("BU professor dies after falling through staircase across from JFK/UMass MBTA station," Boston Globe).

Bridges.  In some cities, railroad companies are trying to rid themselves of the responsibility of maintaining public bridges that cross tracks ("A bridge too far: Philadelphia and CSX collide over railroad’s request to demolish an aging bridge," Philadelphia Inquirer).

And other cities are selling or leasing bridges and letting them be tolled, because they can't afford repairs ("Bay City Bridge Partners clarifies rumors regarding tolling timeline," MLive). 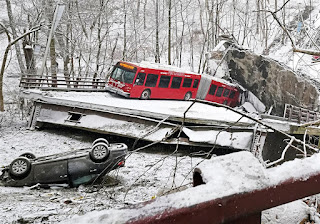 Reporting and resolving problems.  One of the problems with ad hoc reporting--you call person X, because you know them--is that the problem needs to be reported to a system where it is recorded and tracked.

Although it's not clear usually what is transpiring once a problem has been reported, and too often the tracking system doesn't provide for public reporting of pending matters.

In the "Unresolved" blog entry I made five recommendations:

1. More information should be provided to the reportee about the disposition of a matter reported to the city.

2. The city should change the language marking performance of service calls from "CLOSED" to either "RESOLVED" or "UNRESOLVED."

3. A process should be developed to further investigate and address matters that remain unresolved in normal response processes.

4. Evaluate workflow processes on an ongoing basis, changing them as necessary, with the aim of continuous process improvement.

But there needs to be an additional recommendation. I remember years ago the Baltimore Sun reporting problems and then reporting on the lack of follow up.  Similarly, the Toronto Star has a column, "The Fixer," where people comment on similar kinds of problems.

6.  Keep a running tally of reported and open items that is a public document, properly organized and codified, so that people can search by type of problem, council district, street, neighborhood, etc.  These entries should include a reasonable amount of information about the problem and what happened.