The Seattle Times has a story ("Seattle residents painted their own crosswalk. It didn’t go over well") about how an unidentified group of citizens painted a guerilla crosswalk at a location where they've called for one for years, and where one is supposed to be constructed but still hasn't.  This week, the crosswalk was removed.

Although it was pointed out that "illegal" crosswalks can be problematic.  From the article:

But Fellows, who works in transportation and supports putting a crosswalk at the intersection, had concerns that this one may create safety issues. “The paint isn’t reflective, there’s no stop signs, there’s no notice to drivers that things are going to be different there,” he said.

There were likely liability concerns as well, he said. “If you’re a traffic person, you spend half your life in tort claim court.”

The life span of the crosswalk was roughly eight months. Bergerson with SDOT said it didn’t meet the department’s standards but said the installation of traffic signals should begin this year. “We’re working to get the word out to the public,” he said. It won’t arrive tomorrow, he added. “It just takes some time.”

Baum said he wouldn’t have minded its removal if it had been immediately paired with a specific plan for it replacement. Absent that, “even though it’s this sneaky tactical thing, I think taking away something that people feel is an asset to the community is going to rub some people the wrong way,” he said. 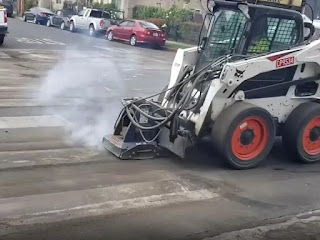 I came across a similar article about Los Angeles ("LA removes crosswalks allegedly painted by a secretive group," NPR) and how the city is removing crosswalks created in guerilla events by an organization called Crosswalk Collective LA.

And a couple weeks ago, there was an op-ed in the Washington Post by the Fairfax County (Virginia) Council Chairman, Jeff McKay, saying that people shouldn't protest at the houses of elected and appointed officials, like Supreme Court Justices aiming to overturn Roe v. Wade ("Political change doesn’t happen outside people’s homes"). 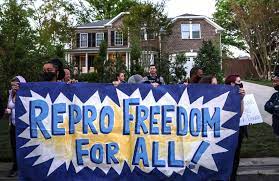 Demonstrators in support of reproductive rights hold a vigil May 9 outside Supreme Court Justice Samuel A. Alito Jr.'s home in Alexandria. (Evelyn Hockstein/Reuters)
Two of the elements of the First Amendment to the Constitution of the United States are:

the right of the people peaceably to assemble, and to petition the Government for a redress of grievances.

Although I joke that a change.org petition isn't enough, and that people don't think through what particular units of government are empowered to do, or not, and they often mis-direct such petitions and protests.
Listening/Not Listening: What do you do when your voice is ignored?  I joke that when my wife complains that "you don't listen!" I say "I do listen.  I just don't do what you say."
And I make the point in DC grassroots politics a lot of the time when people say "Government/you aren't listening to us", the reality is that "they are listened to, but the government doesn't act on their complaints, because they testify about matters outside the bounds of the enabling ordinances and regulations guiding decision making on the matter.
But when I saw the piece by McKay, the first thing I thought was that people are "emboldened" to take such drastic measures as protesting outside of the house of a Supreme Court Justice when they believe that they have no other choice, that there are no other reasonable means to communicate their concerns.
Not unlike the scene from the movie "Network", where people are encouraged to lean out their windows and yell "I'm mad as hell, and I'm not going to take this anymore."
It's definitely true with the Supreme Court, between the process by which Justices have been appointed by a minoritarian Senate, and how citizens have zero mechanisms for communicating to and with the Court.
And it's true to an extent that citizens fed up with the seeming lack of action on installing important safety measures in their neighborhoods, like crosswalks, take action out of a sense of frustration and a belief that the city will do nothing or take years and years to do so.
Indicators of the need to change.  In both cases, such acts need to be seen as indicators for action.  That protest outside a house ought to make the person think somewhat about what they're doing and how they might be incredibly isolated and disconnected from the majority of citizens.
The point isn't to criticize the protestors as much as it is to understand why they're protesting (although the public nuisance and personal safety issues that arise do make me see why some people think that such protests are unreasonable).
And seeing citizens paint crosswalks ought to get city transportation agencies more focused on "speedy project delivery" and delivering safety improvements that matter, especially to communities that have ongoing issues with traffic speed, crashes, pedestrian and bicycle deaths, etc.
There was an article in my feed today from Dezeen, "Sensible proposals that are not adopted indicate a failure of design thinking" says commenter," and just responding to the title, is it "the design method" or what or a broader "Democratic Dysfunction."
That government is no longer focused on acting to solve problems, but to prevent action altogether.
But also that there are many elements within law and regulation that operate at cross-purposes.
Related is George Monbiot's concept of the "Pollution Paradox" which posits that the organizations doing "the bad things" are the most motivated to fight changes in policy and regulation that would limit their ability to continue to pollute.
National Environmental Policy Act and reviews and project delays.  There is also environmental review.  It is well intentioned, but can delay projects for years, and is often used as a way to sidetrack projects by opponents.  Somehow there needs to be a balance between environmental review and action.
For example, a review of dog issues for the Golden National Recreation Area in the SF Bay is over 1,200 pages--for dogs. 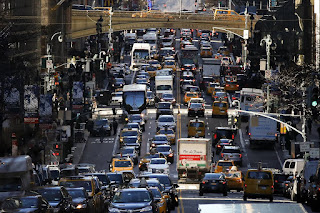 Traffic moves on 42nd St. in Midtown Manhattan. (Drew Angerer/Getty Images)
A current example is how the NY MTA has to answer 430 questions from the Federal Highway Administration before it can proceed to the next stage of review for their proposal for congestion pricing in Manhattan ("More delays for NYC congestion pricing as MTA struggles to answer questions from feds," New York Daily News).
In my experience, many times projects are reduced in scope to avoid triggering environmental review, so they won't be delayed, but at the cost of doing a better project.

"I defend the First Amendment, but don't protest outside the Supreme Court justices' homes"

- is it first amendment or intimidation? crowds can become violent.

- what if protests were outside of liberal justices' homes?