200th anniversary of the birth of Frederick Law Olmstead, a premier figure in the US parks movement

-- "In Photos: A walk through Frederick Law Olmsted's Enduring Gift"

Central Park was created before the first National Park, and it was used as an example.  While the idea for a "central park" was not Olmstead's, the way he and Calvert Vaux executed it, and their subsequent work in other communities across the country shaped the way parks have been developed in the US ever since. 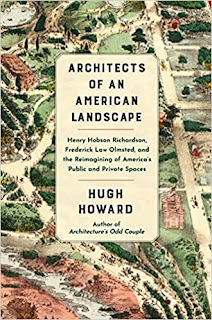 I have a couple books from the library that I need to finish:

-- The Power of Scenery: Frederick Law Olmsted and the Origin of National Parks ("How did our national parks come to be? A new book explores their rocky start," Washington Post).

Plus, one I'd consider related but not about Olmstead at all, Learning from Bryant Park, which is excellent and very practical.

Separately, the great urban design writer for the Philadelphia Inquirer, Inga Saffron, criticizes ("By turning Fairmount Water Works into a party space, Philly exemplifies the worst of park privatization") the stealth privatization of parks in Philadelphia, where an underfunded system has allowed the development of a private event space to obscure some of the original water works at Fairmount Park, which is one of the first examples of integrating park functions into the development of water supplies and reservoirs.

She mentions a great documentary by PBS affiliated WTTW of Chicago, "Ten Parks that Changed America." (Plus there is the Ken Burns PBS documentary series on the National Parks.)

I do understand the tension in parks funding between cities and counties that are constantly reducing budgets, while often adding parks further increasing financial demands, and generating revenue to support them.

(Salt Lake City has just updated its parks master plan, and there are some particularly good elements, although I think it could have gone farther.)

(Separately, as comments on various Salt Lake County planning processes, I've just written a paper on creating a recreational transit district for serving the County's recreational assets, particularly in the canyons on the Wasatch Front, but also for the whole county and the Oquirrh Mountains on the west side, although there is comparatively limited access to potential recreational assets in the Oquirrhs.)

Ironically I was at a conference a number of years ago, where Philadelphia parks officials were adamant about running their own parks, not devolving them to separate nonprofits.  According to Saffron, that's changed.  From the article:

What’s going on at the Water Works represents the most extreme example of the Faustian bargain Philadelphia made two decades ago when it began actively privatizing its public spaces. Because the city was unable — or, more accurately, unwilling — to fund its parks properly, it began outsourcing choice locations to non-profit operators. It’s the reason that Dilworth Park, Franklin Square and parts of Cobbs Creek all have private managers today. Those operators are expected to maintain the grounds and provide public amenities. But since managing a park is expensive, they were given a carte-blanche to close their parks for money-making events.

The problem with this model, as I’ve written in the past, is that the closures occur far too often, and the public has too little say in the decision-making. But I’ll grant the private manager at Dilworth and Franklin Square this much: They’ve used the revenue from all those fundraisers to transform previously unloved parks into great spaces that all Philadelphians can enjoy.

2.  The Inquirer also ran a story on the City Parks Alliance meeting in the city ("Philly parks draw visitors from 6 countries during international conference").  I'm going to have to look into getting "my" Sugar House Park to join CPA--I joined the board in April.

3.  And WHYY, the Philadelphia PBS affiliate, has a story on a parks planning effort there, "Philly officials want you to reimagine the Ben Franklin Parkway."

It'll be one planning effort I intend to reference as part of the development of a new master plan for Sugar House Park.

4.  Finally, a number of months ago, the Philadelphia Inquirer had a great article on "green bonds" as an element of the funding for the rehabilitation of Longwood Gardens ("Longwood Gardens’ $250 million renovation taps increasingly popular ‘green’ bonds").

I missed this article in the NYT, about Liberty State Park, which is on the waterfront in Hudson County. A goodly amount of the park is yet to be "developed," partly because it requires remediation.

There is lots of tension about how to develop it, many proposals that involve for profit activities, including carving a bit away for use by an abutting golf course.

With just weeks to go before the state budget deadline, a powerful assortment of New Jersey politicians introduced an expansive new bill tied to an explosive old controversy.

The bill offers $250 million for park upgrades to Liberty State Park, a popular 1,200-acre recreation destination with spectacular views of New York Harbor and Lower Manhattan. But it also opens the door for the addition of amenities that generate revenue to pay for park maintenance, and for the creation of partnerships with private donors.

The move has ignited a long-simmering fight over the future of the parkland in Jersey City, pitting private interests — most notably the owner of a nearby private golf club — against proponents of a free and open park. ...

The new legislation was introduced last week and fast-tracked for a committee hearing on Thursday. It does not lay out specific plans for new development projects. Rather, it would allow a 17-member task force to prepare recommendations for the park’s future — a prospect that proponents and opponents alike say could mean a drastic reimagining of one of the state’s most popular parks.

The push to develop the park is being supported by Paul Fireman, the owner of Liberty National Golf Club, an elite private golf course along the bay southwest of the park. ...

The day after the bill was introduced on June 6, a glossy brochure in support of it began appearing at homes throughout Hudson County. It was mailed by a group formed in the last several years, Liberty State Park for All, led by Arnold Stovell, who has been paid by Mr. Fireman for the work he has done for the group.

Written in English and Spanish, it included drawings of an alternate park plan, complete with a 7,000-seat concert arena, large community center and swimming pool, 5,000-seat stadium and rows of athletic fields and courts. ...

Bob Hurley, a lifelong Jersey City resident and Hall of Fame high school basketball coach, is the paid president of a new group called the People’s Park Foundation, a nonprofit partially funded by Mr. Fireman. Mr. Hurley, who has known Mr. Fireman since he ran Reebok, said he exercises daily in the park and believes it could be better utilized.

The park, which opened in 1976, has a science center, two high-end restaurants, a yacht club and a memorial to the Sept. 11 terror attacks, “Empty Sky.” Its riverfront walkway is almost always filled with anglers, runners and tourists. Crowds of families picnic and barbecue on warm weekends. (Over Memorial Day weekend, a sign flashed on the New Jersey Turnpike warning drivers that the park was filled to capacity.) ...

Mr. Murphy, however, made no reference to an effort begun in October 2020 by a state agency he controls, the Department of Environmental Protection, to upgrade the park entirely with public funds.

The agency conducted detailed neighborhood surveys and held five public meetings to finalize cleanup and construction plans for the park’s fenced-off 235-acre interior and 11 nearby acres.

A draft redesign called for almost five miles of forested hiking and biking trails, 61 acres of new ball fields and athletic courts and vast stretches of flood-friendly wetlands, which would be formed by digging a tidal channel from the interior of the park to the river. Funding had already been set aside — much of it from fines paid by polluters, state officials have said.

A task force had been expected to submit a report to the D.E.P. commissioner for final approval by June 30.

The new legislation would, at a minimum, complicate the two-year effort.

"He’s Still Fighting Developers for the Park His Father Founded"