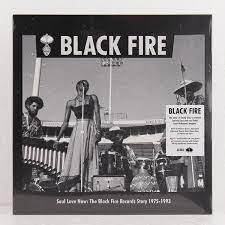 The Washington Post reports ("Home Rule Music Festival keeps the spirit of Black Fire Records alive") on a music festival to be held tomorrow at the Parks at Walter Reed, the redeveloping former site of the big Army hospital, which is on Georgia Avenue, a half mile or so from the Takoma Metrorail Station (also on the 70s Georgia Avenue bus lines).  From the article:

In the 1970s, Washington-based Black Fire Records was simultaneously an incubator and reliquary of D.C.’s African American music and culture and a living symbol of the Black Power and Black Consciousness movements. Charvis Campbell wanted to celebrate it.

“We had to do something in the spirit of Black Fire,” said Campbell, owner of Petworth’s HR Records and head of its adjacent nonprofit, the Home Rule Music and Film Preservation Foundation. To start, he invited Richmond-based saxophonist James “Plunky” Branch — who co-founded Black Fire with local jazz DJ Jimmy “Black Fire” Gray (who died in 1999) and led a jazz band called the Oneness of Juju for the label — to perform in D.C. in 2021.

“I was so enamored with this guy,” Campbell recalled. “The stories he told, the music — he just had it all. And on the way out, I talked to Plunky, and I was like, ‘We got to do a documentary. Any way I can help?’ He said, ‘Sure, let’s talk about it.’”

The story is interesting for at least three reasons:

1.  It's about a 1970s era music label, based in DC and focused on recording and distributing area music.  They were focused on Black Power and DC Home Rule issues among others.

2.  They've developed a documentary about the label, and (1) and (2) are interesting from the standpoint of cultural plans including elements on documenting relevant local cultural history, including music.

-- "More on cultural planning and community history documentation elements," 2018
-- "Culture planning and radio: local music, local content vs. delivery nodes for a national network," 2019
-- "NBC4 asks if DC can become a concert capital like Nashville, Austin, and New Orleans?," 2019
-- "Leveraging music as cultural heritage for economic development: part two, popular music," 2017
-- ""Turn it down" doesn't mean "turn it off": It's not always about race--the issue of (go go) music broadcasted at 7th and U Streets NW," 2019
-- "Local music used to define communities: today with radio chains and national music distribution systems, not so much," 2021

This New York Times article on Black Fire Records, "The Small, Black-Owned Record Label That Made a Big Impact in 1970s D.C.," is a great example of the kind of documentation I'm thinking about.

3.  It's a free concert, on the Walter Reed site, and afterwards they will show the documentary, The Black Fire Documentary.

I'm not particularly interested in that particular type of music, but the history is interesting, and if we still lived in Manor Park, it'd be about 1.5 miles away, and easy to get to.

Extremely interesting wish I had seen this before now I woulda gone!