National Trails Day is today (and another missed opportunity for promotion)

The first Saturday in June is National Trails Day, and some places use that as an opportunity for promotional and service/volunteer activities, although it seems as if most places don't.

Now that I am more ensconced in Salt Lake County, where public lands issues are much more significant and the Uintah-Wasatch-Cache National Forest (USDA) is a major element of the landscape generally but also as an element of outdoor recreation, I have to broaden my knowledge base about how it all works.  (Elsewhere in the state, the Bureau of Land Management and National Park Service are big players.)

Transit access to parks and trails.  One proposal I am working on is recommending that Salt Lake County create a "county recreational transportation district" as a way to deliver to transit services to some of the park/public lands areas for environmental, access/equity, and transportation demand management reasons.  There are two different planning engagements where comments are due later this month, and I intend to have a master write up on it.

Among other places, Colorado has a number of good examples ("Looking to hike in Colorado, but don't have a car? These transit options will get you to (or near) a trailhead," Colorado Public Radio, "Launch of I-70 “Pegasus” service will test Coloradans’ appetite for mountain transit — and willingness to ride it," Denver Post).  And the Park to Playa Trail in Los Angeles County, which includes public transit access to the Kenneth Hahn State Recreation Area.  Also Trailhead Direct in King County, Washington. The issue comes up for individual canyon access, but also the controversial proposal to create a gondola transit system in Little Cottonwood Canyon ("Opinion: Five reasons Utah should reject a gondola up Little Cottonwood Canyon" and "What now? Will new buses or a gondola be the answer to a congested canyon?," Salt Lake Deseret News).   The back and forth arguing about it is comparable to opposition to light rail in Suburban Maryland and streetcars in DC.
I'd be inclined to support it, but the reality is that it would be good for intra-canyon transit, but wouldn't have any impact on the trips to get to and from the canyon to begin with, whereas a broader transit program would reduce VMT and emissions overall, could be offered year round with differentiated solutions depending on the need, etc.

E-bikes on trails, and in parks and public lands.  USA Today has a great article, "An electric bike rode into the backcountry. Now there's a nationwide turf war" (subscription required/or library database) on the controversy of e-bikes on trails in parks and on public lands.  It starts with a focus on two parks, with different policies even though they are adjacent, but one, McDowell Mountain Regional Park, is run by Maricopa County and the other, McDowell Sonoran Reserve, by the City of Scottsdale.

The county park justifies e-bikes as beneficial as a way to maximize access and patronage:

Electric mountain bikes, known as eMTBs, are more than just welcomed in this 21,000-acre playground; they’re encouraged. The county park’s 40 miles of trails include specialized tracks for competition, plus rest stops with air pumps and spare inner tubes. More than half of the visitors are cyclists. A plaque at one canopy urges, "Of all the paths you take in life, make sure some of them are dirt."

Trailheads.  In my other recommendations on biking I promote the idea of trailhead expansion.  I haven't visited yet, but the new Bell Canyon trailhead in Sandy, Utah looks to be quite impressive ("New trailhead expected to help grow one of Salt Lake County's more popular trails," KSL News).  From the article:

the new Bell Canyon Preservation Trailhead, which adds 133 parking stalls, year-round restrooms, a drinking fountain, a bike rack and an asphalt loop trail for all abilities to the Bell Canyon area.

But there are other examples.  I don't have good photos, but the trailhead for the York County, Pennsylvania Heritage Rail Trail County Park at its end/startYork is excellent from the signage and interpretation standpoint. (The trail is a continuation of the Northern Central Rail trail in Baltimore County, which starts in Cockeysville and ends at the state border, where it continues as the York HRT.) 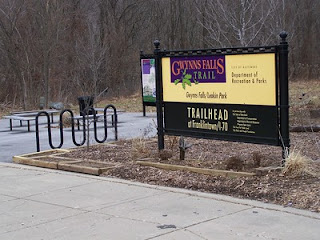 Trail/map signage.  Again, this is a big issue for me, especially for area-wide maps.  As part of being a board member for Sugar House Park, I am aiming to leverage our wayfinding and interpretation signage project as a way to promote this at three scales: (1) for Parley's Trail, which runs through on the edge of  our park; (2) for park assets in the neighborhood, including Fairmont Park, Forest Haven Golf Course, the S Line streetcar trail, McClelland Trail, and Allen Park; and (3) for the area in general.

Scottsdale seems to have a good city trails map that might be a good model for area map signage.  I mostly use the Bethesda Trolley Trail map sign as an example now. 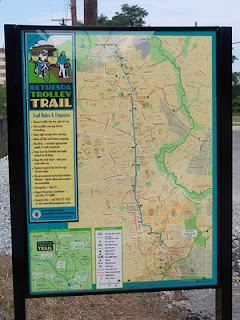 Trail access and equity.  One great thing about urban trails, and there are many such programs, is that they provide access to trails and open spaces that might not exist otherwise ("What is an urban trail and why is Elorza planning a whole network of them around Providence?," Providence Journal).  From the article:

For nearly two years, Elorza's plan has been to create what he calls an "urban trail network." An outline of the initiative describes it as a means to "connect every neighborhood with high-quality routes for people walking, riding bicycles, accessing transit, or using shared micromobility options, like scooters and e-bikes." While urban trails are not synonymous with bike lanes, they are intended to include them. According to city planning spokesperson Timothy Rondeau, urban trails are "inclusive on- or off-street paths" for various forms of non-car transportation.

Although the Urban Institute says urban trails in underserved areas have environmental quality issues ("Research addresses equity in DC’s walkability," WTOP News).
Salt Lake County's Jordan River Trail within Salt Lake City serves a traditionally poorer, underserved community, not unlike the 606 and Paseo Trails in Chicago ("A Tale of Two Trails," South Side Weekly), although there can still be equity issues present. (A friend/activist lives in the area of the JRT, and I hope to work with her on some urban design ideas there.)
Philadelphia's Circuit Trails program, a national best practice aiming to developing a system of 800 miles of trails in Greater Philadelphia, just got a $6 million grant from the William Penn Foundation ("Philly-area trail network gets nearly $6 million from William Penn Foundation to improve and expand," Philadelphia Inquirer).