Last week, I wrote a post, "Montreal first North American city with German/London style fare pass good on all transit, even local railroad services," after charlie called our attention to how the transit system in Greater Montreal is moving to a German style all-modes-in-one fare media system, which is really the first example of this in North America. 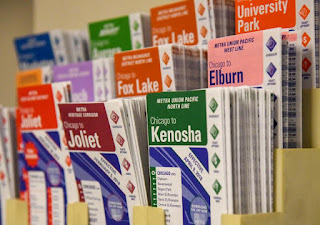 It appears that Metra, the commuter but 7 day/week railroad serving Chicagoland (mostly serving Illinois, with one line to Wisconsin, while Indiana is served separately from Metra), is sort of kind of backing into a similar system.

In the past they've had a monthly pass, ranging from $116 to $275 depending on distance ("Metra to offer new $100 monthly pass, the latest change to draw back riders," CT), plus two add on pass options for local transit--a peak CTA rail and city and suburban bus pass ($55) or suburban only bus pass ($30).

But earlier this month, to stoke ridership in the face of pandemic decline, they've moved to a $100 monthly commuter pass.  And since they've announced a $30 add on city and suburban local transit pass, for a total of $130 ("CTA and Pace to offer new pass for Metra riders, as commuting habits change," Chicago Tribune).

This is a significant reduction in price, as little as 1/3 the cost for some riders compared to previous rates.

Now it's not available in reverse, in that a CTA/Pace monthly pass for $75 can't add full rail access for $55.  But it's a start.

In a way, the Metra combo is better than the German options, because those increment higher based on zones, where due to the pandemic fall in ridership, Metra has shifted to a flat rate pass.

Conclusion: Desperation can lead to innovation.  In working in revitalization, I used to compare DC--a strong real estate market, and Baltimore--a weak real estate market, a lot, making the point that Baltimore had a "desperate willingness to experiment because they have no other choice." 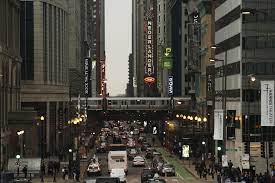 Metra and the Regional Transit Agency (RTA) are desperate because the pandemic has crashed visitorship and commuting to Chicago, destroying their ridership and revenues.

At the same time, workers are liking telecommuting because it cuts the time and cost of telecommuting.  Bosses do like outsourcing the cost of office space to workers at home, but at the same time, want to see people in the office, out of the belief (which I believe) that people accomplish more when interacting.

With such significant reductions in transit cost, this is an economic development strategy for Downtown Chicago.  Fortunately, Chicagoland has a dense center city and commuter railroad transit network where they can pull this off.

I was talking to someone who knows someone who works for the Utah Transit Authority, who told him that the cost of collecting and process money is roughly equal to the revenue collected, so that the authority could move to a free transit system at no cost*.  But the Utah Legislature--70% Republican, 90% Mormon--is opposed to providing free transit.

* Note that in high transit use systems, the fear of moving to free transit is based on a rise in ridership, requiring more personnel and more equipment, so it would cost more and revenue would drop significantly as well.