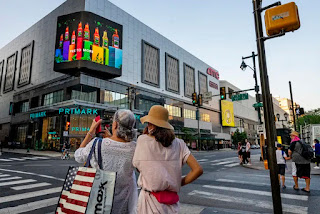 The 76ers propose a new arena downtown, on the site of the "Fashion District" mall ("The Sixers want to build a new $1.3 billion arena in Center City").

An article in the Philadelphia Inquirer makes the point that the "fashion" initiative had no legs because of white flight and a change in the industry in terms of fast fashion ("White flight and fast fashion meant Market Street never got the attention it deserved. Could the 76ers change that?").  From the article:

The new arena would prove a few things: First, in this town, fashion will never be the game changer sports is. We like to think of ourselves as stylish, but the truth is Philadelphians are more likely to rally around James Harden than around haute couture. More importantly, it will test whether the city really can provide the infrastructure, investment, and urban planning solutions necessary for Center City to realize its full potential.

It will also would prove that it takes an influx of people from outside of the city for Philadelphians — especially those who live in underrepresented communities — to get the amenities we deserve in what’s supposed to be our downtown.

I do think she's right about "white flight" and downtown retail more generally.  For the most part, suburbanites shopping needs are met by options in the suburbs.

They don't need to shop in the city, and/or they aren't buying such exclusive items frequently enough to go shop in the city.  Although the article points out that some of the stores there, like Century 21 and Ulta, were popular with actual city residents.

I do believe that basketball and hockey arenas should be located downtown and that they can contribute positively to economic development. 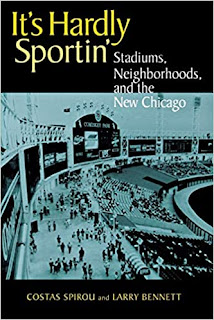 It took me too long to admit that, partly because even though downtown arenas can be "a good thing," they are still oversold and don't accomplish as much as is touted.  That's the point behind this blog entry:

which is aimed at identifying the characteristics that make for an arena that is more successful for the local community.

Frankly, there are plenty of in-city arenas and stadiums that don't have the kind of economic effect that is touted.  So the point should be to shape the project to get the best possible results.

But you still need a wider ranging plan, because an arena or stadium is only one element of what should be a "transformational projects action plan."

Nonetheless, such facilities can reposition downtowns, attract new audiences, contribute to economic development, and ideally leverage existing transit in a way to shift trips from cars.

A big element is the size of the city and transit.  Smaller market cities tend to have weak transit cities, and the majority of patrons drive to the arena or stadium, and this seems to reduce their propensity to patronize local establishments.

Interestingly, a different PI article ("Philly’s next mayor should boost city’s recovery, say biz leaders. ‘We need somebody that smiles.’."), saying the city needs a mayor who is a cheerleader, mentions the arena proposal and uses DC's Capital One Arena as an example of why a downtown arena project is important to Philadelphia:

“Just go to 16th and Market Streets,” Pearlstein said. “That used to be like the 50-yard line at lunchtime. But now Market Street has a long road to recovery.”

The possibility of a new 76ers arena in Center City “could drive midafternoon traffic on East Market Street, which has struggled even with the Fashion District,” Cooper said.

Much like the Capital One Arena in Washington, D.C., a Sixers stadium on Market between 10th and 11th Streets could “create enough gravity to attract restaurants, offices, and residential buildings, which followed the building of the arena. But we still need improved transit,” Usdan said.

Sports patrons don't spend on non-sports retail.  But such facilities can only do so much, especially because they support such a narrow range of "retail" that the spillover benefits are not as significant as people believe (see It's Hardly Sportin': Stadiums, Neighborhoods and the New Chicago, about how the Wrigleyville commercial district changed to a nightlife district from a mixed use retail district, after the Chicago Cubs stadium added lights and night baseball.)

What if teams aren't so great, with poor attendance?  Plus, what happens when the teams start failing and attendance drops off.

For example, the Washington Nationals baseball team, now that it's tanking a couple years after winning the World Series, is suffering severe attendance falloff--the team is now 19th of 30 in average attendance.  That has to be hurting all the eating and drinking establishments that have opened around in the Navy Yard area.

Similarly, the NBA and MLB All Star Games and the NFL Super Bowl, when it comes down to it, don't have much effect on the local economy either, especially non-food retail.  This is because much of the money expended on travel and lodging ends up in the pockets of companies that aren't locally based.

Academic writings.  I hate to admit that I never did much of a literature search when I began development the "framework characteristics" pieces, starting first with Sacramento in 2014 ("An arena subsidy project I'd probably favor: Sacramento").  Some of the work supports my argument.  Some is till more positivist than critical-analytical.

Economic impact of individual spending by sports patrons.  When I first got involved in urban revitalization, wrt the H Street NE neighborhood in DC ("The community development approach and the revitalization of DC's H Street corridor: congruent or oppositional approaches?," 2013), one of my earliest writings was about cultural assets, given the then presence of the Children's Museum, the fallow Atlas Theater, and the then developing H Street Playhouse (it moved, now it's the Anacostia Playhouse).

I touted the spending multiplier compiled by Americans for the Arts, but making the point that spending was likely to be less because it wouldn't involve overnight stays.

-- Arts & Economic Prosperity 6: The Economic Impact of Spending by Nonprofit Arts and Culture Organizations and Their Audiences, Americans for the Arts

Anyway, it would be interesting to drill down and generate a more detailed understanding of sports patron spending.  Is there a difference between people who get to the venue by transit versus driving?  Families versus individuals? Season ticket holders versus occasional attendees?  In-city versus metropolitan area versus out-of-the area in terms of domicile?  How much spending is captured by the team/arena versus off-site venues. Etc.

Also the bears in Chicago are looking for new stadiums.

Yeah, I saw that about the Bears. They are really committed to moving to the suburbs. Since that's the case, it's a shame that Richard Daley wrecked the stadium from the standpoint of historic preservation, losing its recognition as an intact historic site.people

I've made a similar point before, that there is a difference between "doing" and "coordinating" and agencies that coordinate don't have the kind of spillover benefit that people think (eg FDA). Eg, with Obamacare, DC was saying that it would make the city a leading place for health research. But at that level, it's just contracts, not doing.

Even if those projects prove transformational, experts say, it’s unlikely to change life in the agency’s host city.

“It’s the location of the performer, not the funder, that matters,” said Bhaven Sampat, a Columbia University professor who studies the politics and economics of government-funded research.

In other words: If the agency awards a contract to a company based in San Francisco, the economic impact will be felt there — not in the city where an ARPA-H employee handles the paperwork.

Even the agency’s workforce might not do much to bolster the local economy or create scientific prestige. DARPA, the Pentagon science agency that ARPA-H is modeled after, only employs about 200 people. ARPA-H, with a budget one-third the size of its sibling agency, will likely be even smaller.

=====
This gets to the point I make about there being a difference between "building a local economy" and "economic development." The latter just focuses on top numbers, the gross grain number, not the specifics.

This is a big thing of course with big sports events. Big top numbers, but when you go super micro, the local impact is a lot less.

The article talks about "the Halo effect" in that it can help. That's the same thing with the sports events. I do think, in an existing science based area, it does help some. It's one more asset, in a string of them. But it's not the same as a big lab.

And even then, we learned with the Pfizer closure in Ann Arbor, and the resuscitation of the bioscience sector there, that big company labs do a lot, but as part of a big company, many key functions happen in other cities, and smaller companies may keep more of those functions on site, generating more employment.

====
Am copying the related Stat News stuff into the comments in the Pfizer entry.