Weird intra-governmental spat in DC over the Washington Nationals stadium

-- board of directors
-- staff

Technically it's independent of the city government, but its top officer and board members are appointed by the Mayor and City Council.  It holds the city's financial interest in facilities like Washington Nationals stadium, the Wizards practice facility, the RFK complex, the Convention Center, etc.

It's not particularly forward thinking when it comes to its facilities and urban planning ("The time to plan for retail in and around the Convention Center was long before it opened in 2003 and certainly before 2015," 2015, "Yes, modify and extend the RFK Campus lease; No, don't do it for the Washington Redskins football team," 2018), but then again, the city government's commitment to planning is constantly shrinking and diminishing too. 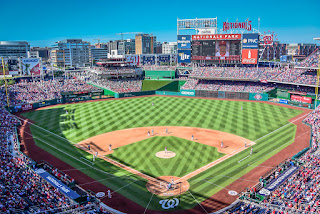 The Washington Post reports ("D.C. threatens to shut down Nationals Park, putting events at risk") that the Department of Consumer and Regulatory Affairs, which is responsible for building regulation, is threatening to not renew the certificate of occupancy for Washington Nationals stadium--which is owned by the city and rented by the Washington Nationals baseball team--because Events DC hasn't followed through on providing related retail and commercial space development that was part of the original agreement.  From the article:

The District is playing hardball in a dispute with the owner of Nationals Park, effectively threatening to shut down the stadium if Events DC fails to develop the commercial and retail space it promised before the ballpark’s 2008 opening.

Under its original agreement with the city, Events DC had pledged to build 46,000 square feet of commercial and retail space around Nationals Park, located along the Anacostia River in the Navy Yard neighborhood. But the company — arguing that the “extremely unique circumstances” of the pandemic and other business factors have made those initial plans unworkable — now is seeking to be released from that responsibility.

If no deal is reached, the dispute could threaten games, concerts and other events scheduled to be held at the ballpark.

This is very interesting because it's one department of the city arguing with another department, both within the executive branch.  I mean, it's not like the arguing that is typical between the Executive and Legislative branches, this is an intra-government tiff.

Clearly the Mayor isn't happy with Events DC--I don't know why because I am increasingly distant from day in, day out intra-city happenings--because this wouldn't be happening otherwise.

Obviously, Events DC isn't doing what the Mayor wants.  And an attempt to deny a C/O is a very public way of saying so.

It might not even be about the Nationals Stadium specifically, but that this is the best "point of entry" in the Mayor executing her best leverage.

And it could be about the director, who is new and interim.  I guess that Greg O'Dell, long time CEO, left for the private sector a couple years ago ("Greg O’Dell Named OVG360 President for Venue Management," SportsTravel).  He's now with Oak View Group, which was created by people who had worked for years at AEG--OVG is involved in facilities for the Seattle Kraken and the New York Islanders among others.

FWIW, EventsDC is probably right that the market doesn't support adding that space, and that it would be better for the private sector spaces to be activated.  Plus, they are crappy at managing non-sports functions in their spaces.

And the Mayor probably believes she made her point, since DCRA is issuing a temporary C/O) while negotiations continue ("D.C. backs off threat to close Nationals Park," Post).

Certificate of occupancy and sports facilities.  I didn't realize that DC didn't issue permanent C/O for sports stadiums and arenas.  NYC issues sports facilities (or at least Madison Square Garden) C/Os with a ten year term, which allows for revision of agreements and gives the city leverage.  But those facilities are all privately owned.

I like the idea of ten year terms to be able to "force" transportation demand management agreements on teams ("Framework of characteristics that support successful community development in association with the development of professional sports facilities").  But that only works if the facility is owned by the team.  In DC, only the Capital One Arena is privately owned.

When the government owns the facility, TDM agreements need to be part of the lease with the tenant--the sports team.