The Express blog cites another blog's comment about Silver Spring, "The price of urban renewal," and how a friend of the blogger commented that it reminded him of Disneyworld.

I have made this point for years, long before I began blogging, on national e-lists, and in email to Annys Shin, one of the business reporters for the Post in the Montgomery County bureau.

Silver Spring exemplifies the difference between "revitalization" which is a rebuilding strategy based on assets: buildings (usually historic); businesses; people; organizations; versus "redevelopment" which looks at the only asset being present as land, land that needs to be cleared and redeveloped into something new.

The revitalization strategy is best exemplified by the "Main Street" Approach or the "Community Economic Development" approach outlined by Mihalio "Mike" Temali. It's the difference between saving Eastern Market and a Giant Supermarket, or between revitalization the Florida Market and clearing it and starting "fresh."

Now it's not true that this is fully the case in Silver Spring. There are extant assets. The Silver Theater is one, and I rue the fact that they were able to make such an arrangement with AFI, whereas the Tivoli Theater in DC would have been perfect for such a venture. Regardless of what you think about Doug Duncan, he does appreciate the economic development power of arts and culture (also see the Strathmore Center). Mayorga Coffee is another. And Crisfields! 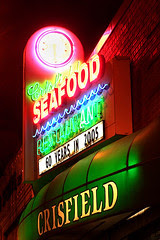 On the other hand, it's the kind of place where an arts organization (!!!!!!!!!!!!!!!!!!!!!!!) demolished one of the few remaining Little Tavern buildings, and it has City Place, a pretty gross "urban mall" within the city, and it is attracting mostly chains. 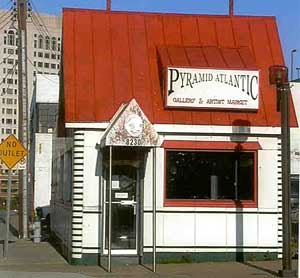 From "Historic Maryland Eatery at Center of Preservation Debate." To quote Neil Young, "once you're gone, you ain't ever comin' back." Photo: Silver Spring Historical Society.

It's getting more Bethesda-like by the day, and while Bethesda Row is interesting, although skewing towards chains, and a good example of new urbanism (see this blog entry: Why are people so damn good at asking the wrong questions?) the fact of the matter is that the rest of Downtown Bethesda is placeless and faceless. Silver Spring is hurtling towards the same future. (Which is why if I were a Maryland resident I would have voted for Martin O'Malley in the primary...)

On the other hand, given that most people grow up in faceless placeless places, maybe that's the best way for Silver Spring to compete within the automobile-centric Montgomery County market.

The cool stuff, the independent businesses are finding it hard to survive. So much so that a student urban design studio from UMD provided Montgomery County with a slew of suggestions about Minimizing Small Business Displacement.