I have been meaning to write about this for a week or two, and then Tom Toles' editorial cartoon from today brings it to a head (from the Washington Post). 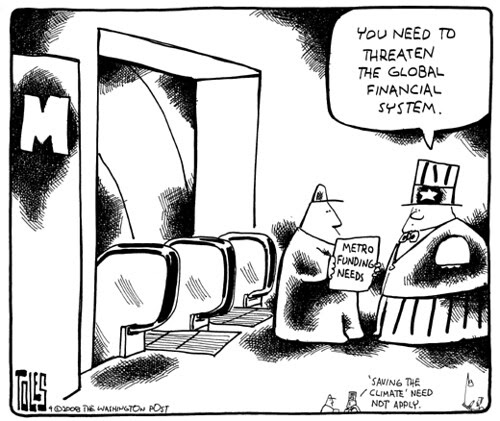 This editorial cartoon specifically refers to the appropriateness of a federal role with funding the local subway system, and a pending proposal to provide $150 million/year for 10 years in federal funding, a proposal that may well die with this particular Congress. This proposal has been seized upon by conservative think tanks and called "the largest federal earmark of all time." (WMATA has received a lot of federal funding over the years, although partly this was from funds allocated to states.)

So the editorial cartoon is making the point that if the WMATA funding issue were a crisis of greater proportions, then the funding would come through for the local subway system.

Last week, WMATA announced that it needs $11 billion to fund capital improvements, with about 2/3 of this for repair and maintenance of a system that is beginning to show decline as it begins to age (it's now 32 years old from the date of its opening).

Something I think about from time to time is the fact that the U.S. Congress ordered the dissolution of the DC streetcar system in the early 1950s, after choosing to not renew the franchise, ostensibly in response to a worker strike. (The system was replaced with buses completely in 1962.) This means to my way of thinking that the Federal Government has a special responsibility for rebuilding transit in the region, because the Federal Government has responsibility for the wrecking of fixed rail transit in the region. (Although I recognize that streetcars were on the decline regardless.) 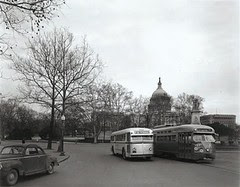 Bus and streetcar by the U.S. Capitol. Horydczak photo, Library of Congress. 1947.

Add to this the fact that the federal impact on local planning as it relates to transportation is under-considered within the "transportation element" of the Federal Elements of the DC Comprehensive Land Use Plan. The Federal Elements are produced by the National Capital Planning Commission, a federal agency, and are paired with the local elements, produced by the DC Office of Planning with the assistance of other agencies, and approved by the DC City Council.

In my opinion, the transportation element of the Federal Elements could be much stronger, calling for a stronger federal role in funding the transit system, acknowledging the impact of Congress on wrecking the streetcar system, and mandating direct federal investments in transportation when federal planning actions lead to massive changes in the mobility pattern and paradigm in the region.

For example, the closing and relocation of various military installations as a result of (Military) Base Relocation and Consolidation (BRAC) program means that a number of well connected by transit facilities are being closed, and replaced by new installations in exurban or far suburban locations, in locations with extremely limited transit connections, and requiring large local expenditures to upgrade the road system to accommodate new vehicle trips.

BRAC related transportation planning with regard to the impact on relocation of a number of facilities to Fort Belvoir, because of the transportation impact, seems pretty poor, based on reading articles such as "Army to Relocate 6,400 Workers to Alexandria" and "Springfield Site Losing Out to Alexandria for Defense Jobs" from the Post.

How can it be acceptable to put 6,400 workers at a location that lacks convenient subway access?

But as a planner for a Virginia jurisdiction who attended the H Street alley tour a couple weeks ago pointed out, if land use changes such as BRAC (or the creation of the National Harbor project in Prince George's County) came up in California, under the California Environmental Quality Act there would be a detailed and thorough response and evaluation. Federal planning requirements are not as stringtent.

Likely, with CEQA, BRAC-like relocations wouldn't be approved without mandatory improvements in the transportation infrastructure, and relocations would be steered to locations with better transit infrastructure. Similarly, the Transportation Element of the Federal Elements feels weak to me. A big part of the section is how parking requirements are weighted according to where in the region the facility is to be located, and how close to the subway.

Instead, based on the number of employees I would set up an additional formula, requiring supplemental federal funds to assist in transit infrastructure expansion, paired up with stronger transportation demand management planning, to shift more trips away from cars.

This is a great post about federal government transportation planning in the dc region.
Visit here to buy online medicines-"online pharmacy usa"