Don't use the local water: Parkersburg, WV and Flint, MI

Many years ago, I saw a presentation by Eric Freidenwald-Fishman of the Metropolitan Group, on "Building Public Will."

One of the examples in the presentation was about the environmental health of rivers, and how "building public will" you need to reach people with messages that resonate in terms of their pre-existing values and interests. 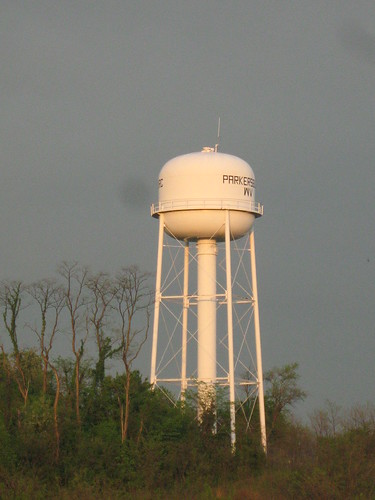 Parkersburg, WV.  A couple weeks ago, the New York Times Magazine had a blistering article ("The Lawyer Who Became DuPont's Worst Nightmare") on how Dupont Corporation's facilities in Parkersburg, WV utilized in the production of Teflon a chemical that appeared to have significant negative health effects, and for decades the company ignored this fact and improperly disposed of the chemical, so that the area water systems are mostly contaminated by it, and because the company has extraordinary power in the state, the state agency concerned with the environment and responsible for regulating chemical and mining companies is controlled by industry, and so there is no real impact.

Death clusters for both people and animals, whitewashed by the company and the state agency led a resident to reach out to a lawyer who once had relatives in the area, who he had visited when he was young.

The big element in the story is that the plaintiffs are represented by one of the nation's leading "white shoe" law firms, which historically represents the chemical industry on such matters. The lawyer was incredulous that a company could act in such improper ways as a matter of course.  While difficult internally, the law firm, Taft Stettinius and Hollister, has stuck with the case. 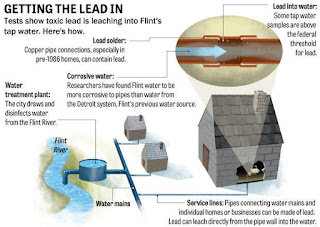 Flint, Michigan.  Flint is getting national attention as the EPA is stepping in to deal with the contamination of the water supply there, which resulted from the city changing from "Detroit water" (water produced by the Detroit Water and Sewer Agency supplies most of Southeastern Michigan and is drawn from Lake Huron and Lake St. Clair) to water from the Flint River.

The reason the city switched water sources is because it was cheaper and the city is bankrupt.  While a goodly number of commenters on media sites blame "the Democrats" for driving Flint into bankruptcy, the reality is that the city is broke because for all intents and purposes, General Motors shut down most of the manufacturing plants that had been there--the company started in Flint.  At one time

Chemicals are added to water in the treatment process to limit problems. It turns out that chemicals are added to water as part of the treatment process in order to reduce the likelihood of particle leaching from build up in pipes, and to reduce corrosion of water piping systems--the systems tend to be old and constructed out of a variety of types of piping ranging from iron to copper to lead, and lead piping in particular is susceptible to corrosion.  Lead is particularly harmful to health, causing brain damage and cognitive impairment.

EPA "Lead and copper rule" is designed to reduce pipe corrosion and chemical contamination in drinking water systems.  This rule requires that water systems test their water regularly and treat it to limit corrosion of piping systems.

Flint, the State, and the Michigan Department of Environmental Quality failed to create an LCR plan. When Flint switched water sources, they should have already tested the water and figured out its chemical characteristics and come up with a chemical treatment combination for the water from the Flint River, to limit leaching and other problems.  The Detroit water system, when they were providing the water to Flint, were doing this already.

They weren't treating the water at all.  They didn't do this.  That's the reason for the problem, not that Flint River water is particularly bad, but that they failed to take the most basic and necessary steps to ensure the change would be straightforward and successful, with no negative outcomes.  So the more acidic water from the river increased significantly corrosion of the water system, releasing lead and other chemicals from the piping system. 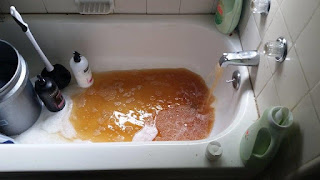 They lied to EPA about having a plan. According to the timeline post on the Flint Water Study website, when queried by the EPA in response to resident complaints about water quality--many people were getting "brown water" when they turned on their faucets, Flint/MDEQ said they had an LCR plan in place and that they were treating the water with the right chemical combination to reduce leaching from the piping system. But they weren't treating the water at all.

The aftermath.  The city is providing bottled water, and the National Guard is helping to distribute it ("More National Guard Troops Move into Flint as Water Crisis Widens," NBC). The city announced that they will switch back to "Detroit water" although that isn't really the issue.

The problem is now there is significant corrosion of old pipes but they don't know where, and even flushing out the system before switching back to Detroit water might not eliminate the problem, although the expectation is that the lead levels will drop significantly after one month.

An alternative, rebuilding the water distribution system, would cost billions, and would take years.

Is this a Republican problem?  In both West Virginia and Michigan you have Republican governors and the state government apparatus is controlled by Republicans and a business-friendly agenda that de-emphasizes regulation.

In WV, local water systems, some publicly owned, some privately owned, are following the pro-business line.

In Michigan, this was more an issue of state politics in terms of the Governor's being able to appoint "emergency managers" to supersede elected officials to make extraordinary changes to improve local finances, but perhaps also as a way to show up cities, which tend to be helmed by Democrats, especially in Michigan.

In either case, the Republican anti-regulatory ideology likely influenced these outcomes.  In either case, citizens are the losers, either to corporate profits or political philosophy and ideology.

I am your big fan, thanks for sharing,
Sometimes as hard as it is you have to call a bankruptcy lawyer, You just can't figure out all of the financial problem on your own. Friends family and the internet isn't going to do it for you.
Boston Bankruptcy