The media is full of articles and stories about the impact on Texans from the power outages, where as many as 4 million households were left without power in the face of bitter cold temperatures, such as this Washington Post article, "The power is back, but millions of Texans wonder what it will take to fully recover — and who will help them," which alerts us to particular tragedies such as a trailer park home to low income households having most of its water system wrecked, or people who died in part because of how the cold accentuated health conditions. 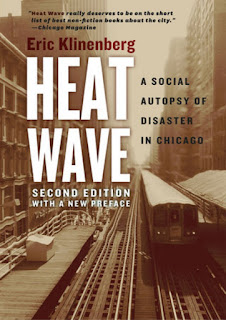 -- "Talk and lying versus doing: The electricity crisis in Texas is produced by state regulatory failure"

which has caused billions of dollars of damages and dozens of deaths, I thought about how to position the article, and one of the ways was "Cold Wave," as an opposite of Eric Klinenberg's book Heat Wave: A Social Autopsy of Disaster in Chicago, which I had just mentioned because it was featured in a recent program broadcast on PBS.

Heat Wave studied the extranormal number of deaths in Chicago during a heat wave in 1995.  The deaths were disproportionately a result of poverty, isolation, and lack of personal and community resources. 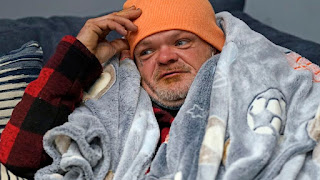 Brett Saint rests inside a Gallery Furniture store which opened as a shelter for those in need of food, water and heat Wednesday, Feb. 17, 2021, in Houston. Millions in Texas still had no power after a historic snowfall and single-digit temperatures created a surge of demand for electricity to warm up homes unaccustomed to such extreme lows, buckling the state's power grid and causing widespread blackouts. (AP Photo/David J. Phillip)

Cold Wave is pretty much the same thing. 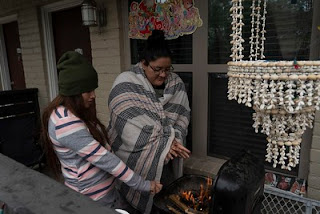 HOUSTON, TX - FEBRUARY 16: Karla Perez and Esperanza Gonzalez warm up by a barbecue grill during power outage caused by the winter storm on February 16, 2021 in Houston, Texas. Winter storm Uri has brought historic cold weather, power outages and traffic accidents to Texas as storms have swept across 26 states with a mix of freezing temperatures and precipitation. (Photo by Go Nakamura/Getty Images)

While in most cases, the well off--people with more resources--do better in troubled times, in this case people lost power whether or not they were well off, although many well resourced people had previously installed back up generators, bought trucks that could also double as generators ("Texas man uses new 2021 Ford F-150 to heat home, power appliances during blackout," Detroit Free Press), the reality is that the people who are suffering the most are people who are impoverished, people of color, people with health issues, etc.

Meanwhile, the Ted Cruzes can fly to Mexico.

Example of neoliberalism overreach at a massive scale.  Neoliberalism has been the dominant political and economic ideology of the past 45 years. It argues that the market is the best arbiter and deliverer of services of all types, that the profit motive and competition yields the best results. And that government always fails.

Both conservatives and liberals are adherents, although conservatives tend to favor minimal to no regulation, while liberals see the need for regulation to ensure a level playing field and some protections.  Neoliberalism is a separate phenomenon from globalization.  Combined, the two increased precarity without providing much in the way of backstop.

The Texas Legislature created an electricity market with limited requirements on firms, and encouraged "race to the bottom" business models that only worked without problem in normal, not extraordinary, conditions.

Extreme cold and extreme heat lead to significantly increased prices.  But at the same time stress the minimal reliability built into the system resulting from the lack of basic resilience requirements ("How Texas’ Drive for Energy Independence Set It Up for Disaster," New York Times).

Now Texas electricity businesses are declaring bankruptcy because they don't have the money to pay the high charges that were incurred during the peak of the crisis ("Texas Energy Co-Op Files For Bankruptcy After Storm, High Bill," NPR).

Here’s how much winterizing the Texas power grid could impact your power bill.
https://www.wfaa.com/article/news/local/investigates/texans-could-see-higher-electricity-bills-to-pay-for-power-plant-winterization-experts-say/287-5e7fd5ed-2c43-4fad-a786-a27308f9c234

The article says it would cost $5B - $20B to winterize at 1% of the cost of building a plant. About $10/mo. on the electricity bill, but people don't want to pay it. By contrast, the debacle cost about $300B, and a few hundred deaths.

Berkshire Hathaway and another company are offering to build a series of power plants and storage facilities to ward off such failures in the future, for about $8B. I guess that might be cheaper than full winterization of the current system, but why should they make $ off the misfortune, just fix the system.

Carbon monoxide poisoning was a large factor in deaths due to the electricity failure, because many people weren't aware of its health effects, Texas building codes mostly don't require carbon monoxide detectors.

This is definitely a "cold wave" kind of issue as it disproportionately impacted POC.

Extreme weather related events and the impact on the grid isn't limited to Texas:


or winter, as summer blackouts are expected to increase:


---------
It reminds me of living in DC and it seemed like rain-related events got worse and worse. We finally had to install french drains and a sump pump. I lamented that it hadn't been done by the previous owner, who had lived there for 50ish years.

Suzanne commented that probably the rain events weren't as bad then.

Last fall, we had to install a second sump pump!, after an extreme rain dumped many inches of rain within an hour. Our house was on the edge of the most extreme rain.

This is probably the issue in WV. Despite all the money the utilities are spending, the weather events are getting worse. (Or how as long as demand is greater than supply for housing, new additions to supply don't result in lower rents, because demand is still unmet.)