University President Freeman Hrabowski and an agenda for urban universities

======Slightly revised and reprinted from Thursday September 2nd.
1.  Change in the headline.
2.  Addition of Robert Lang as an example of involved university faculty members having extranormally significant community impact.
3.  Addition of link to Chronicle of Higher Education report, "Campus As City"
3.  Addition of Collegetown recruitment initiatives in Philadelphia and Baltimore, which I forgot to include before.
====== 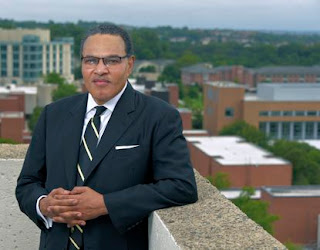 Baltimore Sun photo.
Freeman Hrabowski has been the president of the University of Maryland Baltimore County for a few decades.

In that time, he has .made it one of the nation's pre-eminent institutions in terms of preparing minority students for graduate and professional schools in the sciences and health professions ("Freeman Hrabowski's UMBC legacy grows as he celebrates 20 years as president," Baltimore Sun).

The Washington Post reports his announcement that he is retiring, and mentions in passing that he gave up opportunities to move to more prestigious institutions because he thought he was doing particularly important work at UMBC ("Longtime UMBC president, who turned school into top producer of Black scientists and engineers, to retire").

And have mentioned in passing in various articles about how some types of higher education institutions are more leverageable than others, engineering and business ("Cornell and Technion institute open high-tech campus in NY," Times of Israel), and medical and health ("University of Incarnate Word expanding its Brooks campus," San Antonio Express News), but not law ("Words of Hope for a troubled community," Washington Post).

Reading about Freeman Hrabowski again -- from the Baltimore Sun article ("UMBC’s Freeman Hrabowski, who turned school into a model for producing minority scientists and engineers, to retire in 2022"):

UMBC’s graduation rate is now about 70%, up from less than 52% two decades ago. Investment in new construction has increased from $118 million to $1.2 billion over the last decade of his tenure, and the school’s annual spending on research each year — though still a fraction of the Johns Hopkins University or University of Maryland, College Park — has risen to $84 million from $10 million. UMBC now boasts research centers in such areas as computing, space and atmospheric sciences, and the social sciences.

Between 2010 and 2019, UMBC had more Black graduates receive doctorates in the sciences and engineering — 146, according to federal government data — than any other university in the nation, eclipsing historically Black colleges and universities like Howard University and academic powerhouses like the Massachusetts Institute of Technology and Cornell University.

makes me realize that "all" major urban universities focusing on first generation college student education, especially with minority students, ought to be aiming to develop programs similar to those at UMBC.

Also see "A prescription for more black doctors" from the New York Times Magazine, about a similar initiative at Morehouse College in Atlanta.

Note that this concept of boosting the number of people of color in the medical professions was one of the foundational elements in the concept behind the series of articles about leveraging the United Medical Center rebuilding to seed a biotechnology and medical education initiative at the St. Elizabeths west campus in the Congress Heights neighborhood in East of the River section of DC.

UMBC, Towson State, and Baltimore County.  Interestingly, I would say that Baltimore County hasn't been particularly stellar in leveraging its universities (UMBC and Towson University primarily) for economic development, the same way that College Park and Prince George's County have not truly leveraged the presence of the University of Maryland. 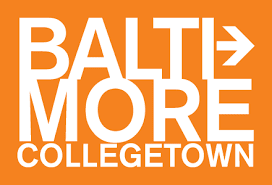 College student post-graduation retention programs.  In the mid-1990s Baltimore and Philadelphlia around 2000 created "college town" initiatives aimed at making their cities "better" college towns, more like the feel in places like Greater Boston and Berkeley in California, etc.

From "PUTTING THEIR TOWNS ON THE MAP: Baltimore and Philadelphia institutional and city planners are working together to create great college towns," Business Officer, NACUBO, September 2005:

The Baltimore and Philadelphia networks are both pursuing a three-pronged strategy to improve their respective collegetown images: attract, engage, retain. First, to attract quality students to the area, promote prospective students’ awareness of each city as an enticing college town. Second, once they are enrolled, engage students in all the city has to offer—culture, sports, shopping, volunteerism, and internships. Third, by enhancing student experiences and promoting community engagement, tackle the “brain drain” phenomenon and retain students in the region after graduation. 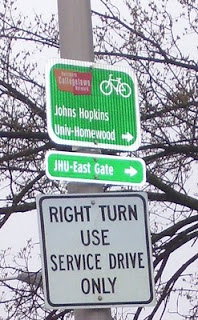 From a transportation demand management standpoint, the Baltimore Collegetown Network has a shuttle bus system linking the various universities, and a defined set of bicycle routes between some of the campuses.

(I wanted Baltimore County to work to extend these routes to UMBC and Towson State University).