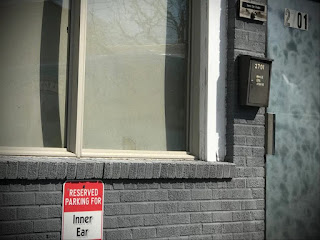 The Washington Post has a "funny" story, "Once the ‘Abbey Road’ of D.C.’s punk scene, it’s being bulldozed for a government-sanctioned arts district," on how the Green Valley community in Arlington County, Virginia's desire for the creation of an "arts and industrial district," in part spurred by the existence of the Inner Ear Studio as an anchor, is leading to the demise of the studio.

Inner Ear has been key to the development and maintenance of the DC area's punk rock scene and the creation and existence of the Dischord Records label.  From the article:

For the neighbors who first pushed for an arts district, it’s a cruel consequence of their idea — particularly because they wanted to complement, not end, Zientara’s longtime presence on South Oakland Street.

“Losing a small, yet significant, arts-related business is antithetical to this vision,” Robin Stombler, acting president of the Green Valley Civic Association, wrote in a letter about Inner Ear to county lawmakers earlier this year.

The 2700 block of South Oakland Street in Arlington
is definitely light industrial, lending itself to arts as production.
It's funny because it's a backwards way to support the "expansion" of an arts district.

I say expansion because usually the designation of an arts district initiative usually follows the ground up development of a nascent district where a variety of artists and disciplines coalesce and develop visible critical mass in part attracted by low rents and workable buildings ("BTMFBA: the best way to ward off artist or retail displacement is to buy the building").

So when you move to a formal initiative, FIRST you inventory your assets, physical like facilities, and tangible and intangible, in people, businesses, and organizations.

It doesn't seem as if Arlington has done this, if their first act is to buy "a building" but not for it as an existing space, but merely for the land value, and in the process, eradicate a leading asset in the nascent arts district.

Buying buildings to tear them down and evict arts uses is the opposite of what you want to do.

Arts as production versus arts as consumption.  FWIW, my initial 2009 entry on this topic, "Arts, culture districts, and revitalization," was for a presentation at a national theater conference.

The original piece distinguishes between "arts as consumption" (like people going to museums and concerts) and "arts as production" (working artists, firms, and organizations producing "art"), and references the work of John Montgomery* on arts districts:

A few years later, I learned about the Arabianranta arts district in Helsinki, which also has more of a business tinge, arts as production focused, anchored by an arts and designed focused college and businesses which located there, attracted by proximity to the college (""Developing creative quarters in cities: policy lessons from 'Art and design city' Arabianranta, Helsinki," Urban Research and Practice, 6:2 [2013]).
Anyway, most US "arts districts" efforts aren't so nuanced that they understand the difference between arts as production and arts as consumption.
And Arlington, which in the DC area, is quite advanced in terms of providing and acquiring spaces for arts uses, proves the point.
FWIW, the Penn Ave Arts Initiative in Pittsburgh is an excellent example of an arts district focused on both consumption and production, and grew out of a recognition by two community organizations that an arts district was already developing through the efforts of artists and organizations locating in the area, attracted by quality of life, available properties, and close proximity to the core of Pittsburgh ("Artists bring flourish to Penn Avenue," Pittsburgh Post-Gazette, "A Transformed Penn Avenue," Pittsburgh Magazine, Vacancy to Vitality in Pittsburgh’s East End: Penn Avenue Arts Initiative, case study, Metris Arts Consulting).
Recording and preserving a community's cultural history around music.  Ironically, Arlington's odd action also raises the issue of music history and preservation as an element of community cultural planning ("Leveraging music as cultural heritage for economic development: part two, popular music," 2017), for which most community cultural plans fail to pay attention. 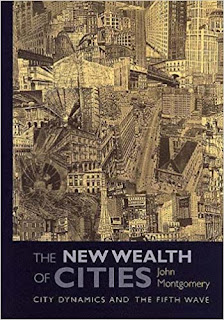 *  Cities and the creative economy.  A lot of people look to the work of Charles Landry on cities and the creative economy.
It's great work and he's a great speaker, but to me, Montgomery's work is more focused on the nitty gritty of creating arts districts as urban economic development initiatives.
Other good resources by Montgomery include his follow up and expanded book on the topic, The New Wealth of Cities: City Dynamics and the Fifth Wave.
I wanted to include a link to Montgomery's second paper, "Cultural quarters as mechanisms for urban regeneration. Part 2: a review of four cultural quarters in the UK, Ireland and Australia." This is an odd link, the webpage is in Urdu, but it works.

This is a counter example in the Uphams Corner section of Boston.

They created a cultural plan first, well maybe not a full blown plan, but a concept, incorporating the existing city-owned Strang Theater, and then released an RFP for adjoining land, specifying what they want done with it, in part arts related, in part not arts related.

Yea seems batsh*t crazy they are buying and demolishing the primary arts space in the neighborhood... And maybe in the future will rebuild it as a performing stage???