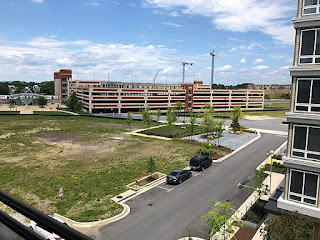 Comments are due by 5pm Monday.

The definition of the word Downtown is

of, in, or characteristic of the central area or main business and commercial area of a town or city.

While PGC is somewhat center-less more generally, the closest it has to a center is New Carrollton, and I've suggested for years that if PGC wants to truly become a "transit oriented development" kind of place, it should re-center its government functions there ("Setting the stage for the Purple Line light rail line to be an overwhelming success: Part 4 | Making over New Carrollton as a transit-centric urban center and Prince George's County's "New Downtown"," 2017, first published 2014).

Instead, it has the belief it is doing so around Largo and the Largo Town Center Metrorail station, and it has moved a bunch of government agencies there, but few that are citizen-facing. 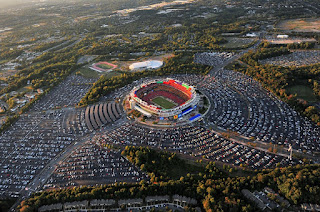 Most football stadiums are surrounded by a sea of parking lots and FedEx Field is no exception.

But for the most part, the land uses are de-concentrated, there is a failing retail center ("Redeveloping Largo shopping center aims to be the Pike & Rose of Prince George’s," Washington Business Journal), a new hospital ("University of Maryland could seed a complementary biotechnology and medical education initiative in Prince George's County"), and the FedEx Field stadium is a 1.5 mile walk away. 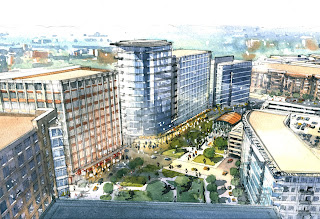 Rendering for an intensified Largo.

The hospital building is the tallest, but there is nothing that speaks of a concentration of business activity.

Although to be fair, there is a long term plan for intensification, and the reality that such a plan is a couple decades away from realization -- for example, PGC Planning created a transit oriented development plan for the West Hyattsville station that 25 years later, still hasn't been realized.

I suppose from the standpoint of "rename it and they will come," a name change could be justified.

But it seems incredibly premature.

The reality is that renaming the station by including the word "Downtown" diminishes the meaning of  the word. 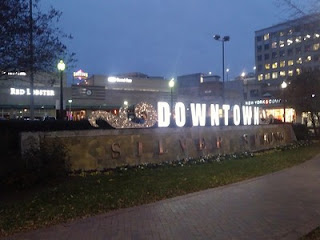 By comparison there are many conurbations in the metropolitan area besides Downtown DC -- Rosslyn, Crystal City, Tysons Corner, Reston, Bethesda, Silver Spring, some parts of Alexandria, even the Southern Towers apartment complex in Fairfax County -- that have the kind of density and concentration that justifies being called a Downtown, but is lacking in Largo.

In order to promote "legibility" and accuracy within the Metrorail system, using the word Downtown to describe station areas which have few if any of the characteristics "of the central area or main business and commercial area of a town or city." should not be countenanced.

I always thought it was built to its density (like with the office buildings at Prince George's Plaza) on the expectation there would be high frequency rail transit.