Unforced Error: DC Officials Bobble the Ball When it Comes to Transit, Urban Design and the New Stadium 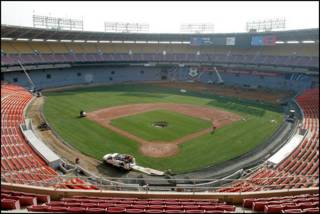 In real estate, it's all about location. One of the best examples that stadia don't necessarily lead to neighborhood revitalization is the original RFK Stadium in Northeast Washington. Has it revitalized the area around it? No. Could it have? Probably not. To generate additional economic activity, stadia need to be in mixed-use settings, like the Coors Stadium in the Lower Downtown District in Denver, which is connected to the city. A stadium in a sea of residences doesn't offer the spillover benefits and multiplicative effects of a location in other areas. In any case, this demonstrates the primacy and importance of urban design as the guiding principles of successful urban revitalization.

For this reason, I now look more fondly upon the long since dropped idea of Herb Miller's, to build the stadium behind L'Enfant Plaza* with a deck over the SE-SW freeway, while oriented to feathering his pocket, might have been better, by locating the stadium closer to other economic activity, and recapturing the use of the air rights above the freeway, allowing for knitting back the street grid.

If the area around the new stadium can be redeveloped in a way that is mixed use and exciting, comparable to how the area is being developed around the Memphis minor league park, or the Streuver Bros, Eccles, and Rouse project in Nashville, well, maybe something good can happen.

Excitement is what keeps people in town. Think South Street in Philadelphia, not M Street SE as it is today--a newly developing K Street-like office ghetto that is dead after 6 pm. (Really earlier since the government-supporting contractors get to work early and leave early, just like Federal workers.)

Speaking of Philadelphia, that city blew it by locating their new stadia away from the urban core. Without building a mixed use core along the waterfront, DC could be making the same mistake.

As Inga Saffron wrote in the Philadelphia Inquirer, about Citizens Bank Stadium, "Because of its isolated location, it must become a closed system, attempting to gratify all food and entertainment needs on its 21-acre site. So there is no reason to leave the premises, except to get in your car and drive home. Unlike downtown ballparks in other cities, there is little potential for economic spinoff (beyond possible increased tax revenues) to show for the city's $200 million investment in the project."

She compared this choice to the urban design and economic impact of the Philadelphia Museum of Art: "In 2004, the city's interest payment on the ballpark financing will be roughly $9 million. That's three times the $2.4 million that Mayor Street plans to cut from the Philadelphia Museum of Art, an entity that attracts patrons to the city's restaurants, shops and hotels."

Is DC moving down a similar path?

Perhaps, according to the Washington Business Journal. This editorial, "Sporting chance: Let's get fans out to the ballgame, and keep them, at least for a while, spending money in Southeast D.C.," summarizes the problem:

"The challenge before D.C. officials is as daunting as any bases-loaded-in-the-bottom-of-the-ninth scenario: How to entice baseball fans to hang around in a desolate quadrant of the city before and after the game. How to get people to take public transportation to the game and not just jump in and out of their cars and head right back beyond the city limits. And how to do all that without spending a lot more money than the hundreds of millions already."

The editorial makes the point that DC Officials are:

"planning to win the game by not preparing too well for the game. Specifically, what they won't be doing is helping fans in and out of the neighborhood too quickly. To slow them down, Metro and economic development officials likely will scale back a plan to enhance the Navy Yard Metro station, the closest to the proposed Washington Nationals' ballpark. Instead of an initially envisioned $47 million expansion, the station now will get about a $19 million spiffing up. New escalators and fare gates are still part of the plan, but so are huge lines in and out of the ballpark.

'We're trying to balance the desire to move people in and out with the idea that we want people out on the street,' D.C. economic development official Steve Green tells Staff Reporter Tim Lemke. " (See the original article "Revised ballpark Metro plan may hit fans' wallets.")

The solution is to make the area great, grand and exciting, while simultaneously offering stellar public transportation options for getting to and from the Stadium. Who wants to stay in an area longer and spend more money out of aggravation?

How does making it impossible to get around efficiently make people think positively either about Washington, DC or the WMATA system? Making public transit the last choice instead of the first choice makes no sense whatsoever.

People's desire for efficiency in transit means that either they won't come or they will use modes other than public transportation--meaning that they will drive their cars leading to gridlock**. Making Metro worse is hardly the best way to promote wider use of public transportation. (**Dr. Transit looks upon some congestion as a sign of urban vitality, but fomenting gridlock as economic development is a strategem, not a strategy, that in any case is likely to fail.)

The Bizjournals editorial concludes: "Besides, the real challenge remains: Getting the neighborhood whipped into shape to become a place where fans and tourists will want to spend some time. Baltimore has the Inner Harbor. Chicago has Addison Road. Even Cleveland gets fans to its Public Square. With a little team spirit -- and a decent plan for the neighborhood -- D.C. should be able to do the same. "