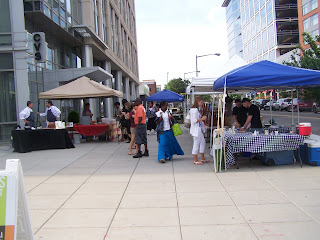 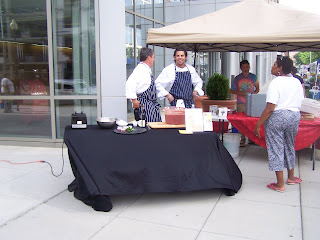 Images from the NoMA Farmers Market.

Professionalism in marketing exists as a principle regardless of the size of an organization. Your marketing approach and plan and execution is either well done or it isn't. And it's not about money either (well some money). You don't need millions of dollars to do excellent marketing, but it does cost money...

I complained last night at an Eastern Market meeting about the continued failure to have a decent marketing plan and program. (The city has retained a firm and a kind of planning process is underway, although thus far I am pretty unimpressed.)

I made this point and one of the merchants commented (as he does frequently) "we aren't [a big market] like Lexington Market [in Baltimore] or Pike Place [in Seattle]."

It's not about size, it's about vision, mission, and demand for excellence.

There's no excuse for an organization that has been in business for 100+ years to not have a directory, branded materials like a shopping bag, directory, postcards (FreshFARM Markets has a series of well done postcards for each of their markets), etc., and coordinated marketing plan with programming, advertising, and other media promotion.

And that should be recognized and addressed, rather than excused.

Last week, I went to the "new" Farmers Market, Wednesday evenings in NoMA. I bought some amazing lamb sausage which I used with vegetables in a pasta dish. And a chef from Vidalia Restaurant was there, with a sample and recipe for Watermelon Gazpacho. I liked it so I made it the next day...

A few weeks ago, I was in Bethesda on a Sunday--I thought I wrote about it, but I guess not--and they have a farmers market there now called Bethesda Central Market. From the standpoint of Eastern Market, I was left very "chilled"--the Bethesda version was well organized down to the variety and quality of the vendors, and the add on type of merchandisers (e.g., high quality cooking pots) also present. This market, and the other retail and restaurant and entertainment options at the adjacent Bethesda Row mean that people in that area have very little reason to come down to Eastern Market/Capitol Hill on a Sunday...

It's a shame that the various farmers market promotion organizations (either nonprofit or for profit) doing markets in the DC region do a 10x better job than Eastern Market.

The food marketing landscape isn't static, it's very dynamic. And after awhile, expecting patronage based solely on your age isn't enough. Ask A&P, one of the nation's oldest supermarket chains, which continues to shrink, is in and out of bankruptcy, and has just sold off or closed all but 2 of its remaining stores in DC, Maryland, and Virginia.

The issue is about maintaining relevance and providing excellence.