The other day the Washington Post ran a story ("A D.C. nonprofit is bringing healthier options to neighborhood corner stores") about a program in DC called Healthy Corners, where small corner stores in DC's low income neighborhoods have a special food distribution system initiated and operated by DC Central Kitchen, a nonprofit focused on food service training, which provides healthy foods (produce) in stores and communities that otherwise have limited access to such foods.

In the past I've written about business cooperatives which support small and independent businesses, such as grocery cooperatives like Wakefern or Associated Food Stores, or for pet supplies, electronics, bicycles, etc.

The basic point is that if you want to support small business or atypical initiatives ("community capitalism") in the context of a business system that supports chains and/or "bigness" you need alternative and structural approaches and structured systems in order to do so.

The Healthy Corners program is a good example. (A couple of similar programs operate elsewhere across the country, such as in New Jersey, Delaware, and Pennsylvania, spurred by The Food Trust.) 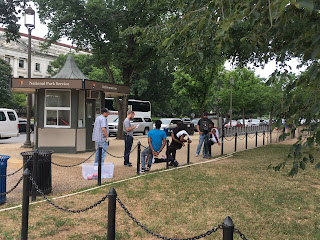 Of course, when the kids were arrested in DC there was public outcry, but no substantive discussion of why the kids were stopped from selling and definitely no discussion about how to "change the system."

I think it was in the book Grocery, about the supermarket business, where the author Michael Ruhlman tells the story of getting the bright idea to sell soda along the fairways of a local golf course--he got shooed away by staff, but realized he'd do better in a better location, and even better if he could sell beer, because that was what the players really wanted to buy.

When I was a child in Detroit (8-9 years old), I lived by a public golf course (Chalmers) and we would go buy soda at the local supermarket (Great Scott) and ice it down and sell it through the fences. We didn't have to worry about police.

This is the lemonade stand kind of issue ("Lemonade Stands Are Illegal In Most Of The United States," Delish), where unlicensed vendors are not able to sell products on government-controlled properties.  In food sales, "cottage food production" laws have made the sale of home-produced foods legal in many instances ("When Does a Cottage Food Law Become a House Food Law," Food Safety News).

But generally such laws haven't addressed access to places to sell such products.

The problem with that is that governments aren't mentally situated to support microbusinesses-microvendors. They are accustomed to dealing with countervailing parties that are also large.

While there are many examples across the country, San Francisco's La Cocina is a commercial kitchen social enterprise developed to train people of color in food service and food production, not only providing access to equipment, refrigerators and freezers, etc., but also business training ("Taste the Legacy of La Cocina in San Francisco," SF Travel). 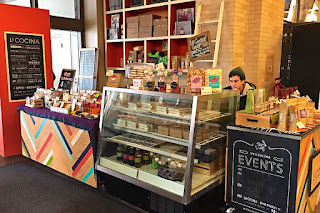 Image from the Out of Bounds blog.

They also have a store, selling products produced by the various participants, at the Ferry Building (well, I guess they've closed it, and just have a booth at the Saturday outdoor farmers market).

Some farmers markets make it possible for local "gardeners" to sell produce they've grown, and some public markets set up some stands for ad hoc assignment, as opposed to be permanently assigned, to allow for variety and experimentation.

Working with vendor organizations, like the Street Vendor Project mentioned in the NYT article, it would be easier to develop such a system for food vendors and even kids selling water, in certain places on public property, as a way to foster smallness instead of bigness in business, entrepreneurialism, microenterprise, and community capitalism.