"In spite of the need to move urban traffic, many urban highway programs have been stalemated for one reason or another. In Washington, DC there has been an effective, organized citywide drive to curtail highway construction. The Washington program includes an Inner Loop Freeway which would serve the purpose of bypassing through automobile traffic and permit the citizens who live in the outlying areas to have greater accessiblity to the downtown area.

The opponents of this program have succeeded in persuading Congress to hold in abeyance the necessary appropriations until a study regarding the need for a subway and rapid rail transit system is completed.

Such a program for Washington, DC, is obviously not feasible from an economic point of view and would serve no useful purpose. Metropolitan Washington is a 'lateral' area. As a result, there is little, if any, heavy concentration of people in a given suburban area. If they were to use such a rapid transit system they would be requited to drive considerable distances to the pick-up stations... states that motorists would continue to shun public transit if they were paid to ride it."


(Underlining added. The second underline is merely to point out that putting transit stations in the middle of freeways doesn't work as a way to generate high ridership. The original plan for the subway system in the Washington region was for the transit lines to be placed in between freeways, comparable to how the orange line pops out on I-66. This was true for many of the stations proposed in upper NE and NW Washington as well.)

Ironically, this editorial was published about 7 months after the streetcar system was abandoned as a result of an order by Congress, in legislation passed in the 1950s.

I raise this because of my ongoing concern that "rails to trails" programs end up creating constituencies that favor trails over transit. From the overall maximum benefit standpoint, this often makes sense.

This comes up because of the letters, "A Purple Line in Harmony With the Hiker-Biker Trail" in today's Post in response to Marc Fisher's recent columns on the Purple Line ("A Little Give and Take Is Called for in Debate Over Purple Line Route" and "As Purple Line Creeps Closer, Hard Choices Loom") which make the point that both sides have decent points but that it makes the most sense to opt for the choice that produces the greatest amount of good. 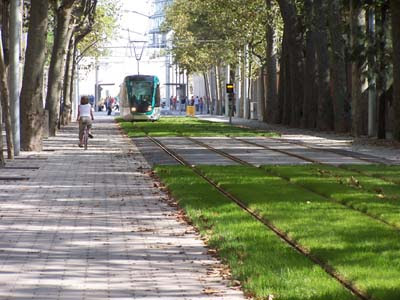 I think my bicycling advocacy credibility is pretty good, but I think it's wrong for trail advocates to deny the primacy of light rail (which was why the railroad right of way was purchased to begin with) in this instance.