Daypart and age-group planning in mixed use (commercial) districts 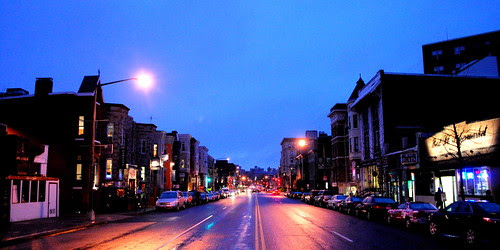 Looking West on U Street by M.V. Jantzen. Flickr photo.

In a restaurant, the dayparts are pretty clear, even if a restaurant isn't open during all of the time periods:

In some of the reports that I have worked on for communities, I have begun applying this idea to commercial districts, although the concept needs some fine tuning still.

The basic point is that the retail and attraction mix should be planned specifically to drive activity throughout the day and into the evening hours (when the latter is desirable).

Basically, there are three main time blocks for planning:

There is a bunch of interesting work out there (including academic work such as Nightlife and Crime: Social Order and Governance in International Perspective) on the Night-time economy.

The Responsible Hospitality Institute is one of the organizations that has been leading the way on this in the U.S. See "What is Your Role in the Nighttime Economy? Well planned & managed nightlife can offer many benefits to your city.

The other concept, which is pretty straightforward, but seems to be overlooked by planners quite a bit, is planning the retail, attraction mix and set of services by household type and age group, in terms of equity sure, but also just to be sure you're not missing anything. This may require systematic oversampling techniques, focus groups, etc., in order to cover the issues comprehensively, according to the interests and needs of specific types of household and/or demographic groups.

An easy example is looking at the question of how accommodating are businesses and the commercial district of the special mobility needs of people with children/strollers or older people. Do restrooms have changing tables? Can you offer special programs at different times of day to better activate your streets and businesses, but also meet the needs of different groups. Are the sidewalks smooth, and with curb cuts at intersections for strollers and wheelchairs? Etc.

One example would be a weekday film matinee for people with children. The children can run around and be noisy, and not get in the way of patrons who are less inclined to enjoy the antics of children when they are trying to watch a movie. Etc.
---------------
I bring this up in the context of the story on U Street in today's Washington Post, "Residents of Washington's U Street Corridor Tired of Area's Growing Noise."

When I went on a tour of the Warehouse District in Cleveland in 2002, at the National Trust for Historic Preservation's annual conference, it was sort of off-handedly mentioned that people tend to move out of the area once they hit 35 years old, because their household composition changes and their willingness to put up with noise changes as well.

It happens that when I lived in Ann Arbor after college, I was fine with living in a part of the "student ghetto" even though I was no longer a student. (In the area between State, Hill, Hoover, and South Division Streets, at least back then, there were a goodly number of houses, at least 20% that were not student housing.) My housemate hated it, and he ended up moving out of the city.

I probably wouldn't mind the noise if I lived in the U Street neighborhood, but I know my girlfriend would hate it. (Similarly, I hate it when residents who choose to move in houses immediately abutting commercial districts then complain about the commercial activity of the businesses. I want to ask them, why did you choose to live where you did, if you knew that the proximity to business activity would bother you?)

The process of a regular pattern of age-based housing succession within the U Street neighborhood is likely just beginning, because the night-time economy there is only really starting to gel, and it has only been a few years since condominium housing has been significantly added to the mix. I guess that this makes it news and therefore worthy of a newspaper story, but the process is nothing new.

The irony is that what attracts people to the U Street corridor to live -- the activity -- ends up being the same factor that compels many of the same people to leave the neighborhood as they get older and their interests, activities and household composition changes.

Although, for ideas for how families can live in condominiums, see this entry, "Urban families after the great reset" from All About Cities and this blog entry from 2006, also about Vancouver, "High density family living in Vancouver, British Columbia."

(Note that when you are looking to buy a house, speaking of "daypart analysis," I recommend that you visit the neighborhood and block at different times of day and different days of the week, to be sure that you have a good sense of the ebb and flow of neighborhood life, and whether or not you're down with that flow, because it's very hard for you, by yourself, to change how the neighborhood already is.) A photo of partying in the Warehouse District in Minneapolis. I imagine as you get older, table dancing becomes less of an attraction...