Bicyclists as the other (continued)

I've written about this before. Washcycle has a good entry, "Getting Along," about the driver vs. bicyclist debate. I really like this quote:

Dave Schlabowske, Milwaukee’s bicycle and pedestrian coordinator, says he’s done plenty of traffic studies that show that at least 60 percent of the cars on the road at any given time are speeding. When it comes to stopping for pedestrians at crosswalks, 90 percent don’t.

“But they see this bicyclist roll up to a red light and then just roll through it, to them it seems so obvious and so egregious,” he says. “But they never think, ‘Well, I was just breaking the law for the last eight miles.’ They’re not thinking about their own behavior.”

One of the things that was taken out of the draft of the Western Baltimore County pedestrian and bicycle access plan was my poking in the eye the people who complain about trails as promoting crime. 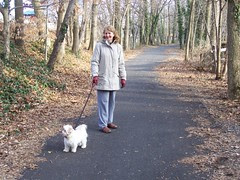 (This report from the Institute for Public Administration of the College of Human Services, Education & Public Policy at the University of Delaware is really really good, and has an excellent literature review, including coverage of crime and safety issues on shared use paths: Sidewalks and Shared Use Paths: Safety, Security, and Maintenance.)

But I took this further. I said the reality is that more crimes are committed in association with the use of automobiles than with bicycles, but that people do not respond by recommending that the entire street network be shut down, automobiles be banned, or that no new streets should be constructed, because the street network abets crime.

This is the flip side of the point that Dave Schlabowske made above, about how automobile drivers tend to break the laws a majority of the time while driving (speeding, running stops, running red lights, entering the crosswalk when pedestrians are present, failing to yield right of way), but they don't consider this lawbreaking.

I even quoted the local police chief as confirming the link between automobiles and crime.

In 2009, Baltimore County became one of seven agencies nationally to begin using a program called Data Driven Approaches to Crime and Traffic Safety — known as DDACTS — to help deploy officers to targeted areas, in an effort to cut down on car crashes and crime.

The theory behind the program is that by mapping crashes, police can learn which areas are most likely to have such problems and station their officers in a “highly visible” way to deter speeding and distracted driving.

The same is also done in high-crime areas, police said. One helps the other, Baltimore County Police Chief James Johnson said, because vehicles are often used in the commission of crimes.

Still, that text was excised. Not that I didn't expect it. But it felt good to write it.

Rails to Trails Conservancy publishes a magazine distributed to members, and last year, they published a great article, "The Real Deal: Maryland's B&A Trail" about the Baltimore and Annapolis Trail in Anne Arundel County, and the positive impact of the trail, but also the story of the trail, and the opposition to the trail that was experienced initially.

In the Washington-Baltimore region, this trail is considered by planners to be one of the best examples of how the creation of trails improves and strengthens communities, extends the quality of life and placemaking qualities, reduces crime, and contributes to local economic development objectives.

Typically, after trails are constructed and begin to be used, opposition dwindles. So why do we have to go through the contentious processes each time we try to create new trails? 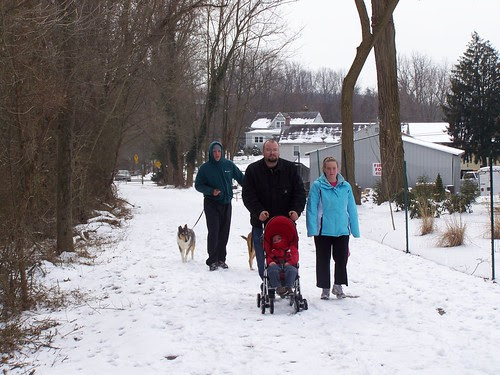 People on the Catonsville #9 Trail in Winter. I don't think they are criminals. For more on this trail, also see this article, "Input sought on safer bicycle, walking paths in western county: Planner says he would like to see residents make walking, bicycling a 'way of life'," from the Catonsville Times, and the story of the trail as recounted by Kit Valentine.