A 23-part investigative series from Carnegie-Knight News21/Center for Public Integrity looks at transportation safety in the US.

The problem with the series is that it only focuses on the National Transportation Safety Board and its issues--the NTSB makes recommendations but lacks the authority to require that the recommendations be carried out. 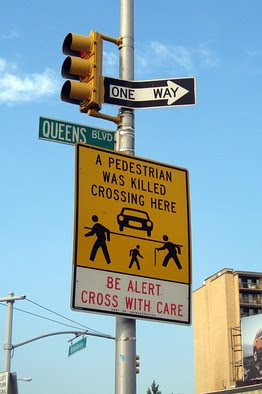 So systematic and systemic failures in dealing with pedestrian and bicycle related accidents, such as weak accident investigation procedures on the part of most local police departments, where police officers, perhaps without intending to do so, tend to favor the motor vehicle when investigating, and gaps in the law that favor motor vehicle drivers at the expense of pedestrians and bicyclists, remain unaddressed.

The regional bicycle blog Washcycle provides consistent coverage on bicycle accidents--some of which involve bicyclist error, but many of which involve driver inattention, and laws are pretty easy on automobile drivers when it comes to negligence. And recently, the Greater Greater Washington blog, also in the Washington region, has provided weekly coverage of pedestrian and bicycle accidents in DC. See the latest posting, "Struck in DC this week: 13 pedestrians, 6 cyclists."

There is no equivalent of the NTSB advocating for fairer treatment and greater concern when it comes to pedestrians and bicyclists.

In the Netherlands and other European countries, drivers of motor vehicles are required to take on much more responsibility for accidents involving pedestrians and bicyclists, because motor vehicles are much more powerful and able to cause harm. In those countries defenses such as "I didn't see the bicyclist" or "I thought I hit a deer" don't cut it. Instead, the motor vehicle/driver is automatically presumed to be at fault.

Because of the serious consequences that can result, drivers take far more care while driving in Europe, in contrast to how the system of highway safety and fatalities in the U.S. takes negligence for granted. See the 2001 article by Malcolm Gladwell, "Wrong Turn: How the fight to make America's ways safer went off course." from the New Yorker.