The Post has an article, "Developers of Dupont Underground are far from the light at the end of the tunnel," about a proposal to create an art experience in Dupont Circle, but underground, in the trolley underpass along Massachusetts Avenue under the circle. It's interesting, but I won't hold my breath about the end project being successful. From the article:

District officials and developers are now moving ahead with new plans to convert tunnels beneath Dupont Circle into art galleries and possibly a restaurant and a winery, akin to several subterranean public parks and retail spaces in Manhattan and France. But officials and artists are skeptical about whether tenants will flock to a space so hidden and removed from the heavily trafficked Connecticut Avenue NW corridor.

"It's dicey," said Robin Diener, president of the Dupont Circle Citizens Association. "The businesses at Dupont have been promoting the outdoors and events at the circle for years and this is really unproven stuff."

The Arts Coalition for Dupont Underground, a nonprofit made up of artists, businesses and developers, recently released some of its initial plans for nearly 100,000 square feet of space beneath Dupont Circle and are awaiting the go-ahead from the city to begin lease negotiations, officials said.

First and foremost, people come to consume the retail and entertainment experience in the city because it's outside and on the street. That's a big part of why a previous venture in the same space opened in the mid-1990s, "Dupont Down Under" failed.

Underground restaurants and interior shopping malls--such as Georgetown Park in Georgetown--tend to fail as a result. (The stores that are successful in Georgetown Park abut M Street and for the most part have entrances directly onto M Street. Interior stores struggle.)

Second, not to mention the issue of do people in DC really buy art or just entertainment when they go out? (See these articles from past editions of the Post, "Zenith Gallery Is Shutting Its Doors" and "Other 14th Street NW Galleries Could Close in Wake of G Fine Art".)

Third, that being said, if an experience is particularly well-run or exciting, such as Buffalo Billiards at Dupont Circle--which took a marginal space that had been vacant for many years after the nighttime establishment that had been there was closed down after a shooting and made it very successful--it can succeed in what would otherwise be a nonstarter. Another place that succeeded for a long time was a club, maybe it was called the underground, at 21st and M Streets, which, yes, was underground. IT probably was closed due to problems with crime or the neighbors, but seemed to be successful as a business.

So it can be done. Providing the management and execution of the experience is stellar. 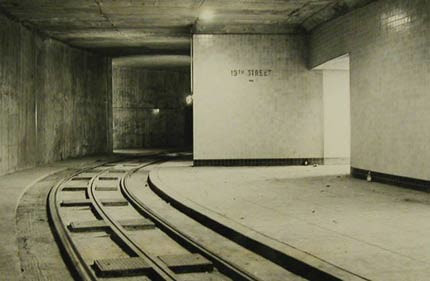