Montgomery County's real jobs problem is that it is an adjunct, not a full-fledged, member of the military-industrial complex

In the past I have discussed University of Minnesota professor Ann Markusen's earlier work, The Rise of the Gunbelt: The Military Remapping of Industrial America, assessing the impact of military spending on local economic development.  The book makes the point that much of the "Sunbelt's" prosperity has been driven by military spending.

Of course, the Washington, DC Metropolitan Area, home of the federal government, benefits significantly from federal spending in many ways, and it both boosts and insulates the local economy.  While much of the region's economic activity is federally-based, the type of activity varies in terms of how it may aid the development of new businesses and contractors.

One can argue that the book needs some updating in terms of how military contractors spread the work around most Congressional districts, to ensure continued funding, but also how the increased digitalization of military activity has shifted impact to software and related functions.

For example the Washington Post series on the rise of the homeland security function ("Top Secret America") outlines how the rise of the National Security State in the post-9/11 environment has significantly benefited the DC region, and more IT-related military contractors (like SAIC) are relocating their headequarters to Northern Virginia to be closer to their clients. 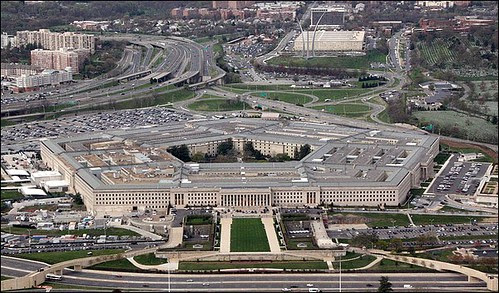 Photo of the Pentagon by James Thresher of the Washington Post.

In the region, Northern Virginia, because it is the location of the Department of Defense, has traditionally benefited from military-related spending, on units of the DOD, on technology and other contractors serving the DOD, and in telecommunications.  Many of these firms are located in Fairfax and Prince William Counties.

Montgomery County is home to the National Institutes of Health, which both funds independent research and conducts research, the National Institute for Standards and Technology, and the Food and Drug Administration, and when the US Government was more involved in satellite communications, having the headquarters of Comsat helped to make the county strong in certain satellite communications activities.

Aerial of the NIH from the NIH Library Flickr collection.

While there are medical and pharmaceutical related companies based in the MoCo area, the region just hasn't been able to hold its own against San Diego and San Francisco in terms of retaining biomedical related companies and in significantly developing the cluster (see "Human Genome Sciences' sale to GlaxoSmithKline: What it means for the D.C. area" from the Washington Business Journal).

And because FDA is regulatory not so much a research-initiating organization, not adding to knowledge in the same way that research at NIH can lead to new economic activity, it doesn't have the kind of business-building impact that other agencies can have.

In short, while Montgomery County laments that Fairfax County "is more successful" in generating jobs ("Study compares Fairfax, Montgomery by the numbers:Report requested by Leventhal is a ‘tale of two great counties,' Floreen says" from a 2010 issue of the Gazette) and in today's Examiner, "Montgomery lawmaker laments county's sluggish job growth," I don't think that it's necessarily because Fairfax County is a better place to do business or because their policies are so much better than Montgomery County's as much as the county benefits from the clustering benefits (agglomeration economies) resulting from being on the same side of the Potomac River as the Pentagon. 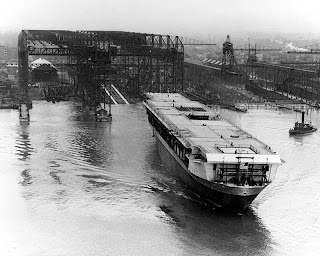 On 26 September 1931, the keel of USS Ranger (CV 4) was laid at Newport News, VA. Ranger was the first U.S. Navy ship designed and constructed as an aircraft carrier. This image shows the launching of Ranger at the Newport News Ship Building and Dry Dock Company on 25 February 1933. National Archives image 80-G-1007392.

As the U.S. military budget contracts over the next decade, this will have disproportionate negative impact on Virginia, Northern Virginia, and Fairfax and Prince Williams Counties, and less negative impact on Montgomery County, although Lockheed Martin's headquarters personnel won't be happy.

It might even be that Maryland military installations at Fort Meade, Fort Detrick, Patuxent, and the Aberdeen Proving Grounds will be less impacted, because of the nature of their "business activity" being more in keeping with the change of the military force structure (unlike say Hampton Roads, which has lots of in-service ships based there).

Rather than focus on comparisons with Fairfax County so much, Montgomery County needs to focus on reshaping its economic environment for a changing future, aiming to benefit more than it does from federal government-related economic activity (as the so-called "Science City" plan aims to do, see "Montgomery council gives the go-ahead to 'science city' plan" and "Science city plan deepens rift between east, west Montgomery" from the Washington Post), while also expanding and extending the breadth of business activity in the county beyond being focused and dependent on the federal government.

This is all very true, and the various Intelligence community components seem to be on the Virginia side (with the major major exception of Ft. Meade).

Serving military, contacters, IC members, what not also seem to prefer living in Virginia, and because of hazard pay are now making some very large salaries.

So a double whammy. Ft. Meade is getting a lot of cybersecurity dollars, but not sure how large that stream really is in terms of local salaries.