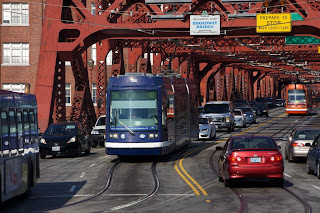 1.  In September, Portland expanded their streetcar system east of the Willamette River.  See "Portland Streetcar's eastside loop gets off to hobbled start Saturday" from the Portland Oregonian.  Some of the commentary criticizes streetcars because on an end-to-end basis, the service is slow.


On the other hand, streetcars, as opposed to light rail, provide much more service on a sub-district or sector level, as opposed to service over long distances.  From the article:

The 3.3-mile eastside line will get off to a hobbled start. City and TriMet budget cuts mean the service will be less frequent than originally promised. Clackamas-based United Streetcar remains months behind in delivering new trolleys. Meanwhile, after years of growth, ridership on the existing four-mile westside streetcar line is sliding.

In the fiscal year that ended July 1, when riding much of the westside line was still free, boardings declined 261,643 to 3.56 million, or 7 percent, compared to the year before.

"There's no question that we're opening with some struggles," said Rick Gustafson, president of Portland Streetcar Inc., the nonprofit that runs the city-owned system. Then, regaining his composure as a true believer, he said the transit loop will not only move people but revitalize inner-city urban development west and east of the Willamette River.

2.  Virginia Beach's non-binding referendum on whether or not to join into the Tide Light Rail system already running in Norfolk is next month.  See "Survey: Light rail riders back Va. Beach expansion ," "Much has changed for light rail since '99 referendum," and "Va. Beach pulls video about light-rail referendum" from the Norfolk Virginian-Pilot and the program website, Virginia Beach Transit Extension Study | Hampton Roads Transit.

As I have written before, it's interesting that public employees unions have come out against the program, because they see it as competing for scarce dollars for which the unions would prefer to be going to salary increases.

3.  Las Vegas' monorail system has exited bankruptcy.  See "Monorail in the black, but it needs an image boost" from VegasInc.  From the article:

Transportation is a big piece of how people come to view an experience. Whether it’s Rome, Paris, New York or Las Vegas, if you can’t get to what you want to see and do, you’re going to remember that. Las Vegas is in competition with everybody to create a value proposition that gives people a good experience when they come here. If we don’t address transportation problems in a pretty significant way, that’s when we fall behind. Our role is to be part of that bigger solution. 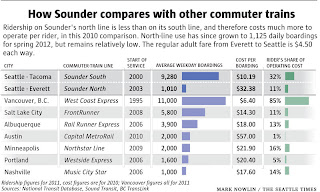 This Seattle Times graphic is great in that it compares ridership and costs among commuter rail services in other communities. One of my biggest complaints about reporting on transit ridership is that comparative and/or actual data is rarely provided. (Too frequently data provided is about percentage increase or decrease, without providing the base numbers.)

5.  While the data doesn't drill down to individual lines (if a city has more than one), the American Public Transportation Association does provide ridership data on various transit modes for transit service providers across the country.


6.  It turns out that Sound Transit has an independent 15-member panel, the Citizen Oversight Panel, comprised "of citizen volunteers appointed by Sound Transit's Board to monitor and report on Sound Transit performance in delivering on the commitments it made in Sound Move, ­the 10-Year Regional Transit System Plan approved by the region's voters in November 1996."

7.  Who would have ever thought that streetcar service would be opposed in Arlington County, Virginia, as ArCo is touted, justifiably, as having one of the most sustainable and forward thinking transportation programs in the US.  See "Arlington County Board election focuses on streetcar debate" from the Washington Post. 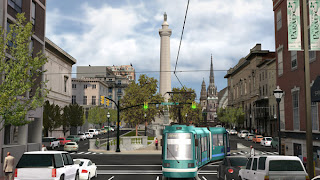 Right: An artist's rendering of the proposed streetcar for the Charles Street corridor in Baltimore.

8.  Meanwhile another community also touted for its wide-ranging sustainable transportation program, Tempe, Arizona, continues to plan for the addition of a streetcar, participates in the Valley Transit light rail and metropolitan bus services, and continues to provide--although with cutbacks--local bus services.  Traffic calming programs have been suspended due to budget cutbacks there.  See "Potholes first sign of Tempe streetcar progress" from The State Press.

9.  A streetcar will become operational next year in Salt Lake City, and in Cincinnati the streetcar program continues to move forward despite almost continuous opposition.  See "Things get real with the streetcar" from the Cincinnati Enquirer.

Meanwhile, DC's first streetcar may run next year--more than 10 years after streetcar planning first began in the city.  Like in Arlington, as many quarters in the city oppose the program as support it.

10.  And streetcars are back on the agenda for Baltimore as well.  See "Competing visions of mass transit for the Charles St. corridor" and "Baltimore should give streetcars another look" from the Baltimore Sun.  Late last year, the streetcar advocacy group hired a full-time employee, which likely helps to keep the agenda moving forward.  See "Charles Street Trolley hires community activist" from the Sun.

As I have written before, it's interesting that public employees unions have come out against the program, because they see it as competing for scarce dollars for which the unions would prefer to be going to salary increases.

Excellent blog you’ve got here. It’s difficult to find high-quality writing like yours nowadays. I really appreciate individuals like you! Take care!! You can visit my site.
wheel hire