While DC has since replaced its bus shelters in conjunction with a master bus shelter and public space advertising contract with Clear Channel/Adshel, this photo was taken a few months before that contract was signed in 2005.

The image is reasonably reflective of the state of the city's bus shelters at the time.  Some were better, some were worse.

For years I have argued that the quality of the physical elements in the surface transportation network, such as shelters for bus systems, communicates how much we value transit.

The old shelter above communicates that we don't value bus service very much at all.

The other point I make is that bus shelters are the primary marketing touchpoints for transit, for users of the system as well as for non-users, who travel by and around the bus system and its physical manifestations.  The information posted in shelters about bus service markets the service--or not.

You see this attention to the service as a whole and its marketing and branding aspects, in the implementation of bus rapid transit service, where they tend to focus especially on providing modern, attractively designed bus shelters and quality information services ranging from real-time arrival information, wayfinding in the stations, and marketing of the service. 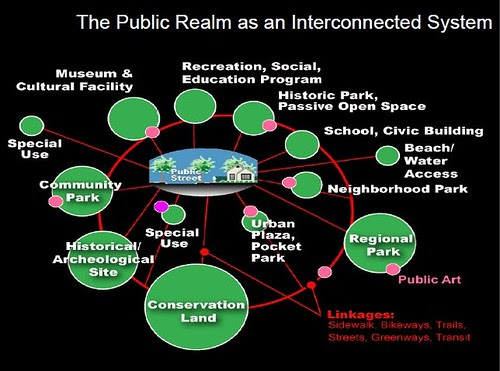 More recently I have extended these arguments about the quality of the physical and wayfinding elements in the transit system, influenced by a concept articulated by David Barth (now of AECOM) which he calls the "integrated public realm framework."

I wrap it up in a package I call "Signature Streets."

Signature Streets as a concept has many influences:

• streetscape improvement projects of all types
• integration of sustainable transportation modes--walking, biking, and transit--into the street network
• commercial district revitalization initiatives (including the County's "Renaissance Communities" program
• Smart Growth principles including Maryland's policy to focus state investment on extant places (called "Priority Funding Areas")
• placemaking and civic engagement concepts put forward by the Project for Public Spaces and others
• Barth's ideas, including another, that streets should be conceptualized as linear parks
• concepts in the Smart Transportation Guidebook (produced by the Delaware Valley Regional Planning Commission) that link to land use concept roadway and roadside characteristics and desired operating speeds
• and because of the need to market and fund the improvements--in most places they need money to acquire right of way and to fund the projects, and they usually do this with bonds--Seattle's Bridging the Gap program, noting also that in most communities, park-related funding initiatives pass at a greater than 90% rate (higher than that for transit).

Signature Streets conceptually provides a way to tie this all up into one neat, marketable package

I first articulated this towards the very end--two weeks before I had to turn in the draft of the since approved Western Baltimore County Pedestrian and Bicycle Access Plan.  I just didn't have enough time to develop the idea because I had to wrap it up--there was no money (that's when counties were going into crush mode financially) to stick around for a bit and fine tune both this idea and the plan.

A couple weeks after the end of that project, I came across a newer presentation by Barth (with Carlos Perex) which confirmed the utility and value of the basic idea.  (I have been familiar with Barth's work for awhile, having seen him present at the APA meeting in DC in 2004.)

I did a write up in this blog entry, "Step up and vision an interconnected public realm." 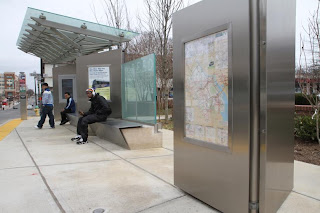 So I find it ironic and interesting and sadly, not surprising, that Arlington County is getting a lot of pushback on its new bus shelter program.  Image left from Arlington Now.

ArCo has just rolled out a "super bus shelter" on Columbia Pike.  See "Cost of New Bus Stop: $1 Million" from Arlington Now and "$1 million bus stop in Arlington" (news article) and "The $1 million bus stop" (opinion) from the Washington Post.

The various writing focuses on the cost, and yes $1 million does seem a lot--but I have to say that I don't know what the average cost has been in other systems such as in Cleveland and Boston's bus rapid transit program, and Minneapolis' bus shelter program (they have enclosed stations in some places, to deal with wintry weather), among others--but misses the point, which should be:

(1) transit riders deserve high quality amenities and infrastructure too, such shouldn't be the exclusive province of motor vehicle operators;

(2) transit shelters are an integral element of an integrated public realm framework;

---------
Note though that my experience is that using stainless steel costs as much as 3X the cost of regular steel in transportation infrastructure like bike racks, I haven't priced bus shelters.  (X + 2X = 3X)  This likely accounts for the relatively high price of the new bus stop and shelter infrastructure in Arlington.

Stainless steel structures last much longer and require minimal maintenance too.  But I don't know how much longer or have cost estimates for "how much less maintenance."
---------

With regard to bus service specifically, this blog entry "Better bus (rapid transit) service revisited" covers most of the bases, which seems to not be a part of the discussion at all.  This blog entry from the Virginia Transit Association has images of BRT bus shelters in Cleveland and Eugene, Oregon. 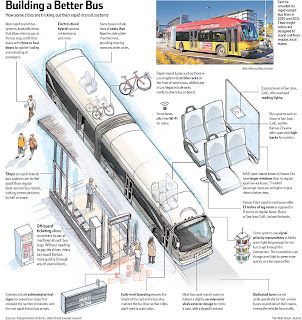 Left: graphic from the WSJ article, "The Commute of the Future" on the amenities associated with the implementation of high quality bus rapid transit services.

Plus there is the EMBARQ: The World Resources Institute Center for Sustainable Transport report on transit (bus) marketing, which is very good as well, From Here to There: A creative guide to making public transport the way to go.

Not to mention Arlington's creation of an enhanced bus waiting station in Shirlington a few years ago.

But it does raise once again the necessity of packaging public services in what I call the "Action Planning" framework (discussed in this blog entry, "All the talk of e-government, digital government, and open source government is really about employing the design method"), to increase the likelihood of success and to reduce opposition... and how integrated concepts like "Signature Streets" are important on many dimensions.

Arlington needs to package all of their various initiatives to improve surface transit service into one neat bundle (including improvements to WMATA stations in Arlington that the county and state has paid for).

The Signature Streets concept is one way to lay it out.

If the new stops were in fact worth the money, I would agree with you. But the functionality is lacking. The roof is too high and the walls too open to adequately protect riders from the weather. The screens would be great - if they worked. But the old stop has walls all the way to the roof - no holes to admit rain and wind. The old stop may not have screens, but it has a paper schedule in plastic - if ART and METRO will keep that schedule up to date, it never breaks down.

Agreed. Maybe not about the real time info, but agree about the issue of shelters that really provide shelter from the elements vs. not.

Plus, metal benches get hot in this region in the summer.

This is an excellent blog.
BuyingEDDrugsOnline.