Will carriage houses destroy city life as we know it?

Last Friday's (8/9/2013) Express/The Washington Post's "Ready to Rent" section featured the carriage house as a desirable place to live. See "Your Own Private Hideaway."  I haven't figured out where they have this online, but you can find the article by downloading the issue from the Read Express website.

So I guess the Post believes that the city won't be destroyed by carriage houses.

In DC's zoning update process (see the past blog entries "A good chance the DC Zoning Rewrite will crash and burn: Part 1" and "DC as a suburban agenda dominated city"), one of the elements that has unglued many residents of the suburban intra-city is the possibility of expanding the ability to have accessory dwelling units or legal apartments within larger dwellings.

In all the hullaballoo about "alley dwellings" and "accessory dwelling units" the Office of Planning has backed off their original more expansive proposals, and propose to allow either a separate unit on the lot or an in-building apartment, but not both. 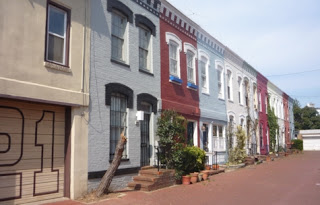 Image of Gessford Court SE from The Hill is Home blog.

The city has a long history with alley dwellings, which for more than 100 years, were used to hide and house poor people.

Even so, pockets of alley housing ("D.C.'s Gessford Court is a little alley oasis" from the Post) re-branded as "Courts" and individual carriage houses ("Alley Homes Fight for Respect -- and Trash Pickup," Post) remained on Capitol Hill especially, but can also be found in Greater Dupont Circle and Georgetown, and here and there across the city.

James Borchert's Alley Life in Washington: Family, Community, Religion, and Folklife in the City, 1850-1970 is the definitive book on the history of this type of housing unit in the city, at least preceding the last 40 years.

Right: This little girl, 5 years older than when this picture was taken, lives in a renovated carriage house located immediately behind the commercial buildings on H Street NE.  She seems to be fairly well-adjusted--and is even more gorgeous--despite the claims by Upper Northwest DC residents up in arms about "those people" living in alley dwellings.

Currently, ADUs aren't really legal, unless they are used by family members or "domestic servants" or building custodians.

But creative legal minds have figured out that since domestic servant isn't absolutely defined in the zoning code, if "tenants" put out your garbage, that qualifies as a domestic servant.  So in R1 zones--single family houses on for the city, comparatively big lots, ADUs are matter of right.

(Otherwise it's hard to get approval for alley dwelling units.  The current regulations require that the alley be 30 feet wide in different R zones, for housing to be legal--unless grandfathered in.  But arts-based uses, non-living, are legal.)

A lot of the opposition is about "those people," "those people" being different, unruly, and poorer than owners, forgetting the fact that legal ADUs will only be able to be offered if the main house is owner-occupied. It won't be in an owner's best interest to rent to the unwashed, especially if they are sharing the same backyard.

I have written about this a lot.  Basically, I think that ADUs should be preferenced in areas around transit stations especially.  My neighborhood could accommodate hundreds.  ADUs will allow lower priced housing, but also enable another income stream for otherwise increasingly more expensive to acquire properties.

And it will provide a revenue stream for renovating structures that might now be neglected or otherwise nuisances.

The increased price of owner occupied housing is why you see in Canada especially--they don't have a mortgage interest tax deduction like we do in the US--the addition of apartments to "single family houses" and depending on the community, carriage houses/ADUs/laneway houses.  Although this is seen more in cities like Vancouver, BC and Seattle, Washington.

The Pocket Neighborhoods concept, by Ross Chapin (I've mentioned the book before, which is beautifully written and illustrated) is a riff on the idea of laneway housing.

And housing of this type in Salt Lake City, built decades ago, and down the block from Pioneer Park, was pointed out to me.

Being that it is situated behind some apartment buildings, you'd never know it was there, unless your attention is called to it.

The photos of laneway type housing in SLC are below.  The thing is that they are incredibly well located.  (SLC was designed with massively large blocks, 10 acres in size, so "alley type housing" is a good way to use up space on the interior of a block.)

As I mentioned, they are across the street from the city's signature downtown park, and close to upscale groceries, a couple blocks from Downtown, a bicycle sharing station, etc.

In DC, ADUs would allow the surgical increase of affordable housing, in ways that limit demand on infrastructure, and strengthen neighborhood commercial districts, schools, and safety on the interior of blocks. 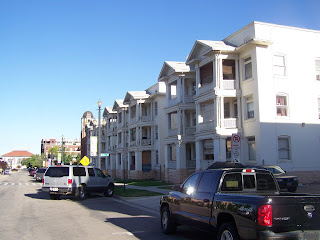 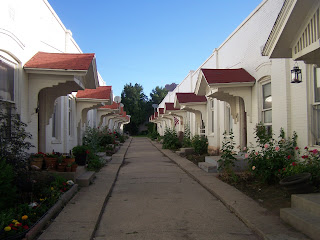 excellent- clearly the axis that makes up the PG county dwelling / DC city employees and the hidebound NIMBY people in DC has screwed over a time tested idea -new alley construction for residential and uses other than parking. Nice to a picture of my home sweet home again !!!

ironically it is often the "historic preservation" authorities that I hear in opposition to more use of alleys for people and not for cars- many of these types are elderly and car-centric and have no use for anyone who cannot afford a 2 million dollar home w/ multiple cars. Their priority is parking and alleys are only for parking. We had to go up against a few of these people to get Gessofrd rebricked- and others actually helped us with the project. The main complaint was "we cant get our cars in and out of our garages" as though their cars were more important than those of us who live in the alley. Now Gessofrd has become a neighborhood mecca and all kinds of people bring their kids in to play there- as it is regarded as a "safe place" to be for families. These people used to shun us and some still look down on us- but it has come a long way. The city needs more alley communities and it could help to transform and improve life in DC as it certainly has here. One day I will write a paper on how this rebricking has transformed Gessford Court from a dreaded place into a celebrated place where everyone wants to be...

I want to read that paper.

not to sound too negative in the comments above- as there was some real support to do this- but a lot of blocking by bureaucrats in the city and others who wanted no change at all. Give me a little time and I will do this. It really is astonishing some people feel about how their "rights" to their cars trump others real personal rights, safety, and property rights. These were mostly street fronting neighbors- and some made a real display of their unhappiness with the re bricking process saying it was a waste of money. It is surprising to how these same people now come to our alley parties and love it.

It is really just the blue hairs in upper NW who are opposed to ADUs. There are alley ADUs on Capitol Hill and Shaw with great support.

The Ward 3 people need to be told to STFU.

I took a photo of a poster on a telephone pole in Capitol Hill, Seattle, about an alley open house.

I want to try to organize one in DC.

not true- the blue hairs and NIMBYs on CH are very strong and loud mouthed jerks who all own 3 cars or more- per household and live next to metro and never use it. This is far more common than many realize. Hines is a case/example. If it was to be a one story parking facility no one would object at all.

Do ADU tenatns have full rights under the landlord-tenant laws?

historic alley houses such as the ones we have in Gessford are completely separate properties - from street fronting homes around them- [even if the people in the street fronting homes act like they are superior to the allley residents]. However- accessory dwellings would fall under another category- more like an "in law suite" type of situation or even a "room mate" category.

charlie -- I would presume so. To be legal, the unit would have to be licensed. And that likely triggers all those various protections.

It would be worth fixing up some of those provisions, to reduce the risk to landlords from "Pacific Heights/Michael Keaton" type of situations.