More thoughts on suburban hipness (it's really about commercial hipness generally, not urban vs. suburban)

In the previous entry, "Millennials and suburban hipness and Montgomery County, Maryland," and the comments, there was discussion about the possibility of creating night life districts/attractive places in the suburbs.  Frankly, I don't think it's all that "difficult" if we can think a little differently about how to go about it.

It would be very useful to compile a wide ranging set of places as examples.  Some of course would be from cities but are still relevant, because the issue is more about the district-neighborhood and building type, and not so much whether the location is in the city or the suburbs or a suburban town.

Here are some that come to mind. 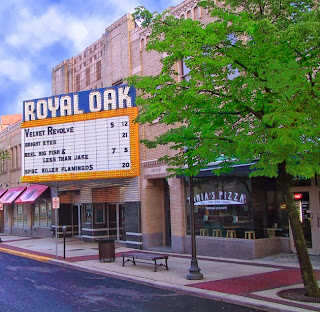 The Royal Oak Theater, now the Royal Oak Music Theater, is a key cultural and entertainment anchor in this Michigan city.  I remember just before I went off to college going there to see a double feature of "Harold and Maude" and "Annie Hall."  At the end of my freshman year, we celebrated there (I lived in the next city over) by going to see the Boomtown Rats.  Photo from City Data.

In the comments we talked about places like Royal Oak and Ferndale in Michigan, which are in Oakland County, along the Woodward Avenue corridor that starts almost at the Detroit River and proceeds more than 20 miles northward, ending in Pontiac.

Royal Oak is a traditional town, with an old "downtown," located about 3 miles north of the Detroit City border.  Oakland County was once one of the nation's wealthiest counties. 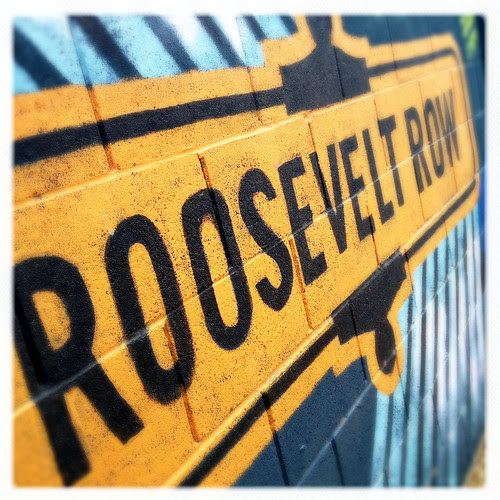 Photo by David Kozlowski on Flickr, via Dallas Photoworks.

I didn't mention the Roosevelt Row Arts District in Phoenix.

Phoenix, obviously is a city, but it's a suburban city, very spread out and deconcentrated.  Roosevelt Row is marked by a variety of building types, but some of the coolest shops were in bungalows.

Also in Phoenix, at the intersection of  Camelback Road and Central Avenue ("Get Your Boutique On: Central and Camelback," Downtown Phoenix Journal), where more recently a light rail station has opened, because of sprawl and the devaluing of many city locations, low rents at some of the shopping centers have attracted cool shops and boutiques--we bought a Fugazi compilation at a record store called Stinkweeds, Suzanne bought some stuff at a boutique, and we bought art stuff at another, Practical Art, because we were staying nearby at the Maricopa Manor Bed & Breakfast (one of the only B&Bs in the city) and these places were a short jaunt.  (The AJ Supermarket in the traditional shopping center across the street was also cool.  It's the upscale banner of the Bashas Supermarket chain.) 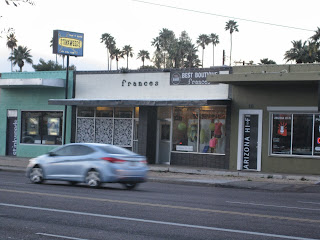 This undistinguished strip shopping center on Camelback Road in Phoenix is home to cool shops and boutiques.  Image from the Drama Queen blog.

Note that the coming of light rail is likely to raise rents and lead to land intensification, and the funky shops will have to move on eventually as the sites are redeveloped.

Other relevant city examples would be the Gordon Square Arts District in Cleveland and the Penn Avenue Arts Initiative in Pittsburgh.  The Station North District in Baltimore City.  Carytown in Richmond.  H Street NE in DC and Clarendon in Arlington County, as discussed in the comments.

There are many others.  If we had to come up with a formula I think it would be something like this:

But creating a fun destination is a bit more complicated.  Not all opportunities can create a district.  The State Theatre in Falls Church, Virginia is really cool--a great place to see a concert--but it is one building, without much else around it.  The same goes for the coffee shop on Delridge Way SW in Seattle.  One great use doesn't make a district, even if its offer is strong enough to survive by itself as a destination of its own. 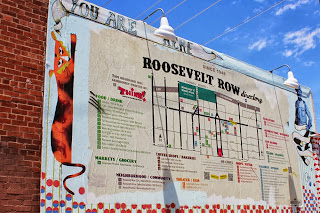 A map of the Roosevelt Row Arts District, painted as a mural.  It also shows the value of a critical mass of establishments.  Image from the Hanger Shortage blog.

You need a place.  That is a concentration of adaptable buildings that are inexpensive to rent.   A group of buildings is key, because one great use, as cool as it might be, isn't enough to make a district.  As much as we push historic buildings, buildings are the envelope and even ugly buildings can be great building blocks, so long as the use is cool.  Ideally the mix of building sizes includes larger buildings, which can serve as anchoring uses such as music clubs and theaters and cinemas.  Anchors draw audiences and share them with taverns, boutiques, galleries, and other uses.  Collectively these elements comprise a destination district.

So the final formula would be more like this:

Finally, three more elements to consider.  One is accessibility, or the means to get to the place.  Transit is a useful element but isn't absolutely necessary.  It helps a lot.  But in places where most people drive as long as you have parking you're ok, probably.  And if your transit options at least initially, are less than stellar, if you have the other elements, people may make due.  H Street NE is a perfect example.

Second is the mix of businesses in terms of whether they are independent businesses or chains.  This is a complicated vector.  A study by the Clue Group found that successful "independent" commercial districts had as much as 20% of its mix being chain stores.  Cool, interesting places tend to be single stores or what we sometimes refer to as "chainlets."

In the DC area, the Matchbox Restaurant Group, the Neighborhood Restaurant Group, and the groups run by Geoff or Jeff Black are examples of chainlets.  The Big Bad Woof pet store in DC now has a branch in Hyattsville, so it qualifies.  So do Yes! Markets and My Organic Market (MOM's) natural foods supermarkets.  The Plan 9 Record Store in Virginia is another (although they have been shrinking).

The third element might be what we call "high art" vs. "popular culture."  The Atlas Performing Arts Center on H Street is an anchor use and helped to redefine the corridor.  But more people go to the taverns and restaurants on the corridor than to the Atlas.

Similarly, while you might think that a children's museum or nature center is a great anchor, the reality is that such establishments mostly attract school children who bring their lunches, and aren't the kind of patrons who then spend money at other establishments in the area.

The key is to get the right retail and entertainment mix, that includes a variety of well run businesses, with interesting and unique concepts and anchors--high and low, commercial and nonprofit--that are designed to be complementary and collectively activate and animate the district throughout the day and into the night. 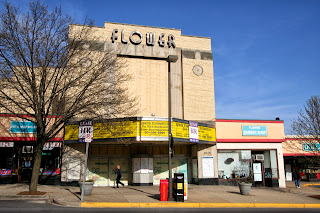 In terms of Montgomery County, Maryland, Long Branch, which has an old theater building that could be a wonderful anchor, and Takoma Crossroads are two places that have the opportunity to become destinations, especially because of the opportunity presented by the coming of the Purple Line light rail.  South Silver Spring and Fenton Street south of Wayne Avenue could be another cool district, as discussed previously.

And I am sure that there are random seemingly marginal shopping centers dotting the county that have the opportunity to support coolness too, based on the Seattle and Phoenix examples.

All part of the great rotation out of retail and into eating/drinking?

(I'm thinking of the Coventry area in cleveland, which has suffered a lot in the last 20 years).

been a long time since I've been to Cleveland, but probably. Hope to get there some time soon. I liked it.

Your point on chainlets - especially local ones - is an interesting one in the context of Takoma Park's commercial districts. New establishments in Old Takoma like Takoma Bistro (Bread and Chocolate), Dolci Gelati, the new Black's restaurant Republic, and upcoming Busboys are all local chainlets. Up at the Takoma-Langley Crossroads the independent and interesting retail/restaurants are mixed with local chainlets of a different variety, including La Chiquita, El Comalito, the new FroZenYo, and upcoming Sardi's Pollo a La Brasa.