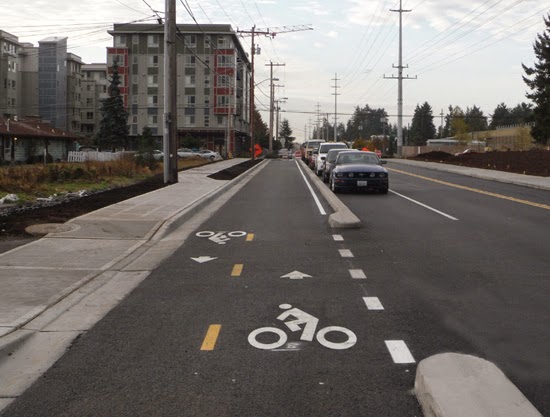 Judging by the comments on bike- and transportation-related articles in the Seattle Times and the failure of biking Mayor Mike McGinn to get re-elected in 2014, I don't fully buy into the narrative ("Mike McGinn: Fighting Bikelash with Seattle’s Former Mayor," Bicycle Story; "How Smart Language Helped End Seattle's Paralyzing Bikelas," Streetsblog) that Seattle has successful changed the language around biking to counter "bikelash"--that is, the opposition to the implementation of mobility infrastructure supporting biking.  (And note that Seattle does some of the best sustainable transportation planning and implementation of any major U.S. city.

Nonetheless, language (framing) is very important, so I find it quite interesting that Tempe, Arizona--which in my opinion has one of the best local transportation programs and departments in the U.S.--doesn't call "traffic studies" traffic studies, but "transportation impact studies."

A traffic study mostly analyzes motor vehicle traffic, and is conducted typically as part of the approval process for land development and building construction.  It studies the likely impact of a new building/cluster of buildings and their use on the roads, with particular attention to "levels of service" at intersections. 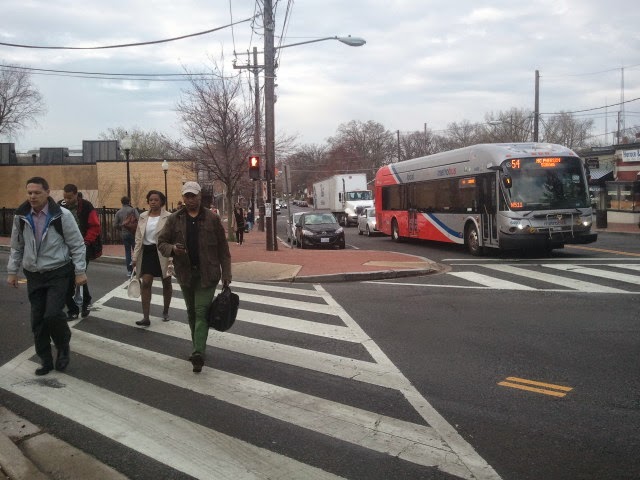 The "problem" with the studies is that they don't necessarily have a good framework for assessing all modes and the focus on cars makes it hard--especially in terms of how citizens see the purpose of such studies--to grasp sustainable mobility and how proximity to high quality transit or location within the traditional street grid and density and at activity centers, reduces car trips cars more than it creates car trips.

(I understood this deeply on a conference walking tour in Annapolis, where the site for a new development on West Street was pointed out, and there was discussion about neighborhood opposition.  I realized that virtually every trip to that particular location was likely to be made by car--not that the road network couldn't handle it--whereas a comparable site in DC was likely to attract many patrons by foot and transit.  But locations possessing a rich fabric of sustainable mobility are rare.) 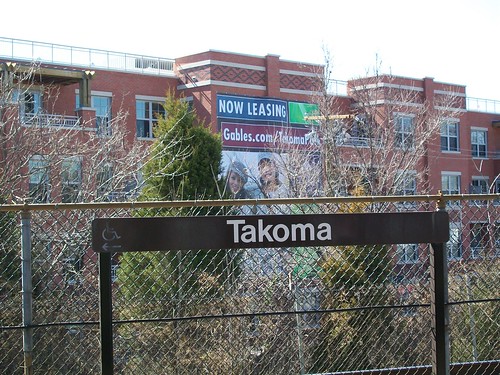 For example, I live in DC's Outer City ("DC as a suburban agenda dominated city") and from where I live, it is 0.8 miles to the Takoma Metro.

Most of the new development in our neighborhood is multiunit residential within a two block distance from the Metro, and "traffic studies" for new developments tend to conclude that of the current developments--a mix of apartments and condominiums--only about 25% of the rush hour trips from and to these buildings are made by car.

To me, this makes total sense.  If getting around by transit is important to you, ideally you will self-select and live where transit service is optimized. Choosing to live within a two block distance of a Metro station is an example of such decision-making.

And in recognition of such choices and its location, the newest apartment building, Takoma Central, has a screen in the common area on the ground floor showing a constantly updated schedule of the Metrorail and Metrobuses serving Takoma Station using the RideDC app from DC Department of Transportation (although the application would be even better if it included Montgomery County's RideOn bus service, which serves Takoma--and other DC locations on the border with the County, including a special route to Sibley Hospital).  (Baring that, Takoma Central could include another screen for RideOn bus information.) 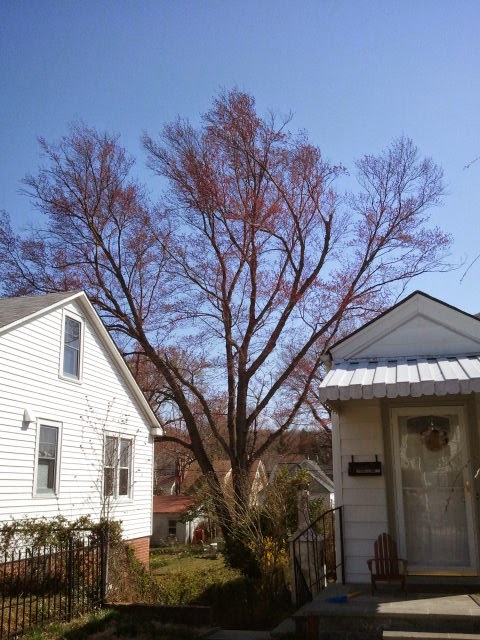 But much of the surrounding land use in the ward is single family residential, predominated by detached housing, with some duplexes and triplexes (by the time this area was constructed, building regulations limited the creation of full rowhouse blocks as a way to informally segregate) and some, but not many apartment buildings.

Many of these people drive primarily, and their presumption is that "everyone in the neighborhood drives" regardless of the reality (many people use transit including buses, some bike).

This makes approval of new "transit oriented development" maybe not difficult, but definitely contentious, especially when the site plans call for providing less parking than one space per adult let alone one space per unit--even though the traffic studies also find that the parking structures of the existing properties by the Metro station are significantly underutilized.

Calling "traffic studies" "transportation impact studies" is a way to begin to change the frame and language of the argument--so long as the full framework of such studies looks at all relevant modes.

=====
An aside on Takoma and parking.  In mid-February, a new Busboys & Poets opened in the above-mentioned Takoma Central building, and they don't provide parking.  The neighborhood listserv lit up with a discussion of this travesty.  I admit that B&P did a bad job of advance planning in dealing with mobility--this is something I talked about with a Takoma Park city planner last summer, and she said at that point B&P wasn't interested in planning for shared parking options.

I did a census of surface parking availability in a two block distance from the B&P, and found not quite 500 spaces, most are not used at night, especially those spaces at a funeral home immediately across the street from B&P.  (There are two parking structures in this area, which I couldn't access, and therefore, didn't count.)

The parking is available, it's just not set up to be used.  DC doesn't have a regulatory framework for sharing parking across businesses in a contiguous commercial district (although here it's complicated by the fact that it is parking located on either side of the City-County line).

FWIW, while it is not downloadable (grr), the Hyattsville artsdistrict commercial district has the best "parking and transportation" guide of any neighborhood commercial district in the area.  Takoma's is quite good, but not as good on providing sustainable mobility information. 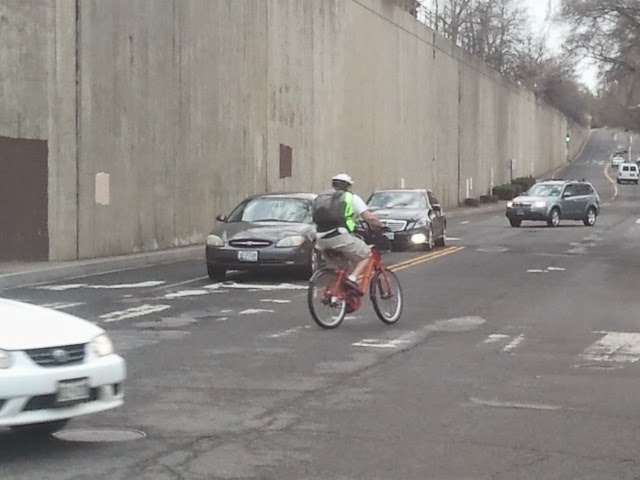 A bicyclist on a Capital Bikeshare bike at Aspen Street and Blair Road NW, Takoma DC.  (Bike share stations in this area were installed mostly by Montgomery County, on the Maryland side of the line, although there is one station on the Metro Station site.  The next closest stations are on Kennedy Street NW and at Fort Totten Metro Station.

I'd agree the core problem is the parking inventory.

Having large lots off limit to the public is a problem. I sugested an app a few weeks ago -- valet parking -- that would help solve that. You don't need an app obviously just an agreement to somehow pay for that off street parking.

The arlington model of heavily restricting parking in low density areas does work. Dowside in incentive for turning those areas into multi-unit are signfically diminished but that is less of a problem for Arlington than a historical down-market like DC.

I forgot to mention I e-talked with the Takoma Main St. director about this after the last exchange. (I pointed out they need to provide more detailed info about sustainable transportation options on their website and materials. E.g., they mention car2go but not where people can park--this matters because the bulk of the Takoma commercial district is on the Maryland side of the line--or RideOn buses, but not the specific routes that serve Takoma Station, etc.

She said they explored and tested valet parking--given that if we drive there, it's by car2go--so I wasn't aware of it, but there just wasn't enough demand.

Basically, B&P just needs to develop an arrangement with the funeral home across the street, and the problem would be solved.

However, to maximize utilization of the space, they'd need valet parking to cram more cars in, and they probably don't want to pay for two extra staff.

Then again, I'm not willing to do a "parking study" for them for free to see what they really need. Maybe having 15 or so marked spaces would be enough. (But with valet service they could more than double the number of spaces.)

2. wrt your point about Arlington, in DC''s Outer City residential districts it is almost impossible to upzone. So there is no way someone can buy a couple contiguous lots and create an apartment building.

It's the rowhouse districts generally (Friendship Heights, Petworth, etc.) although definitely Chevy Chase too, which is dense detached housing, that have parking inventory problems, and then by Metro stations, as people in outer parts of wards drive in to take the Metro.

My block isn't even zoned for permits... but many blocks are, if they are near the Metro, more dense, or near other activity generators (like schools).

OTOH, if you park repeatedly on the street with out of state plates, you will get a citation to prove the car shouldn't be registered in DC.

This is a great post about the Transportation Impact Study versus Traffic Studies.
This is a useful post.