One of my jokes about the debacles (which kill me) of the creation of streetcar service in DC is that DC and Seattle started planning for streetcars at the same time, in 2003, but Seattle's first line opened in 2007, while DC's single line will open finally in February 2016. 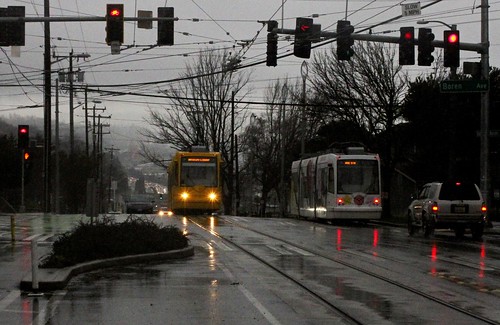 In March, the Sound Transit Light Rail extension to Capitol Hill will become operational, so the streetcar will expand the intra-city catchment area of the new transit station.

Although oddly, the streetcar stops one block short of the station, although there are plans to extend the line to the station and beyond.

Also see "STREETCARS ARE ABOUT TRANSIT, just in a different way from how most people are accustomed to thinking about it," for discussion on the difference between intra-city and inter-city transit systems. 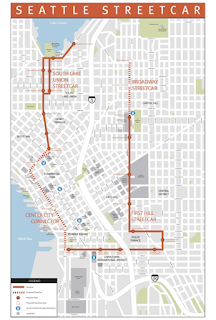 It's a bit odd that the two lines aren't connected, but there is planning underway for the "Central City Connector" to link them. Construction could start on this segment of Seattle's streetcar trackage next year.

The new line would have opened more than one year earlier, but there were problems with the manufacturing of the cars, which led to significant delays ("Almost ready to ride: tours of delayed First Hill streetcar line begin," Seattle Times

I am impressed with the strong graphic treatments used on and in the transit shelters for the streetcar line. 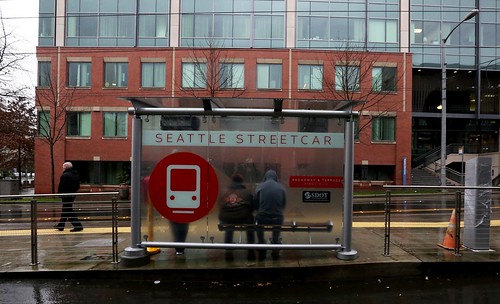 Including the map graphics. 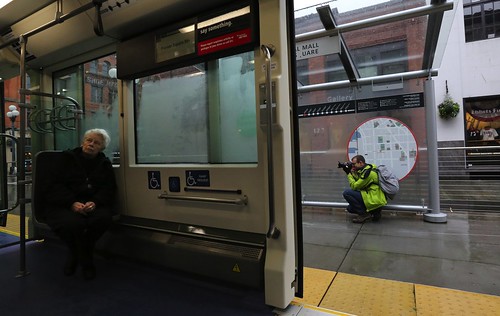 Currently, Seattle doesn't allow advertising in bus shelters and elsewhere in the public space, although they are aiming to change this ("Seattle plans to declutter street furniture with private help," Seattle Times), and in the interim they were looking to sell sponsorship of streetcar stops, although it's not clear that they have sold any.

Note that based on the article about "street furniture" and the peer examples listed, I expect that Seattle will make the same kinds of mistakes that DC did with its "bus shelter" contract, which limits the upside for the city in terms of being able to integrate innovative programs over time.