-- "BTMFBA: the best way to ward off artist or retail displacement is to buy the building," 2016

Speaking of "the market", I was struck by this description of it in a recent entry, "No spring in the UK air," in the Mainly Macro blog:


The political economy of modern Conservatism is extreme laissez faire in the following sense. The belief is that if you let businessmen (they are usually men) get on with things, and take away red tape, regulations, and reduce taxes, all will be well. There is no need to help with public sector investment and R&D initiatives, or worry about rent extraction: the private sector can always do things better itself. The public sector does not support the private sector, but just gets in the way. 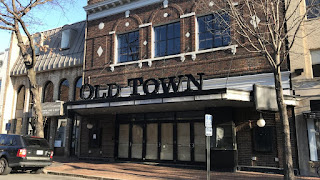 
The Alexandria Gazette-Packet ("Marquee Property in Alexandria: Asana seeks tenants for Old Town Theater") and the Washington Business Journal ("New owner of long-shuttered Old Town Theater is searching for a tenant. Will it remain a theater?") are reporting on how Asana Partners, the North Carolina-based real estate firm that now owns the building, is marketing the property.

Obviously, a NC-based firm isn't likely to prioritize "cultural" and community goals.  Furthermore, the firm's purchase of multiple buildings is evidence that the company is active in the Alexandria property market because it is a regionally/nationally important submarket ("Charlotte retail investor buys six more Old Town Alexandria buildings," WBJ).

Just as Rock Creek Property Group didn't as it related to the Takoma Theatre, which will soon become a clinic for Children's Hospital.

These firms aim to maximize the economic returns of its property portfolio.

In "Art, culture districts, and revitalization," I made the point that artistic disciplines need their own plans, including elements on facility ownership, management and access, and that they can't expect real estate developers to do this for them, putting cultural goals ahead of private benefit.

Relatedly, as discussed in the recent entry, "Mount Rainier aims to recapture the Kaywood Theater as a cultural anchor," if you want the building to remain a theater, you need to extract the building from the market.

There are hundreds of examples across the country, and even here and there in the DC and Baltimore market, most notably with the Avalon Theatre in the Chevy Chase neighborhood of DC, and small for profit businesses may own small theaters too, but usually it's their only business, like the people who own the Charles Theatre in Baltimore ("A Fan Saves an Art-Movie House in Baltimore," New York Times)..

However, having such a theater would be a natural complement to the Torpedo Factory art center (The Impact of the Torpedo Factory Art Center on the City of Alexandria, GMU) and would be important to the continued viability and competitiveness of Alexandria as a regionally significant retail and entertainment destination, which justifies the involvement of government and other stakeholders.

It's also an indicator of the need to have a business improvement district to better plan, manage, and advocate for the business district.  Although this course of action was recently rejected ("Alexandria abandons its Old Town BID quest," Washington Business Journal; "City manager advises against Business Improvement District in Alexandria," WTOP-radio).

=====
Note that wrt "cultural plans" and "facilities elements" therein, privately owned cultural-entertainment assets need to be inventoried and listed, as well as monitored, to ensure their continued use as cultural and civic assets, even though they are part of the private sector but functioning more broadly.

Then with scenario planning, the local government has the plans in place to be able to act, if extraordinary involvement is required. In this particular case, I'd argue there is extranormal value in maintaining the use of this property as a cultural asset, because of its ability to draw patronage to the entire district. 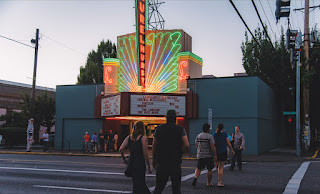 I think the New Hope Cinema Grill in Suburban Minneapolis is a great example too ("Outtakes Bar & Grill opening in New Hope," Sun-Post).

It would be useful to have a master list of such facilities, both public and private, across Virginia, to aid in developing such a proposal for Alexandria. I know of at least two, the Byrd Theatre in Carytown, Richmond and the soon to reopen Ashland Theatre in Ashland.

Old Town has a ton of retail vacancies and its going to get worse before it gets better.

That's why you need a BID. 1. Cities aren't always so great at retail recruitment, although imo Takoma Park does a good job assisting such efforts in Old Town.

2. You can't expect private owners to do this collectively and well and agree here and there to receive less than optimal returns in order to create an optimal retail and entertainment mix.

Note I added an addendum that you might want to read.

Not disagreeing on the BID. Really bad decision to scuttle it. Old Town is notoriously difficult to do business in, and the local citizens feel entitled to weigh in and nitpick every aspect of a businesses operation. And always parking parking parking. I work in OT and drive most days. I usually park for free. It's not that hard. In decades of living in the city and going to Old Town, i've never parked more than a couple blocks from my destination. There are so many better places to spend time and money, but things will need to decline a bit more before some of the locals get that, and even then they probably won't care as long as their property value doesn't tank. Oh, and the current mayor is a moonbat, but she knows who butters her bread.

Thanks for sharing your experience and perspective.

wrt BIDs, I believe in them, although there is the tension between private management and public space, and the dominance of property owners in shaping the agenda.

I am gonna be writing about this wrt Silver Spring and an effort to create a BID there.

social role of cinemas as facilitators of group experience: