It's a fall complement to how most local advocacy groups and the promotion calendar has walk and bike to school day in May, during National Bike Month.

-- Toolkit for International Walk and Bike to School Day

While it's always important to promote walking and biking, to me, May is exactly the wrong time to be doing it for schools, because it's at the end of the school year.

Instead, it should be done near the start of the school year, to promote biking (or walking) to school for the entire school year, not just towards the end of it. 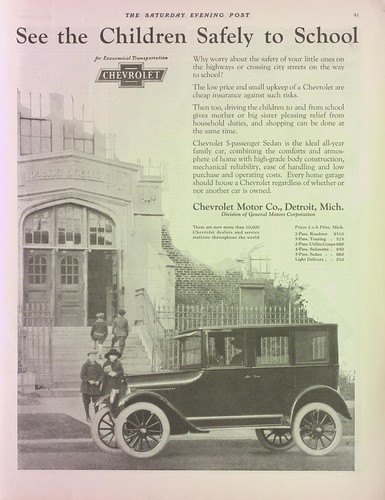 Car companies have been promoting driving kids to school for almost 100 years.

Monday's "Ask Amy" column discusses how one boy prefers to cycle on the way to school by himself, rather than ride with another guy.

Bike advocacy calendars.  Need to be created the whole year, including bike to school in the fall and spring, even a Winter Bike to School Day.

Stoneleigh Elementary School, Baltimore County.  When I did the bike plan in Baltimore County, I was fortunate to be invited to observe International Walk and Bike to School Day at Stoneleigh Elementary School, where they had a robust walk to school program that had been initiated by parents, but was warmly supported by the school's principal who in turn was super as well.  To my way of thinking, the principal created a kind of site-based transportation demand management program. 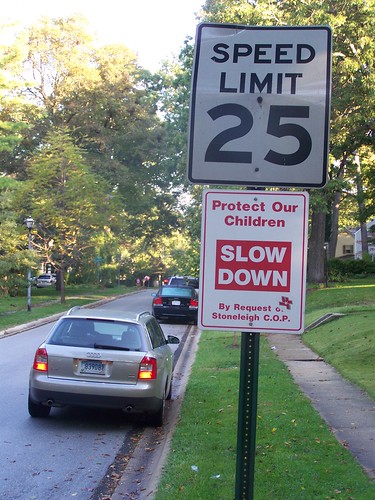 Compared to the traffic nightmares you witness around schools in DC, it was amazing.

Recommendations from then. After that day, learning about the efforts of two particularly motivated mothers with a lot of time to get the program off the ground, and after learning about Boulder Valley's district-level support program, I suggested that the best way for the State of Maryland to promote walking and biking to school would be to require the school districts to address all forms of transportation, including walking and biking, systematically, and at the district-level, rather than focusing solely on school bus transportation--rather than to hope for the best, that parents at various schools would develop Safe Routes to Schools programs on their own.

I hadn't thought about that including schools, but there is a need for it, as someone just wrote on my neighborhood e-list about how her son's bike was stolen while he was attending Takoma Park Middle School (Montgomery County, Maryland).

Because some drivers are a******* should you just give up?  There is an article at Greater Greater Washington, "Why I stopped taking my kid to school by bicycle," that's I find difficult relating to. 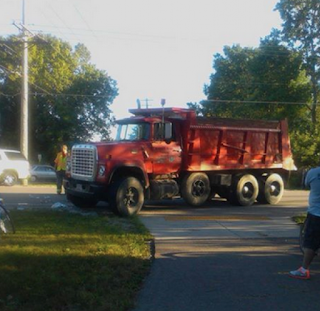 
It’s over because a man driving a dump truck the size of a house put my son’s life in danger.

The details of what happened unfortunately aren’t that remarkable. It was a perfect storm of road rage, reckless driving, terrible street design, and total lack of any kind of recourse, so basically a normal Tuesday on a bicycle in DC.

The dump truck driver drove aggressively and blasted his airhorn over many blocks on R Street NW. He was just feet from a half dozen other people on bikes who could do nothing but cringe and hope he didn’t mash us into pulp.

After we turned up 18th Street and jumped the light at S Street to get away from this reckless man, Oliver turned and asked, “Can we take the Metro instead?” And that was it. I decided I can’t subject my son to this traffic violence anymore. 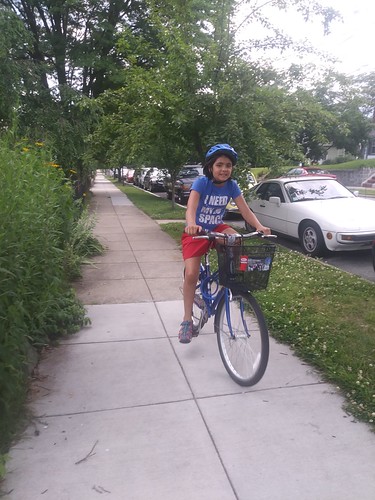 Marina.  I helped her get "a new" bike from this guy, Harper Cycles, who sells bikes at flea markets, such as the one in Dupont Circle at 15th and P Streets on Saturdays and the Takoma Farmers Market on Sundays.  He also does bike repairs.

If I let one terrible incident stop me from doing X or Y or Z, my life would be pretty constrained. In fact, I wouldn't have continued to live in the city after 1989 (a terrible crime incident which ultimately wrecked my then marriage), I would have moved to the suburbs, bought a gun, been fearful, etc.

Exit or Voice?  One of my complaints about GGW is that there is a fine line between whining and seeking solutions.  I find them to be bigger on whining and severely deficient when it comes to proffering robust frameworks for improving urbanism practice.

It would have been so easy to offer up some alternative ways of addressing the problem other than bailing (cf. Exit, Voice and Loyalty by Hirschman).

Relatedly, GGW has a new piece about tomorrow's Walk to School Day, "Walk to school day is right around the corner. Wouldn’t it be great if it were every day?," and it offers very little in actionable recommendations and nothing in the way of useful resources.  It does say there should be a systematic approach, and leaves it at that.

Report the errant driver?  And I know in that situation I would have called the police and reported it, and I would have gotten information about the truck and called the company, made other complaints, etc. I have done that multiple times.  (Following the driver to its destination, you could have identified the client for the trucking company, complained to them, etc.)

(In DC, I've argued for a long time that as part of the licensing requirements for truck drivers, they should be required to go through special driver training concerning urban mobility, specifically pedestrians and bicyclists. DC Government truck drivers and WMATA bus drivers ge such training.)

Why not seek solutions instead of reflexively stop?  I understand that the #1 priority of parents is keeping their kids safe. But I also understand, having started biking for transportation in 1990, that the mobility system still favors automobility and that to do the right thing wrt sustainable mobility, like biking, requires sacrifices. 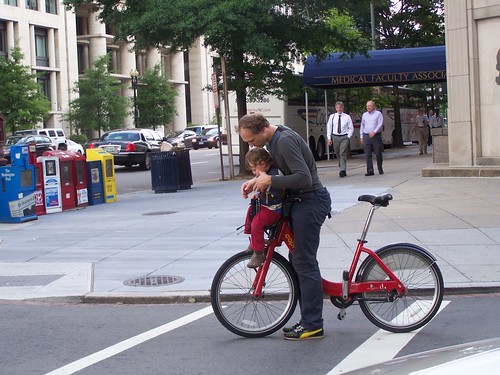 More and more families are biking to school. Some with cargo bikes or other contraptions.

Granted, it's much easier in some places than others, which is why every school should have to have a walk and bike to school plan, which is required in the State of Washington, what the Boulder Valley and Palo Alto school districts do, etc.

I can't fully generalize from my experience, but I have biked to school a bunch of times with the girl next door--she's 11 now--which is about a two mile distance.

There is a stretch where the sidewalks are somewhat inadequate. But even so, we've managed to create a pretty safe route and it will only become better as the sidewalk network approaching her school is built out.

One obvious solution: The Bike Train | group cycling to school. "The Walking School Bus" is touted in Safe Routes to Schools programs. It's pretty simple. It's people walking to school as a group.  There is less discussion about "group cycling" to school.   That should change. 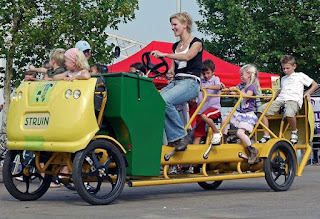 But the Dutch have introduced a true "Bike Bus" ("Bicycle Buses Let Dutch Kids Pedal Together to School," TreeHugger).   Imagine a school or two deploying those.

Other resources.  While I advocate for systematic approaches at the school district administration scale, so that each school has a plan and program, something that seems to be rare, but Boulder and Palo Alto are exceptions and models for the rest of the country, Other good resources include:

--  School Walk and Bike Routes: A Guide for Planning and Improving Walk and Bike to School Options for Students, State of Washington DOT

Washington State doesn't require it, but they recommend that each city create a school traffic safety committee to bring together the school system, police, and other stakeholders to oversee the process of SRTS planning for each individual school, in particular the production and distribution of safe routes maps.

The Feet First advocacy group in Seattle has a wide variety of SRTS programs including the production of walk and bike to school maps for schools there (including private schools).  Granted they are walking-focused, but in any case the organization is a best practice model that ought to be modeled elsewhere.

And in terms of an annual calendar of activities to promote sustainable mobility for school aged children, they sponsor activities for the entire month, calling it Walktober.

Palo Alto produces SRTS maps for all the schools, not just elementary schools.  Besides printing them as brochures and putting them online, the maps are printed in large format posters and placed in each school. 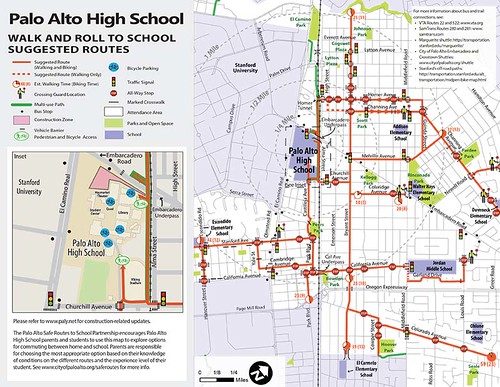 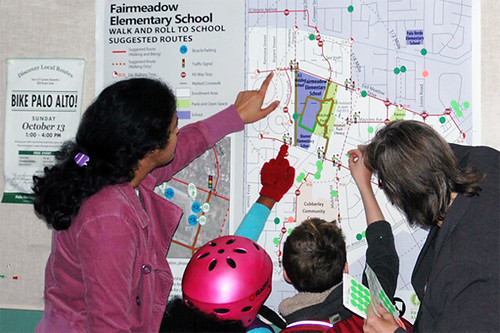 Starkville in Motion (Mississippi) is a good example of how to leverage people's interest in improving walk and bike to school environments as a way to drive sustainable mobility improvements more broadly across neighborhoods and the entire city.

Some cities, like Minneapolis, have city-wide Safe Routes to School framework plans.

Minneapolis Pedal Power program is a model best practice, a biking program for fourth and fifth graders that runs in the Fall, til about Thanksgiving.

It's a perfect way to get kids biking.

And they have bikes for all.