Sadly, for a few decades, the FAA forbade airports from using monies collected as part of airport access charges from being used to pay towards transit connections from existing transit networks.  Vice reports, "U.S. Airports No Longer Have to Build Their Own Terrible Trains," that the Biden Administration has removed this regulation from the books.

“In 1990, Congress passed the Aviation Safety and Capacity Expansion Act of 1990 which allowed airports, with the FAA's permission, to charge a small Passenger Facility Fee (PFC)—initially a maximum of $3 per ticket, later upped to $4.50 and, like the federal gas tax, not increased in the 20 years since despite losing much of its value to inflation—for airport improvements. The statute allows the revenue to be used for specific types of internal airport improvements only, such as people movers that stay within airport grounds. And in 2004 the FAA clarified that only rail lines which exclusively serve airports are eligible for PFCs.

It's kind of too late for the change to have maximum positive effect.

Airports can be distant from city centers.  Utility is complicated by the fact that increasingly, airports are located at a distance from city centers, making the transit trip long, especially by light rail, which is slower than heavy rail (subway) and railroad service.  Although close-in airports, such as Salt Lake City can be pretty convenient even by slower light rail service.
Note these times don't include the time to get from the transit station to the airport terminal.  This can be significant, depending on the distance to the terminal(s) and the quality of ground transportation integration.

* The Silver Line extension to Washington Dulles Airport will open in 2022.
The previous regulation resulted in airports not getting connections from the local transit system, or those transit systems making and funding their own connections, usually many years after the building of the core system.  And often making less good connections because of the need to reduce costs.

The basic point is that as a "platform" a metropolitan transit network needs to provide connections to major destinations and the airport is a key destination that needs to be part of the platform to encourage use.

JFK Airtrain, Queens, New York City.  For example, that's why there is the separate Airtrain light rail connecting to JFK Airport from the Howard Beach Station of the A Line Subway Line in one loop and through another loop from the Jamaica Station/Sutphin Boulevard-Archer Avenue Subway Station, rather than continuing the subway lines to and around the JFK Airport, the way that the Piccadilly London Underground Line provides direct service to three different terminals at Heathrow Airport. 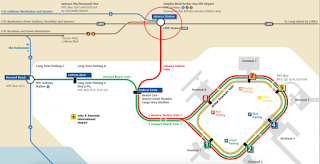 When it comes to airport connections, a problem with the London Underground though is the lack of many elevators throughout the system or wider treads for the escalator.  Because carrying heavy luggage to get to and around the subway--transfers are usually required to get to the Piccadilly Line, e.g., I used the Victoria Line to connect)--is a pain.

LAX.  Los Angeles is developing its own "airport campus" transit system comparable to JFK's Airtrain, because of the previous FAA restriction.

LaGuardia in Queens, New York City.  And more recently Governor Cuomo has pushed Airlink proposals for LaGuardia Airport because of the previous FAA regulation.  But the proposed routing isn't particularly efficient ("The LaGuardia AirTrain Makes Even Less Sense After COVID," Streetsblog, "AirTrain to LaGuardia could open by 2025, but travelers will have to catch it from Willets Point," Airpoints Guy).

In my opinion it makes more sense to extend the existing N/W elevated, but that was never on the table because of the previous regulation.  The Astoria-Ditmars Boulevard Station endpoint of the line is 2 miles from LaGuardia Airport.

Although that's great from Manhattan and the west, and a different solution would be required from the east, although you could just extend the N/W from LaGuardia to the 7 Line.  Although yes, it's easy to draw lines on a map. 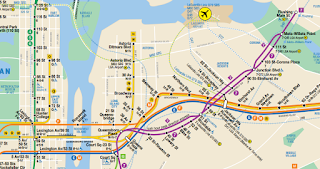 Washington Silver Line to Dulles Airport.  Could have had a closer in station if they didn't have to economically satisfice planning, when the FAA would not allow commingling funds ("Dulles Metro controversy puts Silver Line extension at risk," Washington Post, 2011).  Although the Post was fine with cutting costs at the expense of a more convenient connection to the airport.

Boston Logan Airport.  In the past there had been consideration of adding a moving sidewalk connection from the Blue Line Airport Station T to the international terminal, a distance of 1/2 mile.

More recently, the airport moved beyond that proposal to a campus specific people mover, comparable to other airports.  By connecting to the T, they could also eliminate the intra-airport bus-based shuttle system.    It's probably more cost effective to do a multi-terminal people mover than extending a branch of the Blue Line onto the airport campus.

Tijuana International Airport Cross Border Xpress.  Obviously, the Tijuana Airport in Mexico is not subject to FAA regulations, but many US residents use it.  To facilitate access and "transportation demand management," a pedestrian bridge crossing the US-Mexican border was built by the private sector, integrated into customs and border protocols.  It costs $30.  It's a great example of broader transportation demand management approaches.

Newark International Airport and an opportunity to use the change in FAA policy as a way to shift funds to enable the creation of an infill station in Newark's Dayton neighborhood.  Is interesting because it already has railroad connections (Amtrak and NJ Transit) and a separate Airtrain connection from the railroad station to the airport campus.  (It's airtrain because the Airport, like JFK and LaGuardia is controlled by the Port Authority of New York and New Jersey.

Separately, the Port Authority is extending the separate PATH commuter railroad (although it functions like heavy rail, it's a railroad) to the Airport as well (" The $1.7B PATH extension to Newark airport: A timeline," Newark Star-Ledger).  The plan was to finish by 2026. 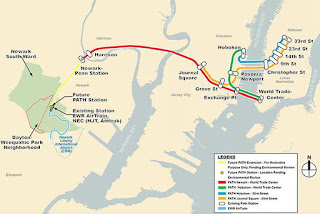 By being able to use airport fees toward the extension, it would be more possible economically to include a station in the Dayton neighborhood in Newark's South Ward, thereby making the transit system more useful and improve equity outcomes.

(It would also behoove PATH and MTA to restore a long since shuttered underground walkway between the Penn Station PATH Station and the actual Penn Station, "Remembering the Gimbels tunnel." New York Post.)

The advantage of PATH is it's priced as a subway trip, $2.75, versus a NJ Transit railroad fare, which is $15.25 one way between New York Penn Station and the airport station.

In a report on railroad system failures on the Southern Railway system in Greater London, a point was made that the Airport was more motivated to have better connections and service, and so maybe the Airport should take the station over ("Gibb report into improving Southern performance published," Railway Gazette).

I used that as an example for National Airport and the nearby Crystal City Amtrak and Virginia Railway Express station ("A brief comment on ground transportation at National Airport vis a vis VRE rail service").

Regarding Dulles---I seem to remember that the station is located far away due to historic preservation (an aboveground station by the airport was nixed, so only alternatives were costly underground, or cheaper far-away above-ground). I'm having trouble finding a reference apart from Wikipedia.

It was money more than anything. But if they could have used the fee revenue stream, it would have been less of an issue. (I have a cite to one of the articles from the time.)

and thanks for your kind comment the other day!