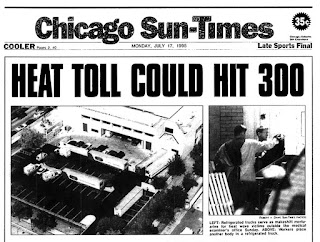 It's being repeated on PBS World Channel as well as stations, and is still viewable online.  (World Channel is carried by many PBS stations as one of their HDTV channels.  Unfortunately, it's not available in the DC area.)

The program is about the 1995 heat wave in Chicago, which killed more than 700 people, which was chronicled in the dissertation and later a book by sociologist Eric Klinenberg. 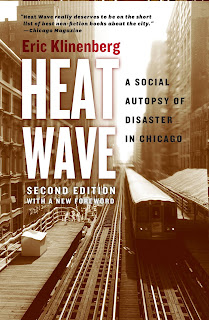 The documentary is about "natural disasters" that are in fact the logical outcomes of social disparities.

The filmmaker, Judith Helfland, is struck by the oddity of how the US emergency management and disaster response system is focused on catastrophic events -- earthquakes, tornadoes, hurricanes, etc. -- and not the kinds of socially determined "disasters" that are the result of economic, racial, and class disparities of the kinds that resulted in the heat related deaths in Chicago.

According to the film, there are about 3,200 premature deaths each year in Chicago that for the most part, result from poverty.

One of the interesting findings in Klinenberg's book is that communities with the same kinds of demographics, but positive differences in social capital, community organizations and institutions, didn't have the same high rates of death.

The shaded areas in this map of Chicago neighborhoods show the high poverty neighborhoods, which pretty much track other high rates of negative indicators (health, low educational attainment, etc.).  They also track the neighborhood redlining maps from the 1930s. 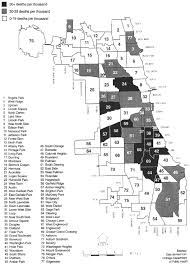 Steve Whitman/Sinai Urban Health Institute.  One of the people featured in the documentary is epidemiologist Steve Whitman.  At the time of the heat wave he was a Deputy Commissioner of Health for the City of Chicago.  He left the city in 2000 to start the Sinai Urban Health Institute at Sinai Hospital.  He died in 2014 ("Steven Whitman, social epidemiologist, 1943-2014," Chicago Tribune). 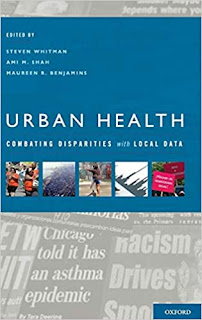 They published a book, Urban health: combating disparities with local data, which outlines the "Sinai model" which is based on the idea that by collecting health data at the scale of neighborhoods, effective responses can be developed to reduce health disparities.

Interestingly, footage showing Mayor Daley at press conferences during the heat wave shows the same kind of blockheadedness demonstrated during the nation's most significant public health disaster--the response to covid19.

Daley downplayed the deaths, blamed the victims, etc.  The city does have a regularized response program for heat waves, so they don't experience the same level of premature death that they did in 1995, but they haven't extended the approach to poverty or chronic health conditions more generally.

I've written about this general issue in "More communities need to integrate health care and public health programming: Prince George's County, DC, etc." (2020).  It builds on a series in 2017 and follow ups, taking a "transformational projects action planning" approach to rebuilding the United Medical Center in Southeast DC, in a manner that would link public health and hospital care with a focus on addressing chronic medical conditions that tend to be a problem in low income communities.

The Sinai Urban Health Institute is another best practice program that should be incorporated into that concept. 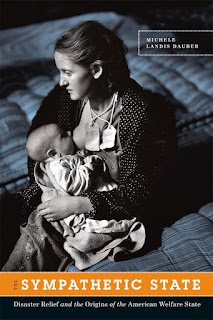 Disaster response as a root of federal social welfare systems.  The documentary also interviews Stanford professor Michele Dauber, who's written The Sympathetic State: Disaster Relief and the Origins of the American Welfare State.  That's another book I need to track down and read.

The thesis is that FDR's New Deal used the long time examples of federal response to disaster and disaster relief as a way to justify the creation of social welfare programs like Social Security.

This lecture from 2013 outlines the arguments of the book.

The Guardian US: Unhoused in Phoenix’s perilous heat: ‘If I don’t keep cool, I’ll die’.
https://www.theguardian.com/us-news/2022/jun/20/phoenix-extreme-heat-housing-crisis

Interesting discussion of structural responses to previous heat waves having some positive impact.

What’s on the horizon for hospitals

Still, Ebi mentioned that there are smaller opportunities that hospitals can — and should — be pursuing to reduce their carbon footprints, whether that be through energy and waste management or by working to improve the well-being of patient communities.

Each of the organizations that signed onto the pledge — which included public hospitals, health-care centers, pharmaceutical companies, medical-device makers and suppliers — are expected to develop climate-resilience plans for their facilities, including plans to support individuals or communities most vulnerable to the effects of climate change.

According to Ebi, any plan should mention what she called the “low-hanging fruit,” including:

Understanding your patient base, and how it could shift with climate change
Outlining community vulnerabilities to global warming (for example, care centers that are based in a flood plain)
Planning personnel schedules around forecast weather events, or rescheduling surgeries to ensure anticipated surge capacity
Providing opportunities for patients that benefit their health and the environment, such as a garden to supply fresh food for the cafeteria

3. A Texas meteorologist warned of power outages. Then the lights went out.