The Washington Post has a couple articles, "Three-bedroom, two-bathroom house near Hyattsville, Md., lists for $368,999" and "8 important — and overlooked — questions to ask before buying a home Rather than focusing on decor, home buyers should learn about neighborhood development, noise levels and weather hazards," about housing purchase decision making, which led me to revisit two old blog entries, written in response to articles about housing price decline in the face of the 2008 recession, because I thought the Post articles failed to take into account "place-based values" associated with housing:

-- "The eight components of housing value," 2016 (updated from previous posts)
-- "Washington Post series on "Dashed Dreams: The Plight of the Black Middle Class", 2015 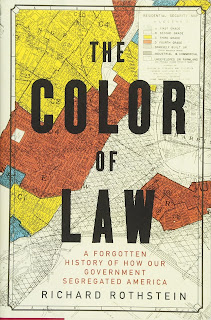 (WRT housing values in Prince George's County, I'm not going to deny racism in the structure of the housing market there.  For a good general discussion, see the book The Color of Law: A Forgotten History of How Our Government Segregated America.  It's damning.)

To me, the first article, which discusses a competitively priced house in the West Lanham Hills neighborhood of Prince George's County, illustrates this exactly.

The article says, "well, the house is cheaper than Hyattsville" and "it's close to Hyattsville."  But it isn't, it's 4 miles away.  And there is a reason that houses cost more in Hyattsville, it's closer to DC and it has a fair amount of amenities in close proximity.  From the article:

Home buyers frustrated by high prices in D.C. have turned to Hyattsville, Md., not far from the D.C. border in Prince George’s County, for many years in search of more-affordable homes.

The city’s Arts District, shops, restaurants and proximity to public transportation make it a walkable alternative to D.C.

But home prices in Hyattsville have made some sections of that community out of reach for buyers with a budget capped at $400,000. For example, the median sales price for a home in the Hyattsville Zip code 20781 was $533,000 in July, according to Bright MLS. Buyers seeking a more affordable alternative might want to try neighborhoods just outside of Hyattsville.

For example, the single-family home at 7735 Emerson Rd. in the 20784 Zip code in Prince George’s County near Hyattsville is priced at $368,999. The home is not in a homeowner association, which means HOA fees are not required. Annual property taxes are $3,327. One-bedroom, one-bathroom condo in Hyattsville, Md., lists for $120,000

The house is in the West Lanham Hills neighborhood and is 1.7 miles from the New Carrollton Metro station. The Hyattsville Arts District is about four miles away, and Woodmore Towne Centre, which has shops and restaurants, is about five miles away.

But even though the Route 1 corridor sustained long term housing price declines compared to DC, at the same time communities like Hyattsville or College Park have a lot of nearby amenities that aren't present in much of Prince George's County, which is reflected in housing values and prices in those communities, which I tried to identify within the "8 components of housing values":

Basically, the difference is between walkable and automobile centric communities ("Planning for place/urban design/neighborhoods versus planning for transportation modes: new 17th Street NW bike lanes | Walkable community planning versus "pedestrian" planning," 2021).
And the difference between buying a house and "buying a neighborhood" which presumes the existence of a community.
So while a house in West Lanham Hills is cheaper than Hyattsville's core, there is a reason for this, and long term while the value of Hyattsville housing is likely to increase, you can't say the same for West Lanham Hills.
I can't say I know the West Lanham Hills neighborhood at all, but this entry, "When the one over neighborhood is in the county next door, and housing prices have been in the tank: Mount Rainer, Maryland" (2016), lays out ways that such communities can aim to better leverage its location and proximity to develop more of the characteristics that attract people to walkable communities.
Also relevant are writings on "15-minute neighborhoods," walkable communities ("How Can I Find and Help Build a Walkable Community?," Walkable Communities) and commercial district revitalization ("The 20 Ingredients of an Outstanding Destination" by Roger Brooks International).
2.  The "8 important — and overlooked — questions" article does have some good questions.  They aren't necessarily as focused as my 8 components, but they are important aspects to consider: 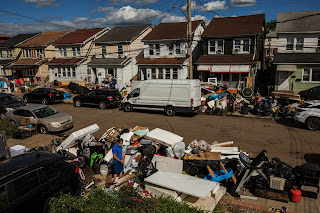 All the houses on this block of Queens, New York were damaged in the flooding that resulted from record rains from Hurricane Ida.  Photo from "They Put Everything Into Their Homes. Not One Was Spared in the Flood."

I realize while I captured broader risks like public safety or say "airport noise" (citation in a comment on the article) in "House Use Value," "Neighborhood Place Value," and "Community Place Value", I didn't acknowledge what we might call "climate change risk" -- floods and fires, water supplies, city systems risk, specifically stormwater and sewage systems, lead in pipes ("A Black town’s water is more poisoned than Flint’s. In a white town nearby, it’s clean," Guardian, "How Can New York City Prepare for the Next Ida? Here’s a To-Do List," New York Times) and extreme rain (e.g., we had to add a second! sump pump to our basement last year, because our house was on the edge of an area where it rained 5 inches in one hour, and the blocks in our area have a "high" water table--a creek was undergrounded by the land still treats the area like a creek). 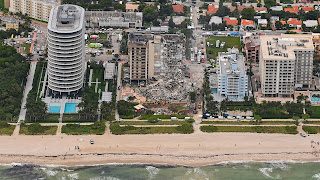 With Post article point 7, HOAs, especially with condominiums is the qauality of the board and building/complex management, age of the property, the maintenance fund and identified needs for expensive systemic improvements ("Revisiting stories: the need to provide programs to step in and deal with multiunit properties as they age").  These factors contributed to the failure of the Champlain Towers Condominium in Surfside, Florida which killed almost 100 people ("Surfside agonizes after condo collapse, with a memorial hanging in the balance," Baltimore Sun).

Housing decision making guide.  Ironically, both with our house in Manor Park DC, near Takoma Park, Maryland, and our house in Salt Lake City, in neither case did we do a full scale "evaluation of amenities" wrt the choice.

With Manor Park, we knew that the Metrorail Station and Old Town Takoma were close by, the latter with a couple decent restaurants, a weekly farmers market, and a pharmacy, and a couple of grocery stores within about 1.25 miles, that it was bikeable, and only 5 miles from Downtown.  (Two years after we moved in a hardware store opened, a real plus.)  We didn't look at the specifics of bus service (fortunately, one of the lines was modified to have direct service to downtown during rush hours), and other elements.

In Salt Lake, we were very rushed to act as we were combining our household with that of my wife's aging parents, for medical reasons.  I didn't even look at the house, as I was busy fixing up our house in DC.  But key was the ability to accommodate four adults.

Suzanne knew about one specialty grocery store being close by, but didn't look at anything else, other than it was in Salt Lake, and not too far from Downtown (5 miles) and another major community district (2 miles).  Other than that, no real evaluation, not even the health needs of her parents (oops).

So, in recognition of this failure, the recent Post articles, and my previous writings, it's worth putting together a checklist to help people consider some of these place-based factors as opposed to "housing use value" characteristics, more systematically.

Fortunately, the amenity proximity with the Salt Lake house turned out to be fabulous.  It's a bit farther out from Downtown than I would wish, and the hills are killers as it relates to biking, but frankly, the amenity package here is better than what we had in DC, and DC has more than 3x the population of SLC. 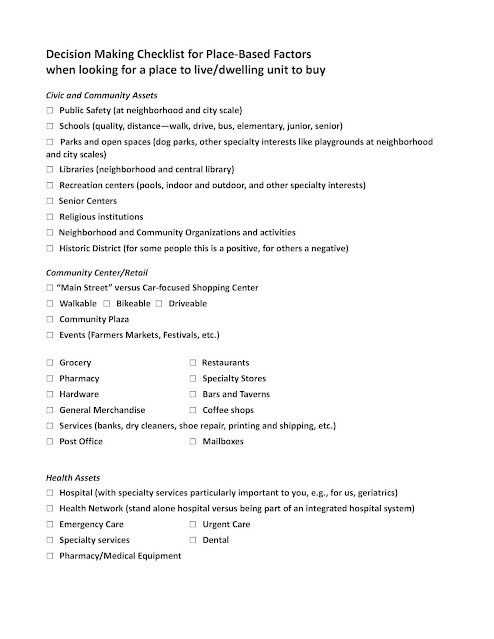 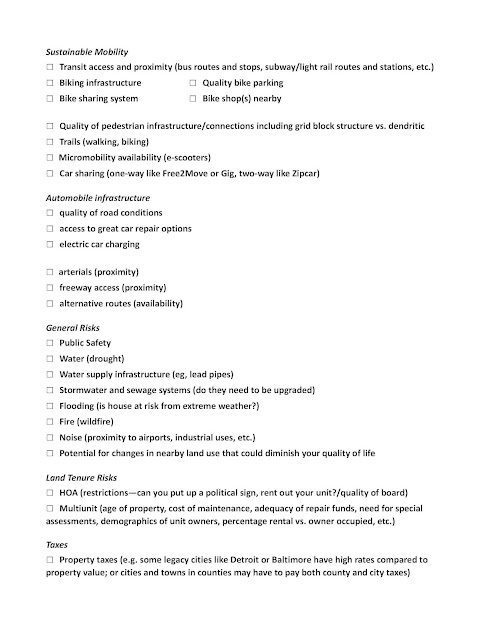 I think that I should go back and revise the "The eight components of housing value" entry to more carefully delineate risk factors within each element, as appropriate.

In the retail amenities section, in services it should include personal fitness (yoga, Bodywise, Crossfit, etc.).

Utility reliability, mountains, governance systems (although most people won't look at that).

"Vote with your feet."
-- Charles Tiebout

The price of living near the shore is already high. It’s about to go through the roof.