The Guardian has a chilling story, "A third of Americans are already facing above-average warming," about how many US counties (and the cities within) already are experiencing a warming of at least 1.5℃. 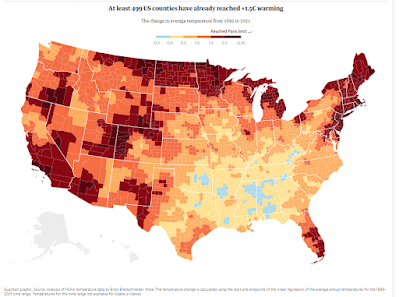 In the article, the map is interactive by county.
Hotter and colder temperatures, more virulent weather events, wildfires, flooding, drought conditions, sea level rise affecting coastal land, and an increase in heat- and cold-related deaths are all fallout from climate change.
Some cities are beginning to appoint "heat officers," creating positions within government to focus on climate change effects. 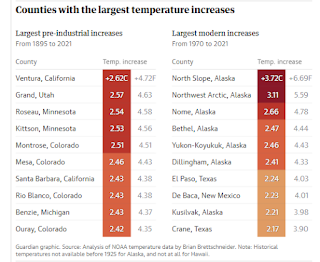 Apparently, Miami was the first city in the US to do so ("Miami’s first-ever chief heat officer on the climate issues that scare her the most—and what gives her hope," CNBC).  The Guardian has a recent story about the activities of the heat officer in Phoenix ("America’s hottest city is nearly unlivable in summer. Can cooling technologies save it?"), a city that tends to have the US's highest summer temperatures.  From the article:

Almost 200 people died from extreme heat in Phoenix in 2020 – the hottest, driest and deadliest summer on record with 53 days topping 110F (43C) compared with a previous high of 33 days. Last year there were fewer scorching days, but the death toll remained staggeringly high, with people experiencing homelessness and addictions dying disproportionately....
Last year, after another deadly summer, the mayor announced the region’s first dedicated unit to tackle the growing hazard of urban heat, which also threatens the city’s economic viability. ... 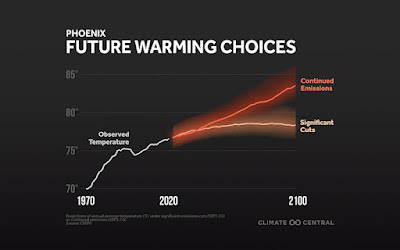 Hondula recently submitted the 2022 heat response plan to city hall, in an attempt to coordinate the existing patchwork of services. “I’m impressed by the number of programs but the death and illness numbers are moving in the wrong direction, so there’s a disconnect we need to address,” he said. “If we mean to take a hazard seriously, relying on good fortune, luck and happenstance is not the best model.”

Mitigation will be focused on trees and infrastructure, which will be led by an urban forester and a built environment expert who are yet to be hired.

-- Heat Response Plans: Summary of Evidence and Strategies for Collaboration and Implementation, CDC
-- "Planning for Extreme Heat: A National Survey of U.S. Planners," Journal of the American Planning Association
-- "Will more cities hire a Chief Heat Officer," NBCLX
I guess you can call them heat officers, but they are really climate change officers -- a few years ago the big term was "resilience."
-- Resilient Cities Network
For example, in Utah drought is a big issue, and Salt Lake City's efforts on reducing water consumption saved more than 2 billion gallons of water, according to the mayor ("Here’s how much water Salt Lake City residents saved this summer and what it means for next year," Salt Lake Tribune).
Although residential water use pales compared to agriculture and industrial use, and Utah in particular has few conservation systems in place for large scale water users ("Utah has a water dilemma," High Country News).  Some Utah communities have stopped approving residential building permits because they can't guarantee water supply to new housing ("First of many? Drought-stricken Utah town halts development," GreenWire).
A Climate Change Officer should be dealing with all of these effects, depending on what are the biggest problems in particular communities.
Citizenship culture in Bogota.  A previous mayor of Bogota, Andreas Mockus, initiated what he calls "citizenship culture." One of the examples was in a saving water campaign, he was filmed taking a shower with minimal water use ("Building "Citizenship Culture" in Bogota," Journal of International Affairs, 2012).  From "Academic turns city into a social experiment," Harvard Gazette:

When there was a water shortage, Mockus appeared on TV programs taking a shower and turning off the water as he soaped, asking his fellow citizens to do the same. In just two months people were using 14 percent less water, a savings that increased when people realized how much money they were also saving because of economic incentives approved by Mockus; water use is now 40 percent less than before the shortage.

Sustainability commissions as opportunities for rearticulating issues and increasing engagement.  10+ years ago, communities creating sustainability plans and citizen commissions to implement them were all the rage.
While I am not sure how much progress has been made since, at the time I was impressed at how motivated citizens were to get involved in the issue, through commissions and other venues, and they were willing to think anew about issues that they had taken for granted, like solid waste, food waste, energy, and transportation impacts from automobility.
-- "Civic Engagement for Environmental Sustainability," National Civic League