I am a big fan of the German "transport association" model (VV) for integrating transit service across regions and states.  The way transit service works in London, Paris, and Melbourne is similar.

In the US, the VV model is definitely in order for Boston, DC-Maryland-Virginia, New York, Philadelphia, and San Francisco, where services are balkanized in ways that make transit less effective and competitive.

-- "The answer is: Create a single multi-state/regional multi-modal transit planning, management, and operations authority association"
-- "Branding's not all you need for transit"

The Tri-State Transportation Campaign has produced a report, From Here to There: Regional Rail for New York, calling for the integration of three the area's four railroad passenger services, Metro-North, which serves New York State and Connecticut, and the Long Island Railroad, which serves New York, both operated by New York State's MTA, and NJ Transit, which operates in New Jersey, with service to New York City (they run a couple Metro-North lines too).

Instead of a bunch of lines terminating at Penn and Grand Central Stations, lines would merge and become "through running."

Instead of limiting all of the region’s rail commuters to a single destination in Manhattan, through-running will greatly increase the number of places that can be accessed by a single-seat or single-transfer ride.” 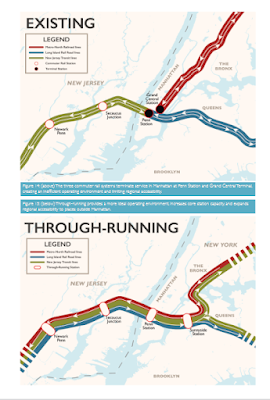 They aren't the first to recommend integration.  One of the advantages, speaking of throughput and the required amount of equipment and drivers, is that by merging lines, you can have more service more quickly.  And that would mean less expense at adding platforms to Penn Station, etc.

(A similar example is how New York City Subway, after a bad accident, spent much of its energy on reducing the speed of trains, reducing the reliability of the system.

The Second Avenue Subway blog pointed out that by restoring reliability by increasing speed again, they wouldn't have had to spend billions of dollars on a Second Avenue Subway, because the existing lines would have worked very well instead--although later phases to extend service into Harlem are worthwhile.)

Doing it won't be easy.  There are different power standards, and New Jersey and New York State have to agree to the change, and states in general and New York and New Jersey in particular don't have a good history of working together.. But doing it would result in much better service at lower cost. 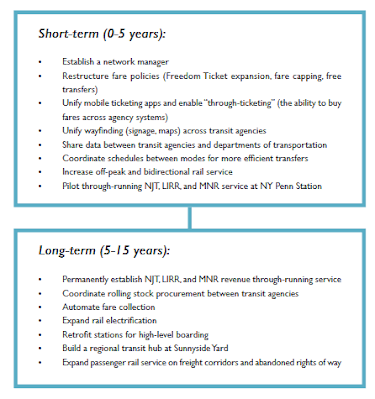 No place for PATH?  Interestingly, the report doesn't address PATH, the rail service between Newark/Hudson County and Lower Manhattan.  Maybe it's not included because it's treated as form of heavy rail/subway service, but it is in fact a railroad-based service. 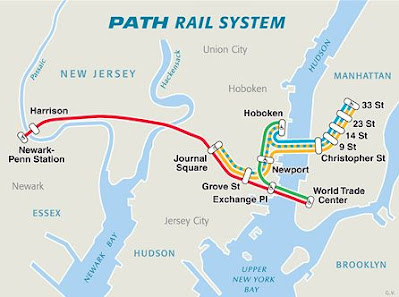 Are there opportunities to extend PATH deeper into Manhattan (maybe with the post-covid reduction in office work, there's less of a need) and into more of New Jersey? and shouldn't it be included within an integrated rail service.

Not a proposal for a transport association.  The proposal isn't so much for a VV but the creation of an integrated rail passenger system.  But excluding PATH. That's a start.

But there are so many more opportunities for extending transit in NY and NJ, which would be aided by the creation of a transport association:

South Jersey and Philadelphia.  Then there is the South Jersey-North Jersey issue.  A report came out last year suggesting NJ Transit be broken up since it's "biased" towards New York City ("South Jersey is left out so we should split up NJ Transit, report suggests," Newark Star-Ledger).

But the reality is that today's service pattern is based on historic rail service.  When the rail services developed, pre-1920 mostly, service within South Jersey was less important compared to serving Philadelphia, Trenton, and Atlantic City.

The solution isn't to break up NJ Transit, but add service within South Jersey.

Which is one of the reasons Greater Philadelphia needs a VV too.