I get frustrated when reading about pedestrian and bicycle injuries and deaths because there are good evaluation program, PEDSAFE and BIKESAFE, for analyzing accidents and determining if structural-urban design changes are in order. 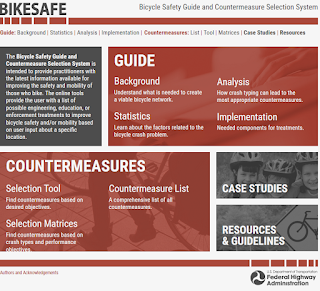 As I get older and my vision declines, which is an issue with night driving in particular, I am more conscious that:

There are a couple of interesting articles on traffic safety that touch on some of these issues.

1.  Stop signs.  Laguna Woods, California, home to if not the first, one of the first, large retirement communities, is going to test lighted stop signs because they have a lot of stop sign violations ("Laguna Woods may replace 21 stop signs with flashing ones ," Orange County Register).  From the article:

“The reason for this truly is to gain higher visibility (for drivers),” Director of Security Services Eric Nunez said during a regular meeting of the board June 7.  According to a staff report, traffic specialists wrote about 500 stop sign violations in 2021.

Intersections that would get the new stop signs would be monitored over the course of six months to measure effectiveness, like a pilot program, Nunez said.

The proposed program covers only about 10% of the stop signs in the community, estimated at about 250, he added. Director Debbie Dotson agreed that the new signs were necessary.

“We don’t need a fatality to show us that we need (this program),” she said.

I think this is noteworthy because it's an instance of using data to identify and respond to problems.

One of my big issues with Vision Zero/Towards Zero Deaths programs is that they don't seem to be particularly data focused and action driven, even though that is the whole point.

Do we really need fatalities to know that crosswalks need to be repainted or created or stop signs installed? 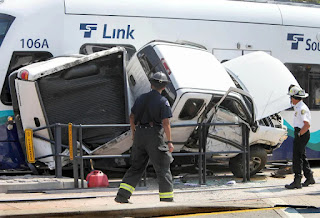 In August 2010, a light-rail train struck a pickup that was making a left turn across the tracks at Martin Luther King Jr. Way South and South Dawson Street in Seattle. The pickup ended up wedged against a railing. (Steve Ringman / The Seattle Times)

2.  Light rail trains.  Seattle is concerned about the number of crashes involving light rail trains, where about 90% of the incidents are determined to be the fault of pedestrians, cyclists, and motor vehicle operators ("Seattle’s most dangerous light-rail stretch — and how to make it safer ," Seattle Times).

They are analyzing the data in a systematic way, like the PEDSAFE/BIKESAFE systems, and beginning to develop systematic responses in an attempt to reduce incidents. 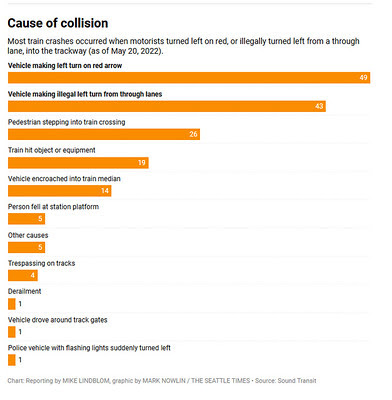 Although some of the issues are age (declining reaction time), and unfamiliarity with traffic that mixes light rail vehicles with motor vehicles.

3.  Brightline railroad/South Florida.  Brightline is a private limited express train operating between Miami and Palm Beach, with plans to extend the service to Orlando and points in between, as possibly further west to Tampa.

There have been many deaths ("After 57 deaths, Brightline in Florida pleads with people to stop dangerous crossings," Tampa Bay Times).  From the article:

Tuesday night’s death was the ninth involving Florida’s privately owned passenger railroad since it resumed operations in November after an 18-month shutdown caused by the COVID-19 pandemic. It’s the 57th since Brightline began test runs in 2017, giving it the worst per-mile fatality rate in the nation, according to an ongoing Associated Press analysis that began in 2019.

Investigators found none of the deaths were the railroad’s fault, determining that many were suicides or drivers or pedestrians trying to beat the trains. The trains travel up to 79 mph through densely populated urban and suburban areas along about 70 miles of track between Miami and West Palm Beach that it shares with the Florida East Coast freight line.

According to the Associated Press, Brightline is the most dangerous passenger railroad in the country in terms of crashes and deaths.  Regulatory authorities are stepping in ("Higher-speed train safety on agenda of Florida officials," AP).

I wonder if for profit firms are less inclined to be focused on this as an issue, even though the regulatory requirements for safety are quite high ("Brightline, Florida seek funds for grade-crossing safety projects," Trains Magazine).

According to a video of a crash, it appears that the gates have gaps.  And while I appreciate the proposed improvement project, obviously Brightline and Florida and federal regulators should have planned better/anticipated that there would be significant problems, and upgraded the crossings to begin with. 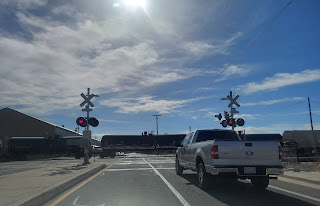 4.  TRAX light rail and railroad crossings at grade, Salt Lake Valley.  One thing I find very interesting with the street crossing bars where light rail tracks cross the street is that there is no gap between the two bars.  Such gaps usually "encourage" people to try to make it through, often unsuccessfully.

Freight and commuter railroad crossings use the same system.  This crossing at 2100 South is used by Union Pacific freight trains and FrontRunner commuter rail.

Although the pedestrian crossings, of "maze" gates, aren't close-able, and there have been some pedestrian and bicycle related deaths at TRAX crossings as a result.

Enforcement campaign on railroad crossings in Broward County. The photo in the article inducates gaps are present when the gates are down.

the Brightline numbers are insane

any other state govt would've stepped in and mandated some changes but FL is zero regulation? but that's what ppl want I guess!

drivers can be dumb af

I write about these kinds of things as "indicators." How many indications are required to motivate a response.

Running the crossing is like not getting vaccinated for covid. Basic concerns about health and safety ought to shape your response in clear ways.