Salt Lake City is fortunate in having at least two film organizations: 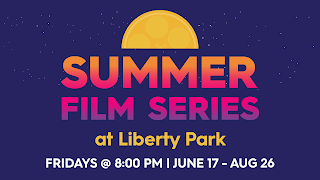 UFC is known for its Summer Film Series, which moves around town to a different venue each summer.

This summer it's at Liberty Park, one of the city's premier large regional parks.  I missed the first film, last Friday.

And this year, the series isn't solely focused on "fun" featuring films like "Casablanca" or "Cars" but includes a number of documentaries on public lands issues, which is particularly important and controversial in Utah because many interests across the state believe that the Federal Government, which owns not quite 67% of the state's lands, is over-involved, over-controlling, and stunts the development of the state.

-- Friday July 1st is on the public lands debate

-- Friday August 24th on reviving a declined and barren farm

Along with some family films and "Summer of Soul."

It's a great example of how public spaces can promote civic engagement and knowledge building.