Canoeing on the Jordan River, one of the events from Latino Conservation Week in Salt Lake County 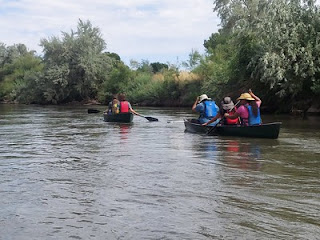 Who knew there is a Latino Conservation Week, nationally or locally?

One of the problems of the decrease in print journalism is that it's harder to find out about activities.

The Salt Lake City Weekly still publishes a hard copy.  It comes out Wednesday but I don't always read it right away.

It has a feature called "Citizen Revolt" with six short articles on activism where three list upcoming events. But it doesn't have a full calendar for the week with items like lectures, etc.  The Salt Lake Tribune has an events feature in its weekend edition which comes out Saturday.

Fortunately I read the paper in time to be able to go to this event.  I didn't sign up but there was room.

The Jordan River flows from Utah County through Salt Lake and Davis Counties to the Great Salt Lake, on the west side of the Salt Lake Valley.

In Salt Lake County, it's mostly comprised of stormwater and releases from the creeks after the point at which drinking water is diverted.  It's about 50 miles long since it's been channelized, but was 250 miles long in its pre-urban development meandering state.  It's a rare river as it has both fresh water and salt water sections. 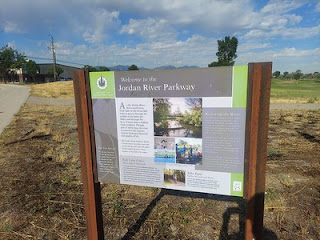 The effort to revitalize the river is only about 10 years old, and is spearheaded by the Jordan River Commission.

The river is paralleled by the Jordan River Parkway Trail.  So far, there's a fair amount of interpretation signage, especially by the Salt Lake City Parks and Public Lands agency, which has a superb signage program.

They've done a decent job with signage and the creation of trailheads, although there is significant room for iterative improvement.  They don't appear to have a regular program of updating signage and maps.  They have some boat launches, and are in the process of adding more. 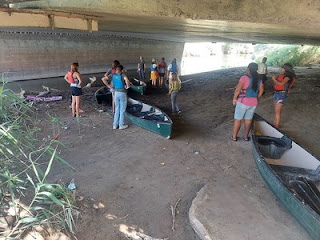 We used an informal launch, under the bridge over the river at 3300 South.

Not unlike how I argue that the position of the Potomac River relative to DC's commercial districts is not beneficial for commuter water taxi and ferry services, the Jordan River Parkway Trail doesn't seem to be particularly well placed for providing the kind of integration of biking/walking and neighborhood-community mobility where you can accomplish trips like grocery shopping.

A couple points in Salt Lake City are near a large supermarket and a small but developing commercial district--although I still have to bike the section from North Temple to the Davis County Line to see what other adjacent opportunities might exist.

But the section I rode for the first time out of the city has no such links--but there are many miles more for me to check out.  Although I have to say I was impressed that the section from 1700 South in Salt Lake City to and past 3300 South in the City of South Salt Lake did not require crossing roads, which was cool.

Separately, Salt Lake County has a Watershed program and a great publication, Stream Care Guide: A Handbook for Residents of Salt Lake County.  The unit sponsors an annual Watershed Symposium, which this year is November 16th and 17th, and is a great example of building community support and engagement.

Great example of turning what used to be a agricultural/water system artifact into something that improves property values.

I ridicule the Anacostia Cleanup the same way; but just that into a larger principle. How to take something awful and old and turn in into new and shiny.

Quality of the materials linked is very high. I'm comparing it to NPS in DC which is a low bar.

Probably dating myself, but this is the 1970s earth day love that is useful -- a reminder that we are not so separate from the natural world as it may seem.

Funny thing about Jordan River initiative is I'd argue that they need to continually improve. E.g. the maps and directional signage are about 7 years old--those are put up by the Jordan River Commission. The interpretational signage is put up by the individual jurisdictional partners. And Salt Lake's system in especially good (we're using it as the template for a signage system for Sugar House Park).

I had a discussion with a guy on Reddit who is older and he made the point that you could put in some exercise equipment etc. (It happens that the City of South Salt Lake is really big in it for their parks.) He's right. That's why JRC needs to update.

Speaking of high quality, the trail along the S Line Streetcar in Salt Lake/South Salt Lake is also super well done. (The streetcar has the same issues as H Street's in that it isn't particularly useful because it doesn't go far enough.)

That one especially is a development priming device. Except for the fact that at parts of it, they just aren't allowing enough density.

Then again, for Sugarhouse proper in Salt Lake City, a lot of the residents complain about change and over density. OTOH, it does truly create the conditions for real walkability-bikeability-transit.

wrt Jordan River and raising property values, I just don't know. In Salt Lake it goes through the poorer side of the city, although it's all relative. I haven't ridden it much out of the city yet (except the day I went canoeing) and it doesn't seem to be proximate to a lot of real estate potential.

But in theory, yeah. It's really cool.

2. When I was doing the Anacostia thing (which crashed and burned separate from me), I did make the point that the city could have treated it, and reached out to PG County similarly, equivalent to the Pennsylvania Trail Towns initiative along the Great Allegheny Passage.

Basically revitalization is about seizing opportunities.

3. My biggest realization about Salt Lake City Westside is the lack of a center. I met the Councilman from there last night and had a great conversation with him on these kinds of issues. We'll see where it goes.