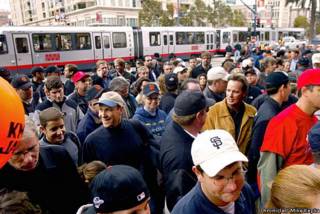 "You can drive to the game, sure. But why bother? It's more fun to ride along the Embarcadero on a streetcar full of baseball fans...This doesn't mean cars are bad. It just means the other ways of getting around should be at least as easy. Common sense, no? " (Photo and text from the San Francisco Chronicle.)

John King is one* of the best urban design journalists in North America. The photo above is from the article "Opening Day Distraction Why the ballpark was a great idea, four years later." As he says "In short, Pac Bell Park is a brick-paneled seminar on urbanity. Let us study the lessons taught by this one really smart - but so gosh-darn cute! - building." The lessons are:
Rather than bludgeon you with the reasoning, read the article yourself. (For John King's article about Petco Park in San Diego click here.)

This link provides information on Cleveland's Waterfront surface rail line, which offers public transit connections to the Cleveland Rock and Roll Hall of Fame and the Cleveland Browns Stadium. Jacobs Field, the home of the Cleveland Indians, is an easy walk from the Tower City complex, which is the major Downtown transfer point for each of the surface rail RTA lines.

______________________
* Besides John King, the best urban design writers in North American newspapers are Whitney Gould from the Milwaukee Journal-Sentinel, Christopher Hume from the Toronto Star, Inga Saffron from the Philadelphia Inquirer, Steven Litt from the Cleveland Plain Dealer, and architecture writers Blair Kamin from the Chicago Tribune, Ed Gunts from the Baltimore Sun, and Beth Dunlop from the Miami Herald, although now Beth is an independent contractor and doesn't write as frequently. Would that we had as great coverage on urban design in the Washington Post.