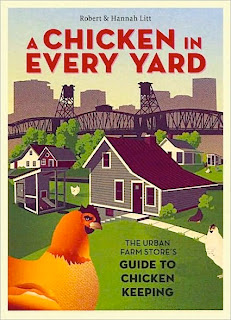 Seeing this book at Takoma Park's Now & Then gift shop yesterday reminded me that I had been meaning to write about backyard chickens based on a recent experience in Salt Lake City.

There are many initiatives around the country to legalize chickens in cities.

But many cities have pretty onerous requirements, with requirements something like the placement of a chicken coop 100 feet away from each lot line, making it almost impossible to site a chicken coop on urban sized lots (our lot is pretty big, 50 feet wide and 150 feet long, but our house is probably 25 feet on each side from our neighbors).  See these somewhat old articles from the Post, about DC area regulations, "Hot Chicks - D.C. Area Laws on Raising Chickens" and "D.C. residents fight to raise poultry in the city."

... the regulation requires a coop to be set back so far from neighbors that you would have to have a least an acre of land, which effectively denies chickens to city dwellers. Another provision also prohibits coops within 50 feet of a home, another deal-breaker in a rowhouse neighborhood.

Ernst then found an ally in her D.C. Council member from Ward 6, Tommy Wells. He has introduced legislation that would allow residents to get a permit to keep chickens if they have the written consent of at least 80 percent of the neighboring property owners.

Basically, your lot needs to be about one acre in size, which excludes more than 95% of all DC properties.  Even with the proposed change, I don't agree with a 80% requirement for agreement by property owners.  You only need a couple people to disagree and then you're forbidden.

In September, on vacation, we stayed with friends in Salt Lake City.  They live in a neighborhood with a similar spatial pattern to ours, so legally, if they were in DC they wouldn't be able to have chickens.  They did, with their chicken coop at the far rear edge of the lot line.   Distance between houses is probably about the same.

The chickens were not noisy at all, pretty quiet actually.  Although this depends on the breed, and whether or not you have roosters--roosters make noise.

(Sharing backyards is a kind of variant of BSA.  See "The Shared Backyard: Homeowners Exchange a Bit of Privacy for More Garden and Socializing" from the Wall Street Journal.  We're probably not quite to that extent, but with one of our neighbors, we're likely to install a gate opening between our yards.)

They have 5-6 chickens and would produce far more eggs than one household ought to consume.  But when you share them across 3 households, and sharing includes feeding and other duties--so if one of the families is away for a few days, the chickens are still being taken care of, it works out well, and cuts down on the insect population too.

And there is no question that the eggs taste a lot better than the typical eggs sold in the supermarket.

Love, love, LOVE this. You explain radical thinking in logical pragmatic terms. Need to see more of this. Thank you for posting. Peace (and anarchy) and all good,

I remember a couple of years ago, I was listening to panel discussion on CBC radio on this topic with regards to cities in Ontario, as keeping chickens is somewhat allowed in Guelph. One aspect that never crossed my mind was the animal control folks' (ie. SPCA) concern over what to do with stray/abandoned chickens. They already have too many unwanted 'gift puppies' to deal with in kennels, and don't have facilities to adopt urban chickens. They feared in the weeks following Easter especially, there would be an abundance of homeless chicks...

there was a story in the NYT a few years ago about a "wild turkey" or was it a chicken, in Brooklyn. It disappeared around Thanksgiving.

nice information.Have a medicine website. there is a medicine that seems to work, please check out website.Take this medicne as advised by the doctor that are easily available at the online medicine store in USA.