I didn't work long enough in the Baltimore County Planning Office to get a great feel for all of the county, let alone the section I was working in, because just the section I was addressing in full or in part was about 400 square miles, and I was there only for 10 months. 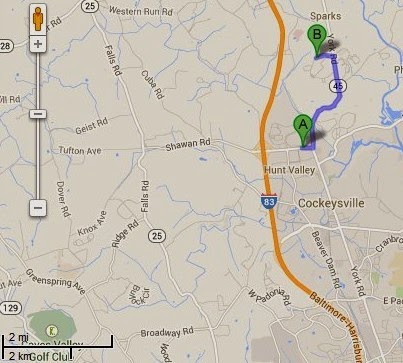 I was talking with an SHA planning official at a meeting last year, and he pointed out that if the light rail were extended from the end of the line Hunt Valley station a little bit north (under 2.5 miles, maps from Google Maps), it would be able to serve the major office complexes in Hunt Valley, including McCormick Spice, and Johnson Controls, vastly increasing the usefulness of the line.

Had I known about that when I worked there, I would have included this extension in my list of transit proposals for Baltimore County.  See the past blog entry "From the files: transit planning in Baltimore County."

Now that McCormick Spice Company wants to consolidate and is even suggesting that a move out of the state ("McCormick explores relocating headquarters from Sparks," Baltimore Sun) is possible, one of the enticements could be a light rail extension to a new consolidated headquarters. 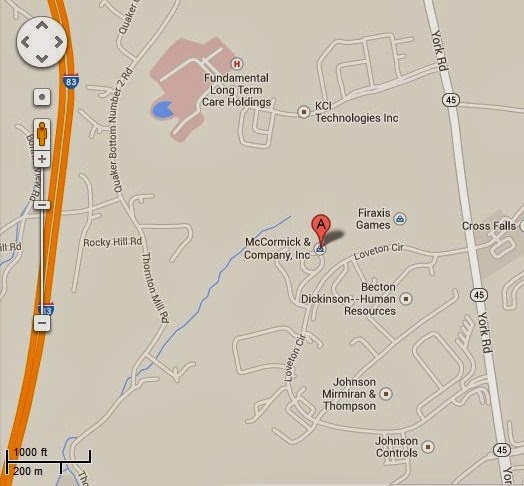 Of course, locating a new headquarters at the Hunt Valley station would make a lot more sense--or back in Baltimore City, where the company was originally based, but that wouldn't help the County--but I can't remember the nature of the land use, other than a big parking lot for the Wegman's at the Hunt Valley Town Center.

On the other hand, an extension to the office conglomeration in Sparks could entice people to stay and for the area to intensify, as well as to serve other businesses.

... especially if they could figure out how to upgrade and improve the light rail vehicles to something more attractive, although the vehicles while hulking and clunky and have a kind of industrial charm probably have a couple decades or more of useful life.

... yes, there are issues of polycentric, sprawling transit lines, but the office agglomeration is already there and it would be better for it to be served by transit than not, and by serving it with transit, it would reduce the desire to keep moving outward.

Heading up to the businesses at Loveton Circle would be great, it would also serve Loveton farms, which has some density in the north county.

The problems are two fold:

First the grade is pretty steep. Getting from the Hunt Valley mall site where the current station is up to Loveton would be tough. The elevation falls as it approaches Western Run, it then crosses it and faces a stiff climb up to Loveton. A trestle would be expensive and perhaps unsightly for the rich folk who live up there.

Second the local population would fight tooth and nail, they like being away from transit and the city.